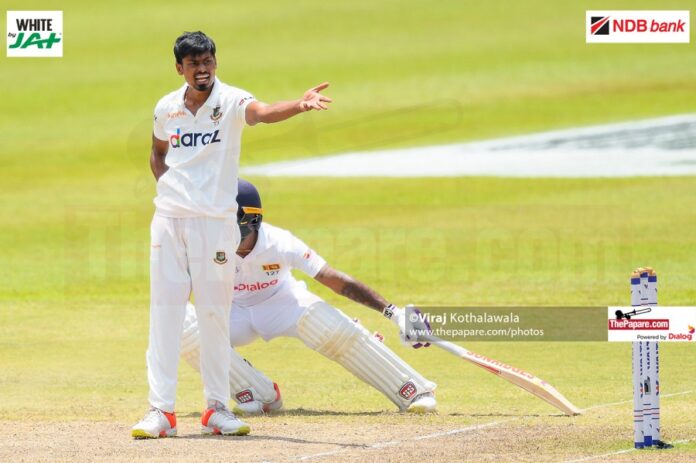 The battle at the bottom of the World Test Championship table produced a series that wasn’t the best advert for Test cricket, the docile Pallekelle pitch combined with the limited ambition of two struggling teams, resulted in frequently forgettable passages of play. It was only midway through the second Test when the pitch came alive and an unknown 22-year-old made an indelible mark, that things got interesting.

The green tinge to the wicket at the start of the First Test was an entirely false indication of how it would play over the next 5 days. A match aggregate of 1,289 runs for 17 wickets, 7 of which were claimed on the last day when the game had effectively ended as a contest, tells its own story. The bowlers on both sides toiled for little reward while the batsmen were able to take their time to play themselves in and then feast on the many runs on offer. Choosing to bat first, Bangladesh were more than happy to amass 541-7 declared, particularly as they came into the match off the back of 8 consecutive losses across all formats.

Tamim Iqbal raced out of the blocks for an entertaining 90 and skipper Mominul scored his first century abroad, but it was Najmul Hossain Shanto’s 163 which stood out. An unimpressive start to his fledgling career led to loud calls to drop the young left hander ahead of the series. His century only temporarily silenced critics as his remaining 3 innings produced a meagre 26 runs, including 2 ducks. In reply, for Sri Lanka it was a case of “anything you can do I can do too”, as they chalked up 648-8 declared and, in the process, made the draw inevitable.

The Pallekelle pitch curator would have been the most nervous person in Kandy on the eve of the Second Test, his batting friendly creation for the previous match had earnt a demerit point. His anxiety would have increased considerably over the first two days as Sri Lanka once again reached a position of strength, by accumulating runs at a steady if unspectacular rate. 493-7 declared was achieved on a pitch that once again gave the bowlers scant support.

The tourists, however, were unable to respond in kind. On day 3, the pitch began to show signs of turn, not the kind of sharp spitting turn characterised by England’s recent traumatic Ahmedabad experience, but it was turn all the same. Step forward Praveen Jayawickrama, a little-known left arm finger spinner. The debutant made full use of assistance from the pitch, finishing with the best bowling figures for a Sri Lankan on debut, 6-92 and eventually 11 wickets in the match. Bangladesh’s sub-par 251 was a reflection of several long days spent in the field and by not enforcing the follow on, Sri Lanka consigned the visitors to one last forlorn bowling stint. A target of 437 was eventually set, it never looked likely to be achieved. Bangladesh just about clung on until the fifth day, but a brittle and long tail meant that a 209-run win was a formality.

The player of the series award was justly awarded to Sri Lanka skipper Karunaratne. In the First Test, apart from the immense levels of concentration needed to score 244 runs, he spent almost the entire match on the field. Such endurance deserves special recognition. His series tally of 428 runs at an average of 142.7, coupled with his unfussy captaincy has highlighted just how invaluable he is.

But it was Jayawickrama’s stunning debut which grabbed the headlines at the end of the series, a fourth-choice spinner who was given his chance because of fitness issues and injuries to those ahead of him in the pecking order. His wickets were the product of subtle changes in angles and flight. His intelligent bowling outfoxed batsman after batsman, perhaps surprising given that Bangladeshis are accustomed to facing a disproportionate diet of left arm spin.

Jayawickrama’s dramatic debut, upstaged the more exalted spinners of Bangladesh. Although Mehidy and Taijul did provide a measure of control, they rarely threatened to run through the Sri Lankan batting order. It was a similar case in Dhaka a few months ago when Rakeem Cornwall’s 9 wickets in the Second Test, on a less than responsive pitch, again highlighted the shortcomings of the Bangladesh spinners.

What did it go wrong for the Tigers?

Where to start? Mominul’s meek brand of captaincy typified by defensive fields when an opportunity to gain the upper hand presents itself, added little. Even on unresponsive surfaces, there were small windows where the game might have turned towards Bangladesh’s favour. At 190-3 in their first innings of the First Test, Sri Lanka showed signs of wobbling at the end of day 3, but an empty slip cordon allowed Dhananjaya off the hook. His eventual 345 run partnership with his captain broke plenty of records, as well as Bangladesh’s resolve.

Although Tamim was in supreme touch throughout the series, his inability to score a match defining century will pain him. So too will the manner of his recent dismissals; in the First Test he guided the ball to wide slip in an attempt to pick up a single to third man, and further back, in the Second Test against the West Indies he offered a simple catch off the innocuous bowling of Brathwaite.

In the Second Test first innings, although Jayawickrama cleverly changed the angle of attack by going around the wicket and slanting the ball across Tamim, such an experienced campaigner should have done better than to prod at the ball with the bat edge. Not that Tamim was the only senior player culpable of making it easy for the opposition, after being well set. In the same innings, Mominul fell to a full toss which hit him flush on the boot and Mushfiqur was found fatally on the back foot to an arm ball.

The ensuing batting collapse exposed Bangladesh’s fragile confidence, as did the coach’s comments after the day’s play. Russell Domingo said that, “All teams reach a breaking point. Our breaking point came this afternoon when we were batting. It has been a tough day for us.” Although it wasn’t exactly conceding defeat, it was an odd pronouncement to make halfway through a Test match.

A positive spin on Bangladesh’s travails would be that one or two bad days at the office, combined with losing a vital toss, led to a series defeat. And if you look hard enough among the wreckage of defeat there are things to be glad about. Taskin’s re-emergence in Test cricket is the single biggest plus that Bangladesh will take away from Sri Lanka. He led the attack with a big heart and consistent pace. While a haul of 8 wickets in the series points to mediocrity, given the lifeless pitches he was up against, it was a significant achievement.

He bowled 30 overs in an innings in the First Test, he couldn’t recall bowling more in a first class game, he followed it up with a further 38.2 overs in the Second Test. If anyone deserves a rest, it’s him. His workload will have to be managed wisely if his injury prone body is to resist the rigours of red ball cricket. Taskin, bowling in tandem with the impressive rookie Shoriful, was perhaps a glimpse into a brighter future. But for the most part, whatever shape the next edition of the World Test Championship takes, Bangladesh will be keen to bury memories of their first foray.