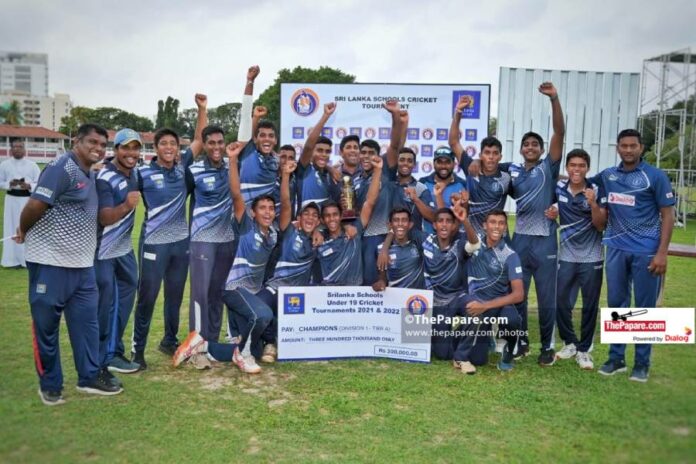 St. Joseph’s College were crowned champions of the SLSCA U19 Division 1 – Tier ‘A” Limited Over Cricket Tournament, as they beat Richmond College by 106 runs in the final worked off today (20th April) at Police Park Grounds, Colombo.

The number three batter Shevon Daniel impressed with the bat building crucial stands of 57 & 86 runs with Jayawardena and Dunith Wellalage respectively as Joes posted a solid score of 257 runs in the allotted 47 overs.

Daniel top-scored with a brilliant knock of 80 runs off 88 balls with 6 fours and 3 sixes. In the bowling department, it was Malsha Tharupathi who starred with the ball for Richmond College taking 4 wickets for 50 runs.

Chasing 258 runs to win, Southern boys got off to a poor start losing half of their side for just runs putting huge pressure on the tail-enders. Number 6 batter Malsha Tharupathi who starred with the ball earlier for Richmond stood out with the bat as well scoring a fighting half-ton, but it wasn’t enough to put his side over the line as Joes registered a comprehensive win to clinch the title.