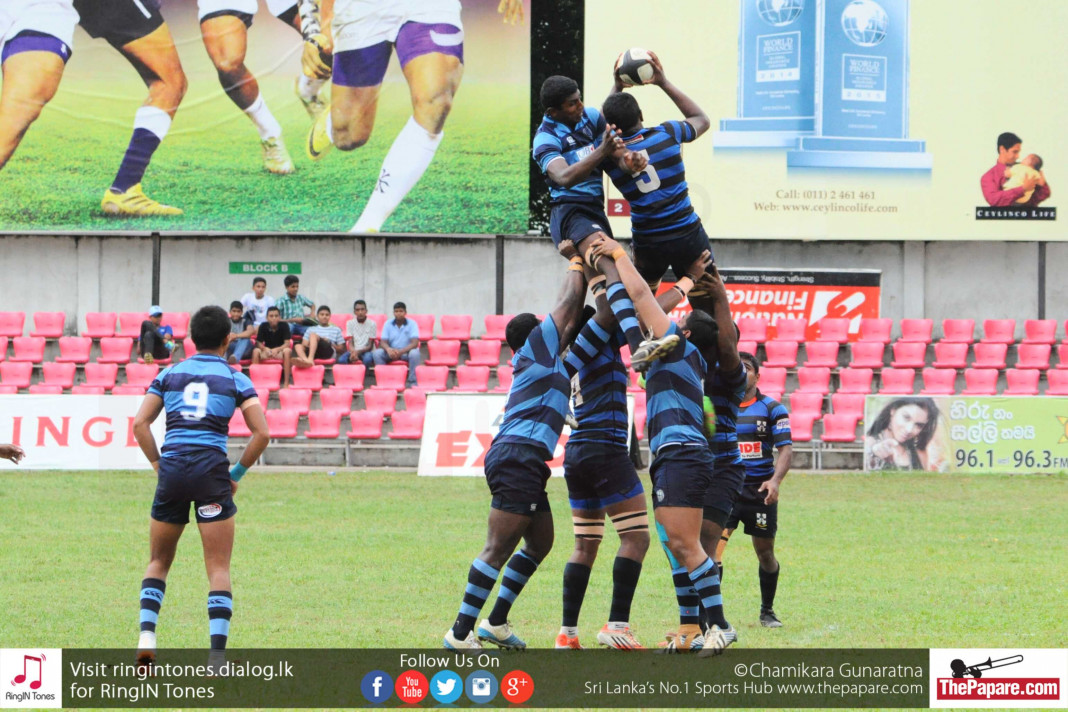 S. Thomas’ College and Wesley College locked horns at Havelock Park today in their final group game in round 1. The game, which was also played for the Sir Oliver Goonathilake shield for just the 2nd time, turned out to be a muddy affair following some heavy rains. S. Thomas’ retained the shield with an error riddled 19 points (2 Goals and 1 Try) to Nil win.

Many anticipated a close contest between the high riding Thomians and Wesley who have had some close encounters in most of the games they have played this season. The heavy rain that began to pour down midway through the 1st half spoiled the game for both teams as well as the enthusiastic fans in attendance. The home team made a mess of the first kick off and off the ensuing scrum the Wesley backs showed a glimpse of what they are capable of with a lightning flash move which foxed every Thomian defender except Full back Mayon Wijewardane who kept his cool and brought down the Wesley player with a 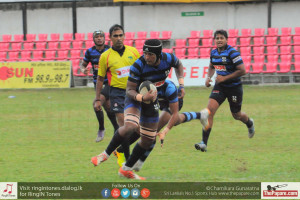 solid tackle. This proved to be only a false dawn for the visitors as from there onwards it was all S. Thomas’ who dominated. The big Thomian front row kept pounding on the opposition front door but just couldn’t break the deadlock as Wesley defended with all their might. Even an easy penalty kick taken by Center Ashwantha Herath managed to ricochet off theup-right to keep the scores at nil all. It took almost 35 minutes for the opening score when center Sharith Nanayakkara finally managed to cross the whitewash after some good work by the Thomian forwards who drove up the middle closer to the try line before the backs finished it off with ease. Winger Dion Dias converted and the Thomians went into the half time break with a solitary converted try under their belt.

Due to the heavy rain and lightning conditions that prevailed over the venue, there was a delayed start in the 2nd half. Wesley probably knowing that if the game were to be called off after the 50th minute, the leading team would be awarded a win; started off well with a few phases drifting the ball 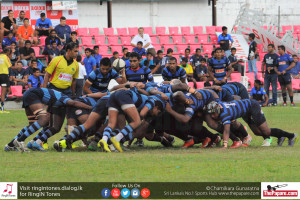 from one side of the park to the other. However a loose pass by the Wesley fly half saw the Thomians pouncing on the loose ball and surging ahead into the opposition 22′. The ball was sent out wide to the backs and Dion Dias stepped through the Wesley defense to score a brilliant try. Dias put over the easy conversion himself as S. Thomas’ had now a bit of a cushion in the score line. (14-00) This was all the scoring for the next 35 minutes as both teams failed to settle down on a muddy waterlogged pitch. The visitors tried all what they could but just couldn’t penetrate the Thomian defense. S. Thomas’ too had many chances to score, but poor handling and decision making let them down in the final third. Thomian winger Navin Henakankanamge too received a very little possession in order to create any chances. No.08 Sachitha Jayathilake who had constantly troubled the Wesley defense with his big frame sealed the match in the dying stages with a try. The Thomians were close to the goal line thanks to Jayathilake’s initial burst and a few phases later he shoved his way through from close range and scored beside the uprights. Scrum half Senal Silva missed the easy conversion as the referee blew for full time. (19-00)

S. Thomas will be somewhat disappointed that they couldn’t get any flow into the game, albeit due to the weather and ground conditions. However they will come into round 2 full of confidence as they along with Isipathana are the only two unbeaten sides this year. Wesley college too will advance to the Cup Segment of the league for the first time under this new format after finishing 4th.