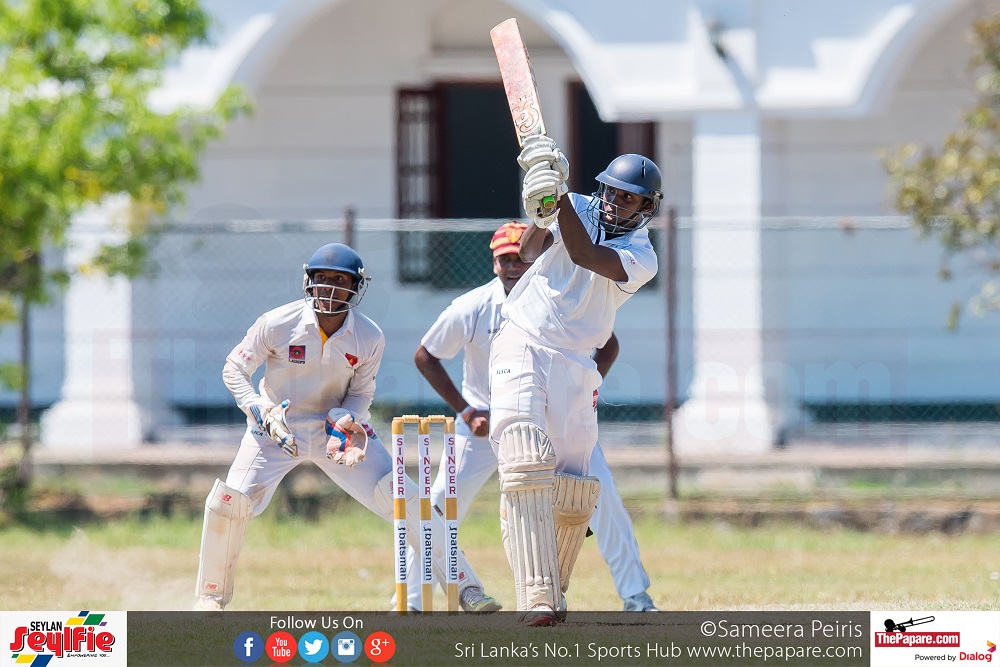 Avindu Theekshana and Sandun Mendis starred as Richmond College, Galle made a smashing comeback to take major honours against Ananda College, Colombo in the opening day of the Singer U19 Schools Division 1 League Final which started today at Thurstan grounds.

Richmond College skipper Kamindu Mendis won the toss and elected bat first on a dry surface. The decision soon backfired on the lads from down south as they lost four quick wickets in a cantor (22/4) with star batsman and under 19 skipper Kamindu Mendis along with Dhananjaya Lakshan were sent back into the shed in quick succession.

Richmond lost two more wickets in a hurry before Avindu Theekshana and Thaveesha Abishek put on a fighting 76 run partnership for the 5th wicket. Thaveesha lost his wicket at a crucial stage prior to the lunch break after scoring a well-made 46 off 81 deliveries.

Left-handed Theekshana who helped Southern Province to the SLC U19 Provincial title yesterday went onto compile a much-deserved half-ton just after the lunch time interval as he was joined in the middle by Ravishka Wijesiri. Their stand of 36 soon came to an end when off-spinner Supun Waragoda spun a web around Ravishka to cap his wicket for 21.

Fresher Kasun Tharaka joined Avindu Theekshana for the 7th wicket partnership in the middle as Richmond looked to press on the accelerator to surpass the 200-run margin.

After the tea break, Ananda College hit back strongly with two timely wickets with Theekshana trapped in-front of the stumps off Waragoda. He stroked an excellent 80 runs off 160 deliveries that included 10 boundaries and his partner Kasun Tharaka for a handy 25 runs.

Ananda College walk into the final of the Under 19 Schools Cricket..

All-rounder and younger brother of Captain, Kamindu, Sandun Mendis and wicket keeper batsman Duveen Kalansuriya got together and constructed a match-saving, unbroken 105-run partnership for the 9th wicket to propel Richmondites to 307 for 8 wickets at stumps. Mendis stroked an unbeaten 64 off 99 balls, while Kalansuriya contributed with a classy 36 runs.

Waragoda was the pick of the bowlers as he picked up 4 wickets for 91 runs and left-arm spinner Asel Sigera chipped in with 2 wickets.

The game will continue tomorrow for day two.