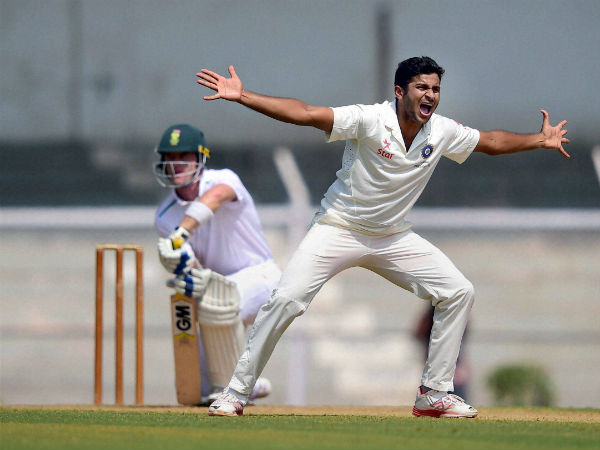 Mumbai fast-bowler Shardul Thakur is the only uncapped cricketer in India’s squad to tour West Indies for a four-match Test series to be held in July this year. The 17-member side will be skippered by Virat Kohli, his second overseas assignment since taking over as full-time captain of Team India in 2015. Ajinkya Rahane has been named Kohli’s deputy.

The 24-year-old Shardul Thakur was a surprise pick in the 17-member squad with the selectors reposing their faith in the line-up that had played the last Test series against South Africa at home.

Thakur was rewarded for his consistent performance in the domestic cricket where he took 41 wickets in 11 matches for Mumbai at an average of 24.51. His best figures in an innings were six for 107.

Varun Aaron, who was part of the team during the series against South Africa, was dropped with a fit-again Mohammed Shami returning to the squad which will have Ajinkya Rahane as its new vice-captain.

The team, to be led by Virat Kohli, also had no place for veterans such as Gautam Gambhir,Harbhajan Singh and Yuvraj Singh despite their decent performances in the ongoing Indian Premier League. The tour of West Indies comprises four Tests in mid-July but the exact dates for the series are yet to be formalised.

“No one has been rested. No one wrote to BCCI or called us (to say) they were not available or they should be rested. It was the decision of the selection committee to pick a young side for Zimbabwe and another side for West Indies,” selection panel head Sandeep Patil told reporters.

Kohli has been rested from the limited-overs series against Zimbabwe, scheduled from June 11 to 20, along with Murali Vijay and Ashish Nehra, who is due to undergo a surgery.

The selectors have opted to pick a completely new-look team for the tour of Zimbabwe with Vidharbha left-handed opener Faiz Fazal, off-spinner Jayant Yadav, Punjab middle-order batsman Mandeep Singh and IPL star Yuzvendra Chahal being the uncapped players in the side.

Mahendra Singh Dhoni will captain the squad as he will be largely out of action due to India’s busy Test schedule this year.

Following this, they will embark on a tour of West Indies in July. Although the schedule hasn’t been announced yet, the tour will feature only four Test matches.