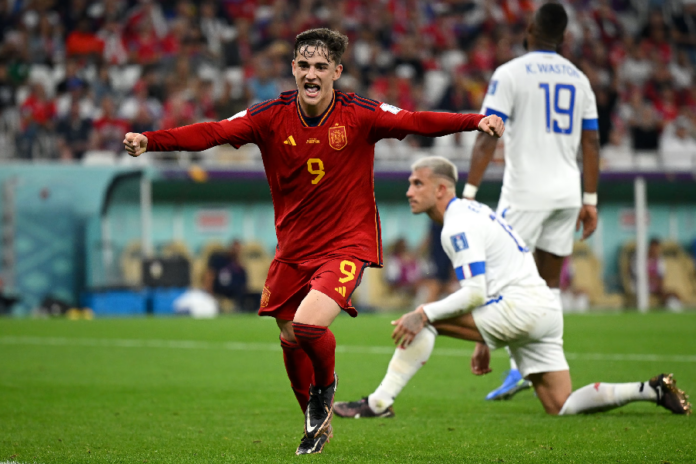 La Roja were in scintillating form as they put seven unanswered goals past an outclassed Costa Rica team.

No fewer that six separate players found the net for La Roja, with Ferran Torres bagging a brace and Gavi becoming the third-youngest scorer in the tournament’s history.

Dani Olmo started the goal spree when he dinked the ball over Keylor Navas after 10 minutes, having shown wonderful close control to fashion the shooting position. Marco Asensio doubled the lead soon after, spinning the ball into the far corner from Jordi Alba’s pinpoint cross.

Torres joined the part with a penalty on the half-hour mark before adding a second early in the second half after capitalising on some confusion between Navas and Bryan Oviedo.

Gavi then made it five with a stunning strike, and if Costa Rica felt it couldn’t get any worse at this stage, they were to be sorely disappointed. Stoppage-time efforts from Carlos Soler and Alvaro Morata rubbed salt in Tico wounds and put a spectacular seal on a statement win for the Spanish.

Gavi had made history simply by taking to the field, becoming – at 18 years and 110 days – the youngest Spanish player ever to take part in the beautiful game’s greatest competition.

But when he found the net with the pick of his team’s seven goals – a volley executed with typically flawless technique – it left him behind only two men, Manuel Rosas (18 years, 93 days) and the great Pele (17 years, 239 days), on the World Cup’s all-time list of youngest marksmen.

There have only six more resounding World Cup wins than Spain’s demolition of Costa Rica. There have been three 8-0s, two 9-0s and the biggest victory of all: Hungary’s 10-0 trouncing of El Salvador in 1982.

Luis Enrique, Spain coach: “This was a very special game for us. It is usually difficult for us to start competitions, but we have done very well. It has been a very important victory. I had always read that there was a lack of goals in this team. But although we still don’t have a clear scoring reference, we have many players who score goals.”

Luis Fernando Suarez, Costa Rica coach: “They kept the ball throughout the match. We did the exact opposite. We didn’t have possession, we didn’t really attack. They played an amazing game and we didn’t.”