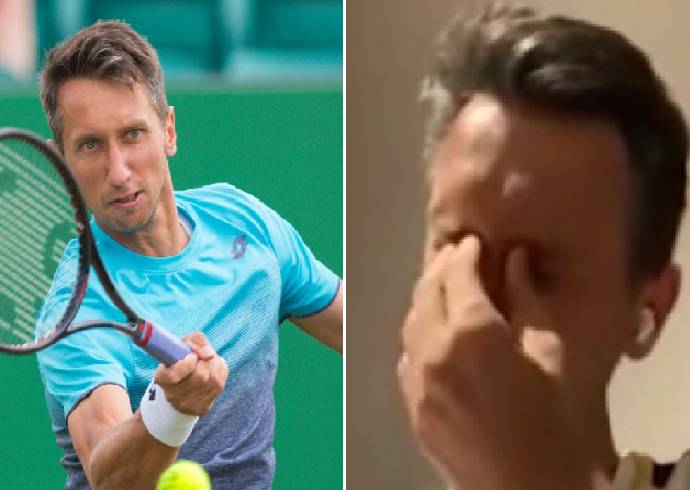 (CNN)Ukrainian tennis star Sergiy Stakhovsky was vacationing with his family in Dubai when Russian forces invaded his home country.

He made a tough decision to leave his wife and three young children at their home in Hungary and return to his homeland to join the fight. He’s now a member of the army reservists helping defend the Ukrainian capital of Kyiv.

As a Russian military convoy closes in on the city and dread hangs in the air, Stakhovsky, 36, says he is prepared to do whatever it takes. He told CNN’s Brianna Keilar on Thursday that his goal is to help save Ukraine for its citizens and his children.

“I was born here, my grandparents are buried here, and I would like to have a history to tell to my kids,” he said. “Nobody here wants Russia to free them, they have freedom and democracy … and Russia wants to bring despair and poverty.”

Stakhovsky had retired from professional tennis only weeks earlier at the Australian Open, ending an 18-year career. Now he’s hunkered down with his fellow civilian soldiers in Kyiv — and struggling with his decision.

He feels guilty about leaving his family

Once the 31st-ranked men’s player in the world, Stakhovsky once beat Roger Federer in a major upset at Wimbledon in 2013.

In January, he was playing his final professional match at the Australian Open. Now his retirement days involve fear and uncertainty, listening to air-raid sirens and explosions at all hours.

Stakhovsky said he believes people like him — untrained in warfare but fiercely patriotic — make up a big part of the fighters defending Ukraine.

But he said leaving his wife and children to put himself in harm’s way was not an easy decision.

“It’s impossible to make that call without hesitation. I have a wife and three kids,” he said. “If I would stay home, I’d feel guilt that I didn’t come back (to Ukraine), and now I’m here, I feel guilty that I left them at home.”

His wife also is struggling with his decision, he said.

“Of course, she was mad,” he said. “She understood the reason for me, but for her it was a betrayal. And I totally understand why she feels that way.”

He said they haven’t told their kids, all under age 7, who likely believe he’s at a tennis tournament.

The Ukrainian government has asked men between ages 18 and 60 to fight against the Russian invasion.

Other sports stars including Yuriy Vernydub, a manager with FC Sheriff Tiraspol in a Moldovan soccer league, have returned to Ukraine and taken up arms. So have champion boxers Oleksandr Usyk and Vasiliy Lomachenko.

Stakhovsky faces similar fears and prays he’ll make it out alive and get back to his family. Civilian fighters like himself in Ukraine have received “a basic class on how to shoot,” he told CNN. “I think people like me will be the last resort.”

And while he hopes he doesn’t have to shoot anyone, he said he will if he has to.

“I’m not sure there’s one individual who’s ready to tell you now whether he’s ready to sacrifice life. I want to see my kids … I want to see my wife, that’s my goal,” he said. “If a missile comes into the house, is that sacrificing your life? No. It’s just being killed.”

He hopes that when his children find out the truth about his whereabouts, they’ll understand why he chose to fight for his homeland.

“Because a country which I love … I would like it to still be on the map, develop, become better, become European more, and eventually my kids can see the transformation of my country.”