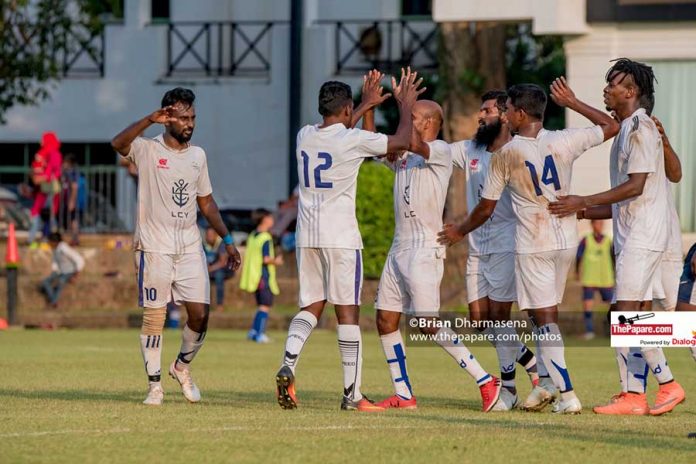 Serendib FC finished 2nd in the Super Six round of the competition whereas SLTB SC finished 3rd in the same stage.

Mohamed Rajsheron got the first glimpse at goal as early as the 4th minute when Mohamed Aashi sent a good cross from the left wing. Sheron unmarked in the far post climbed high but only managed to head it wide.

Both teams played with purpose in the opening stages of the game and both teams looked evenly poised for a good game through-out the 90 minutes.

SLTB settled down first and looked good with the passing and the combination play. A.N Madushanka came close with header after winning a corner. His charging header did not connect as he sliced it away.

Serendib’s opportunities came in the way of free kicks, however some of the calls were questionable and went in the favour of the Mawanella Club. Riyas Mohamed taking majority of it did not make use of the set pieces.

In the 25th minute Evans Asante flicked home a brilliant free kick by Rajsheron to give Serendib FC the first goal as the Mawanella crowd brought the roof down of the grand stand.

Soon after the goal R. Jagadesh too came close to increasing the lead with a long-range effort for Serendib. His shot hitting the woodwork before going out of play.

Shanmugaraj Sanjeev was then given a free header to equalize for SLTB with a cross coming from S. Weerasuriya playing in the right flank. Sanjeev could only head it to the ground for an easy collection for Serendib goalkeeper Mohamed Najman.

Despite going a goal down it was SLTB who played a fluent game and created space to attack. Their play in the final third let them down as the final pass went astray or was cut off by the defense.

Second half started with an incident involving Sanjeev and A.D Madumal. Sanjeev threw a fist at Madumal after the later fouled. The referee was correct in showing a straight red card at Sanjeev.

With a man advantage Serendib got a golden opportunity to increase the lead. Mohamed Aashir being on the end of a good long ball lobbed the ball way too far over as the on rushing SLTB goalkeeper Sudesh Suranga was stranded.

Evans Asante then made a brilliant run from his own half as the free kick set play of SLTB did not work out. Beating two defenders with his pace Asante glided the ball past a hapless Suranga.

Ruwan Chanaka then silenced the crowd with a magnificent free kick. His right foot curler from top of the penalty box left the Serendib goalkeeper Mohamed Najman flat footed as a glimmer of hope was raised for SLTB SC.

The tempo of the game went a notch high in the final 15 minutes as SLTB looked to find an equalizer whereas Serendib FC tried to hit on the break. Chamara Jayaweera came close for SLTB with an effort from range only to be palmed away by Najman off the goalline.

Rajsheron then put the game to bed with a breakaway goal as all the SLTB defenders were caught high up the field. Sheron went around the onrushing Sudesh and ease it to the back of the net. Asante giving the through ball to break the defense line.

Mohamed Aashir then missed the simplest of goal he would ever score. Asante beating the keeper crossed to Aashir who only had a defender and an empty goal. He managed to hit the all wide which was harder than scoring.

The game turned ugly as SLTB players continued to argue with the referee on the calls which went against them. However, the main referee Jafran Athambawa controlled the situation well to ensure the game ended without any incidents.