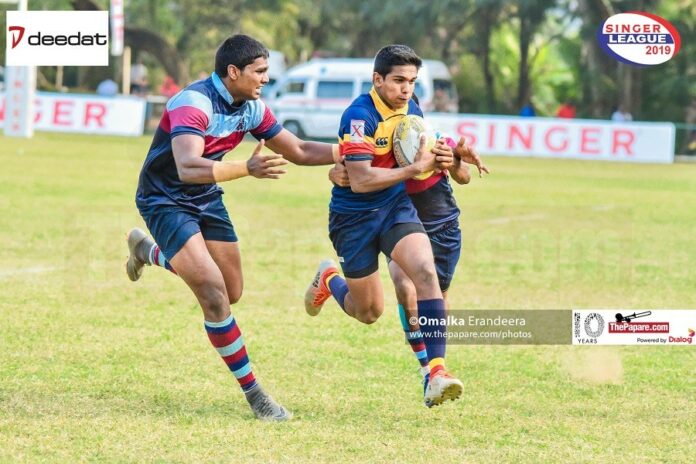 Trinity College were made to work; however, a second half blitz helped the hosts thump visiting Sumangala 46-14 at Pallekale as Schools’ 1st XV Rugby returned following a 2-year hiatus.

The hosts kicked off proceedings to mark the return of the game we love under warm, humid, 31-degree weather conditions at the home of the Lions.

The opening proceedings saw both sides feel their way into the game, however, handling and unforced errors gave the look of a season opener even though this was a friendly encounter between the two schools.

Trinity scored the opener of the game through lung-busting inside-centre Tevin Karunarathna, as the big lad bulldozed his way through the heart of the visitor defence. First-five Thamuditha Dodamwatta failed with the extras. (TCK 05-00 Summa)

The lads’ from Sumangala discovered their mojo after conceding the lead, as the hosts were found wanting on numerous occasions.

First it was Ishan Srinath who added the finish to a contender of try-of-the-season, finishing off a move which began by Mohomad Arfath deep inside his own 22.

Moments later, the visitors doubled their try tally through inside-centre Isuru Chanaka, as he reacted first to snipe down the short side to score in double quick time, leaving the hosts searching for answers. Mohomad Arfath added the extras on both occasions, as the visitors raced into a surprise lead. (TCK 05-14 Summa)

The game drifted side-ways as neither team was able to breakdown their opponents as the first half was soon drawing to an end.

However, the Trinity Skipper, Thidas Thanthrige, had other ideas as he managed to bump his opponents and score after being set up by half-back Sheveen Premarathne. Thamuditha Dodamwatta failed with the extras on the brink of the first half. (TCK 10-14 Summa)

There was still time for action, but the action did not favour the visitor as prop forward Banuka Imesh was sent to the bin for a high shot, as a scrappy but entertaining first half of Schools’ Rugby ended setting up a promising second half.

A game of two halfs this time saw the hosts dominate a span of 17-minutes in which they managed 4 tries, converting 3 in the process to grab the game by the scruff of its neck and take it away from the visitors.

Forwards Kaveesha Edama and Dulara Alawattegama scored within minutes – first the prop-forward  Edama from open play, and Hooker Alawattegama next from the tail of a maul to see the hosts race back into the led.

Centre Tevin Karunarathna scored his second of the game, as he found himself twisting, turning and racing through the heart of the Sumangala defence to crash under the post. First-five Thamuditha Dodamwatta added the extras on all 3 occasions as Trinity seemingly took an unassailable lead 17-point lead. (TCK 31-14 Summa)

A half in which the visitors failed to gather any momentum or ball, saw Trinity end it with 3 further unconverted scores to add the cherry on top of the already sweet cake.

Replacement flanker Chameendra crashed over from the tale of a maul in similar fashion to Hooker Alawattegama to score the host’s 6th try of the game.

Harsha Samarasinghe was handed pretty much the easiest try of his schooling career by fellow centre Karunarathna as he obliged, dropping off a dolly pass, without pondering of his hat-trick.

Thamuditha Dodamwatta laned a well weighted, graceful cross kick, as Minidu Jayasundara latched onto the ball on the bounce to score the 8th and final try of the game to put the visitors out of their Misery.

Dodamwatta failed to convert the final three conversions, as Trinity ended the game on a more familiar winning note, keeping the visitors scoreless in the process.