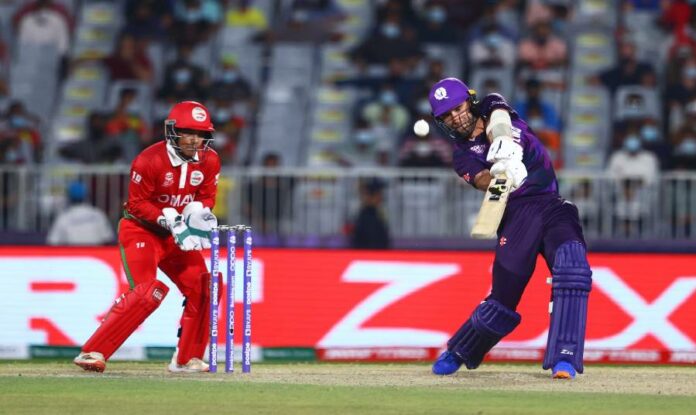 Scotland cruised to victory in the final Group B match, beating Oman by eight wickets to qualify for the Super 12 stage of the ICC Men’s T20 World Cup 2021.

The win meant Scotland remained unbeaten in Group B and finished as table-toppers with six points in Round 1 of the T20 World Cup.

Oman’s decision to bat first didn’t work out as well as they would have hoped as Scotland bowlers made the best use of the conditions to restrict them to 122 all out.

Spinners Mark Watt, Chris Greaves and Michael Leask gave away only 45 runs in nine overs as they kept a leash on the scoring in the middle overs. Among the pacers, Josh Davey bowled an excellent final over for Player of the Match-worthy figures of 3/25.

Chasing 123 for the win, Scotland skipper Kyle Coetzer set the tone with a 28-ball 41. Though he fell at the stroke of drinks, the in-form Richie Berrington and Matthew Cross got Scotland across the line, with Berrington finishing off in style with a four and a six.

After a sedate first two overs without any boundaries, Scotland broke the shackles with openers Coetzer and George Munsey stroking a boundary each to get the chase going.

The introduction of spin did not go as planned as Munsey welcomed Aaqib Ilyas with two fours.

After scoring his fourth boundary in the next over, Munsey was tempted with the short ball and he fell for the trap, giving Oman the breakthrough they were looking for.

At the other end, Coetzer chose the perfect time to return to form, with his first 40+ score since October 2019. The skipper relished taking on the pacers after the Powerplay, smacking two sixes and a four as the asking rate dropped to under five halfway through the chase.

Khawar Ali, brought in for this game, broke through at the stroke of drinks, scalping Coetzer to give Oman a glimmer of hope, but Berrington and Cross ensured there were no more hiccups as Scotland chased the total down with three overs remaining.

The home crowd in Oman were stunned into silence in just the second ball of the innings when in-form batter Jatinder Singh had to walk back for a duck. Confusion between the two batters saw both of them at the same end of the pitch, leaving keeper Matt Cross with all the time in the world to dislodge the bails.

It went from bad to worse for the co-hosts when Kashyap Prajapati, in a bid to up the scoring, was beaten for pace as he swung wildly, only to find the fielder at mid-off.

Ilyas eased the tension with a wonderful flick off the pads for a six to get the Oman innings going.

Scotland bowled brilliantly on a track that was aiding the bowlers and suffocated Oman for runs before Davey gave away a six and a four to Ilyas. The Oman opener was the only top-order batter who looked comfortable at the crease as he scored all the team’s boundaries in the Powerplay.

The introduction of the spinners kept the scoring in check and eventually paid off as Ilyas was forced to hit his way out, only to hole out at long-off.

Scotland keep the pressure on

Oman finally started to show some intent after the drinks break, taking the spinners on for two fours and a six in two overs.

Nadeem cleared the boundary for the second time in his innings but was lured in by Watt with a loopy wide delivery off the very next ball. Though he managed to time the ball well, it went straight to Berrington at covers who had to react quickly.

Maqsood survived a drop and a run-out off the same ball, with Kyle Coetzer first spilling a skier and then missing a direct hit with his opposite number well short of his crease.

Oman were bowled out off the last ball of the innings, with three wickets falling in the final over off Davey.