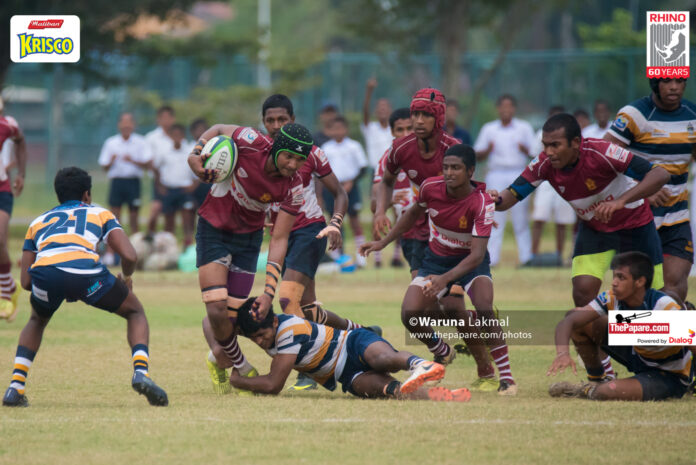 St Peter’s College came to the game with an outside chance of making it to the Super Round while Science College welcome an old nemesis, hoping to salvage some pride from the season. If Peterites won with a bonus point and Wesley College suffer a heavy defeat against Dharmaraja, the boys from Bambalapitiya would have had a chance of making it to the next round. However, they never looked like a team who deserved to be in a Super Round after another disappointing performance in the field.

The visitors started the game with the opening try through Vishenka Silva. The move started with the scrum as they ran the ball back and forth down the line and used their forwards to draw the Science College defense to the middle, which opened up space on the outside for Silva to find the whitewash. (SC 0 – 5 SPC)

Peterites doubled the score a few moments later through Silva who once again touched down after the forwards carried the ball inside the attacking 22m. Both conversions were missed by Emith Jayaweera. (SC 0 – 10 SPC)

After the second try, tables turned and Peterites lost all their momentum. It all started with their second-rower Chanupa Cooray being given the marching orders for an illegal entry. It paved way for Science College’s first try of the game through H. L. Kaluarachchi. The hosts used the rolling maul to push forward and after a couple of phases, Kaluarachchi was carried over the whitewash.

The second half was undoubtedly dominated by Science College. Some part of Science’s domination should also be given to the Peterites who kept giving away possession in crucial junctures of the game. Early on in the half, Science College fly-half, Nadun Kaveesha had two shots on goal but he failed to add any points to their tally.

All Peterites could do was rack up more and more handling errors and penalties. They didn’t make matters any easier for them when both Ridmal and Sader Hewagamage were sent to the naughty chair.

The two-man advantage opened up more spaces for Science College and they had enough motivation to keep pushing until the visitors break apart. Their resilience paid off when they found the second try through S. S. Aloka. It was once again from the line out, that the hosts managed to get closer using the forwards and finally Aloka sneaked through the traffic for the try. Despite missing a couple of penalties earlier on, Kaveesha added the extras under pressure to put his team get in the lead. (SC 12 – 10 SPC)

In the closing moments of the game, Science College was penalized a couple of times and it had them down to 13 men. Despite having the advantage, St Peter’s College was too clumsy to make a comeback into the game as the Referee blew the whistle at full time.