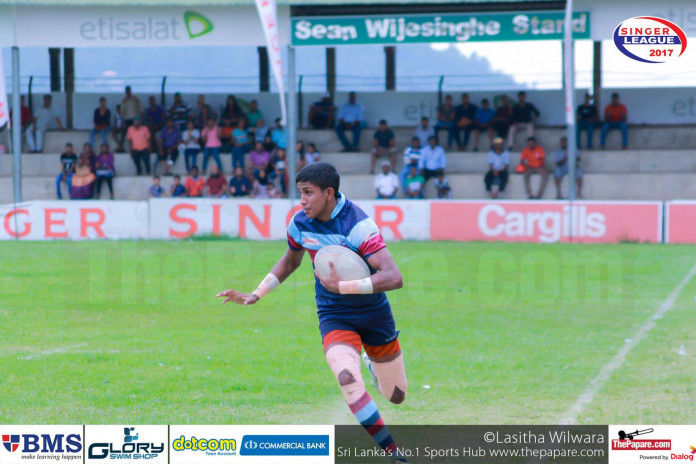 St Anthony’s College, Katugasthota ran in 6 tries to the 3 of the opposing Science team to win the final game of the season and emerge Plate Champions for the year 2017. The final tally was 43 (6T 5C 1P) points to 17 (3T 1C) points. After this defeat Science College will go back to the second division after coming up to the top in 2011.

Dinuk Amerasinghe started off proceedings with a try as Samuel Maduwantha who played fly half returning from a 5 week break gave him a nice long pass to barge through the defense. Maduwantha throughout the game made some excellent moves sucking in the defense and spreading the ball wide. He added the extras with ease from the left flank. (SACK 07-00 SC)

Science immediately replied through back to back tries by their forwards. They made strides into the Antonian half before eventually going over the try line through their not very bulky but strong forwards. The second try was courtesy of a lose pass by the Antonian scrum-half. Ishara Madusanka and Rohan were the tries scorers for Science as they went into the lead. Only one of the tries was converted. (SACK 07-12 SC)

St.Anthony’s bounced back through Dinuk Amerasinghe to score the much important try giving them back the lead and later Janidu Himsara went over for his try of the game. Both the tries were worked and spread to the line and the sheer strength saw them getting them over.

In between the Himsara and Dinuk’s tries Samuel Maduwantha slots through a penalty cleanly bisecting the posts. The referee awarded the penalty for a high tackle. (SACK 22-12 SC)

After the break it was all St.Anthonys although Science did manage to score a consolation try of their own. The Antonians ran in another 3 tries as they secured the much important bonus point and also this meant that they will go onto equal the tally of point of the Rajans but top them to win the points table on tries. Dinuk Amerasinghe ran his third try of the game which was a carbon copy of the first try he scored barged and stepping past the defense. Maduwantha converted with ease to extend the lead. (SACK 29-12 SC)

Jehan Seelagama was in the scoresheet for the time as the ball went to the line as he cut through the defense over the Whitewash. Samuel Maduwantha was again in the the artichect of the try and he was taken off by Nalaka Weerakoddy soon after the conversion. (SACK 36-12 SC)

Science got their next try as they ran it through their center and Number 13 Rohan from their own 22m line. It was a classic break and a treat to watch him stepping past at least two to three defenders and fending off a couple. He made the extras of his own try with ease. (SACK 36-17 SC)

Shashika Wijewardana made a ‘Sonny Bill’ style offload as he cut back out and stepped back in before back hand passing the ball to his prop to go over under the posts. Jehan Seelagama made the conversion. (SACK 43-17 SC)