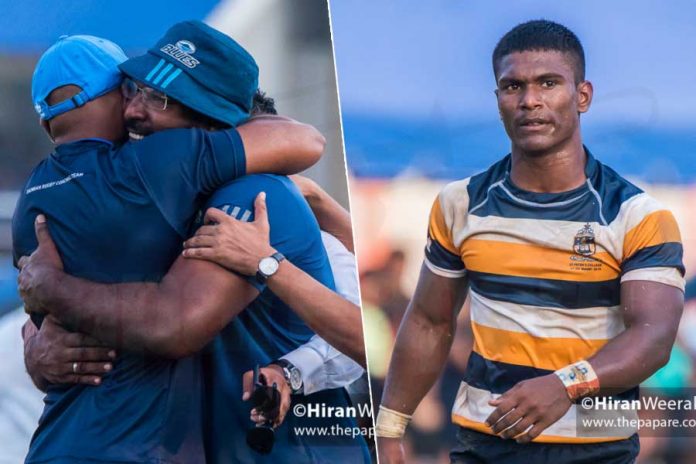 There is that old proverb about how a cat was set out amongst pigeons. When the king pigeon is a fanciful type and kardashianesque with all the supposed skills, outcomes a black cat with blue eyes and tears the script apart. It was poetry in almost perfect motion.  Where a season opener which was supposed to end in a bit of a miss-match, turned on its head.  It then became a match you couldn’t miss.

Thomas’ mustered all the courage it could, as if at the foot of Brokeback mountain and used their tactical know-how trained and executed by an Aristotle like Shamly Nawaz to bring down St Peter’s. It was a Black Hawk down. The big bird was shot and grounded.

Ten minutes in, it looked like a flamingo waltz. The Peterites were all over the Lavinians but … there was a monster twist to this tale. No one could truly imagine, after being 0-14 down, any team could come back to beat St Peter’s. It was quite the heist. Maybe as big as the bond scam– in Nigeria, of course.

SPC looked like they were in for a 50 pointer but instead, the game ended in a nail-biting thriller. An upset and one for the ages. That meant, the trophy was going to stay at Mount for another year.

What a riveting start to season 2019 Singer Schools league (SSL). This will possibly go down as the game which may change the course of the championship. It turned the title race on its head. Leaving most fans stunned. Not just Peterites but right across the spectrum.

All this, just one week in. One of the red hot favorites in St Peters got done like a breakfast by a team, who almost everyone had written off. Not yours truly being straight up. In my season’s early mail, a clear top pick for coach and team combo was Shamly Nawaz and STC. This to me is a critical form line. Critical.

Based on his work patterns in 2018 at Zahira, following through at Police SC for the DRL (winning the plate and beating Army 50-27, the team who beat Kandy at Nittawella), where he notched up 2 back to back upsets against Navy, as found by my win predictor. It is all quality teaching.

Even before taking a good deep breath, he and they deliver a knockout punch heard all the way to Bambalapitiya from where it started, Mount Lavinia.

SPC was out-thought, out-passioned and most surprisingly out-run by a team who were all at sea for the first 10 minutes. Only to get aroused for the other 60. More specifically, the second half. STC had 2 times more run meters than their fancied opponents. A quite staggering game matrix.

The moment of the match:

79th minute when SPC are awarded a penalty 30 meters out, 10 in from touch with them needing 7 to win. They call a scrum in desperation– as they had yielded to a relentless STC line out, who had stolen 2 against the throw previously. Signaling a serious flaw and concern. SPC eventually scored a try at the death but missed the potential match-winning conversation.

Line outs in the modern game are an A1 priority. Unless they fix it, all their stunning backs will be in cold storage. That would be a crying shame. SPC faded so badly, their resolute and aggressive tackle technique disappeared with it.

Regardless, this ensures that SPC, one of my preseason favorites are now, vulnerable to almost anyone. Anyone. If STC who made 17 handling errors on a low rating can beat them by 1, what would a more clinical and higher rated side do? Unless they can have a significant turnaround, this could be a regressive formline and an alarming drift.

Kingswood at Nittawela could prove another banana skin. On which it could trigger a mass landslide. I guess we will soon find out. Saturday week.

STC, on the other hand, will be ready and waiting, the benefit of an extra 48 hours to prep for Royal. There will be some feeling in this and I can’t wait for it. 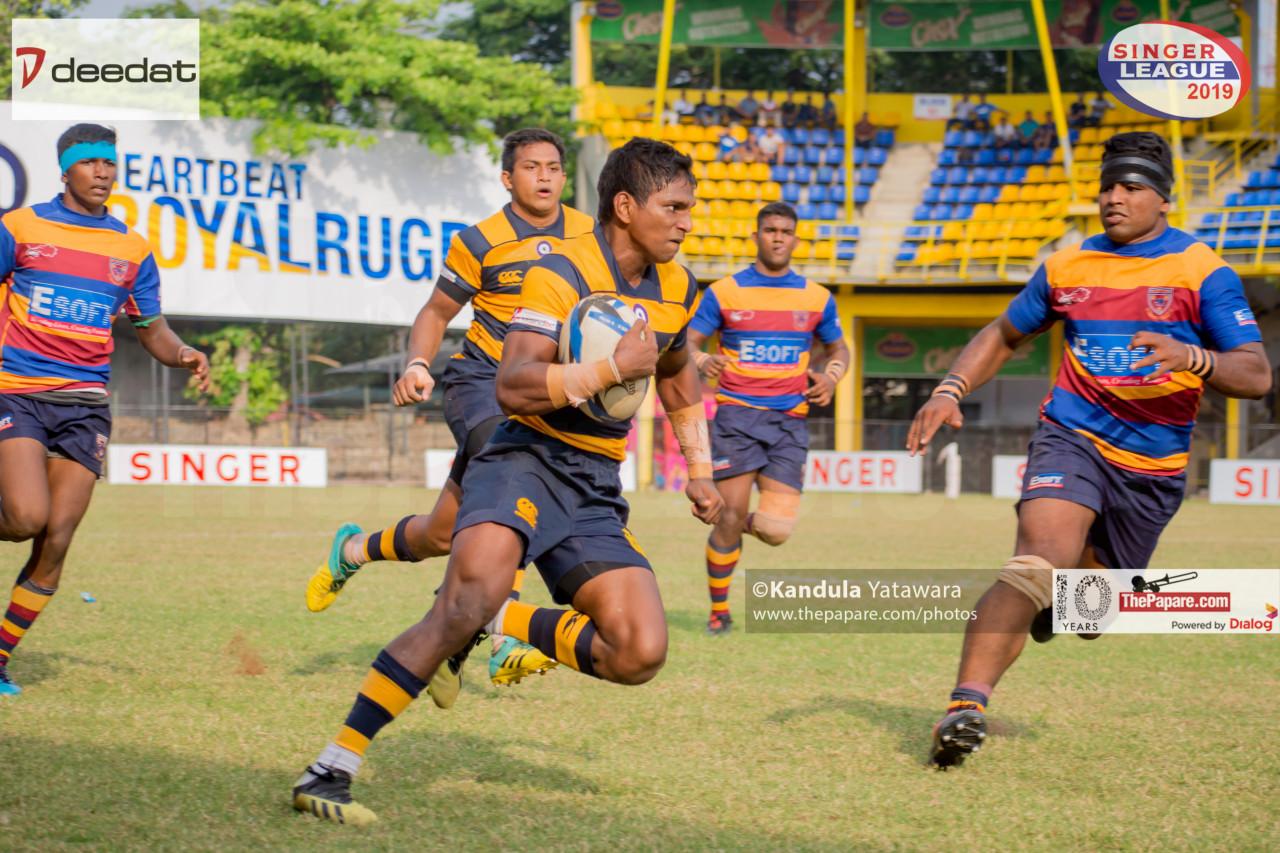 Defending champions and overwhelming “short-price” favorites in Royal, strolled out for the first time at home, at the “Park”– where their famous driving maul has buried many an opponent.

There was this eerie feeling of what awaited the new entrants.

Maliyadeva, on the back of two sterling years of progressive form, was very much the jolly roger-buccaneer who showed-up, to what was expected to be a straight forward formality. Bottommost seed playing the top dog in the big boys league. On paper, there was only going to be one winner. Well, that’s exactly what happened.

No surprises or adventurous upsets here.

It was a tough and pulverizing introduction to the top flight. Royal, playing like true odds favorites, walked and trampled their lesser opponent with disdain. They showed no mercy with slick hands, wonderful phase play and their patented, fishtailing- driving maul, to which Maliyadeva had no answer.

Jurassic Park was well and truly alive as the T-Rex swatted aside a newly adopted Triceratops. It was brave but that alone won’t ensure survival on this type of food chain.

They will want to put a line through this one and Royal, sharpen their teeth and get clinical for what will be a wobble-ish test next week for the Michael Gunarathne. If they get everything on point, STC no matter how bullish they are, will stand very little chance. 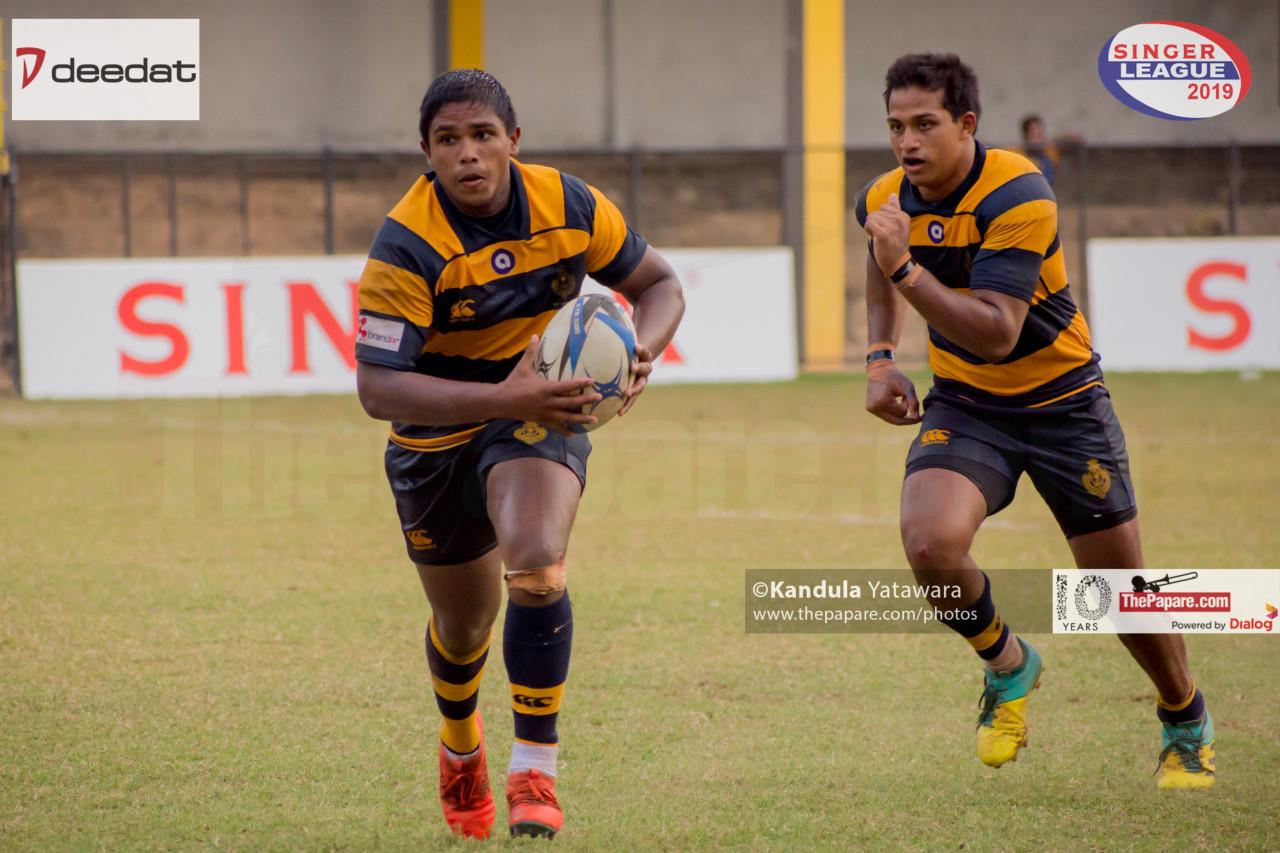 However, if they do get the wobbles, we might be in for an episode of Peaky Blinders. One which no one could afford to miss.

Play of the day:
St Peters first try where they played width and used the 5m to the touchline and release their backs. Way too many wheels for anyone and it looked for all money, 50+ was on the cards. A simple second man play off their first five and the pace out wide did the trick. Lethal.

Hero of the day:
Coach S Nawaz for teaching his cares and proving by actions what he almost a year ago described– as being a “transitional coach”, discussed with your truly. Actions, speak louder than words.

The verdict:
This weeks focus was all about coaching and what it means to coach. Given some tactics and questionable methods which have come under the spotlight, it’s a breath of fresh air to see how the Lavinians did the business. Rugby is a thinking man’s (or woman’s) game. Brains will trump brawn any day of the week, In this case, it was a Thursday.