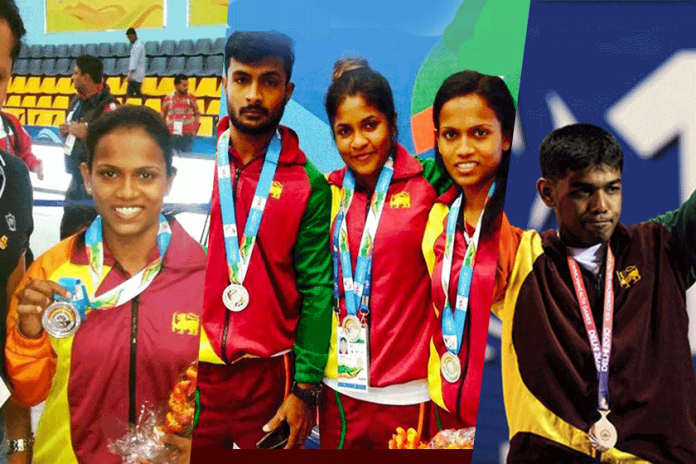 Sri Lanka had a good opening day where they collected a total of 21 medals of which 11 were from Swimming while Weightlifting produced the only Gold Medal to come from other than swimming.

Sudesh Peiris demolished his competition on his way to the gold medal in the men’s 62kg weight class and set a new South Asian Games record in the ‘Clean and Jerk.’

It was a battle between Dinusha and Molla Shabira of Bangladesh for the Silver Medal where Shabira lifted 63kg’s in Snatch and 80kg’s in Clean and Jerk.

Jayasooriya had to settle for the silver as he agonizingly failed to lift 131kgs in the clean and jerk which would have given him the gold medal.

In Wrestling Sri Lanka won two Silver Medals and three Bronze Medals while India won all the five Gold Medals which were on offer.

In the men’s 65kg Bronze medal match Sri Lanka’s W.M.C.Perera registered a comfortable 18-6 win over Afghanistan’s Zamir. In the first period Perera led 12-6 and kept his opponent scoreless while adding six more in the 2nd period.

The women’s competition was held in a round robin format as only four countries fielded their wrestlers.

Hemantha Kumara won the Bronze Medal in the Men’s 40km Individual Time Trial finishing with a timing of 55mins 25.441secs. He was just about a second more than 2nd placed Manjeet Singh who finished 54mins 01.183secs and Arvind Panwar won the gold with a timing of 52mins 28.800secs.

Sriyalatha Wickramasinghe missed out on a bronze medal in the Women’s 30km Individual Time Trial as she finished 40 secs adrift of 3rd placed Sabiha Bibi of Pakistan.