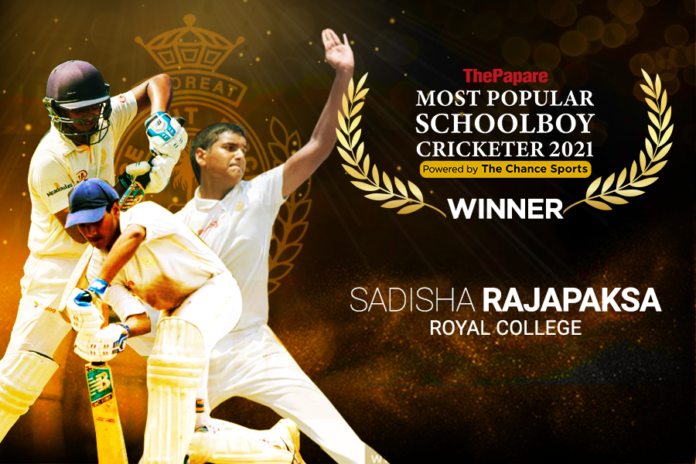 Sadisha Rajapaksha of Royal College won the inaugural ThePapare.com Most Popular Schoolboy Cricketer of the year award, which was powered by The Chance Sport.

The stylish Royalist top-order batsman recorded a whopping 1,034,559 votes to earn the glory of being crowned with this prestigious award. Rajapaksha had a tremendous season this year with the highest point being his involvement in a record partnership of 362 runs alongside Ahan Wickaramasinghe against Trinity College. He scored 152 runs not-out in the game, a feat which definitely ran across the island and stood as a testimony of his talent.

Behind him was the all-rounder Thrimalsha Silva, who is from St. Anne’s College, Kurunegala, as the runner-up. Thrimalsha earned 631,804 votes for his brilliance in the sport for his school.

Isipathana College skipper, Thevindu Dickwella, was the second runner-up of the competition with 275,343 votes.

The competition began with 108 school cricketers representing 36 schools that took part in the Under 19 Division I Tournament of 2020/21. Organized by Sri Lanka’s No.1 sports hub ThePapare.com, the event was powered by the renowned sports goods store in Colombo, The Chance Sports.

The first phase of the competition ran from 13th – 23rd May 2021 via online voting on ThePapare.com website after which the top 36 players advanced to phase two. The second phase was based on SMS voting and was conducted from 29th of May until 11.59pm on the 18th of June 2021.

ThePapare.com was delighted to conduct such an exciting competition and wish to thank the participants and voters for making it such a rollicking success.

Video – Brothers in action | Duck it