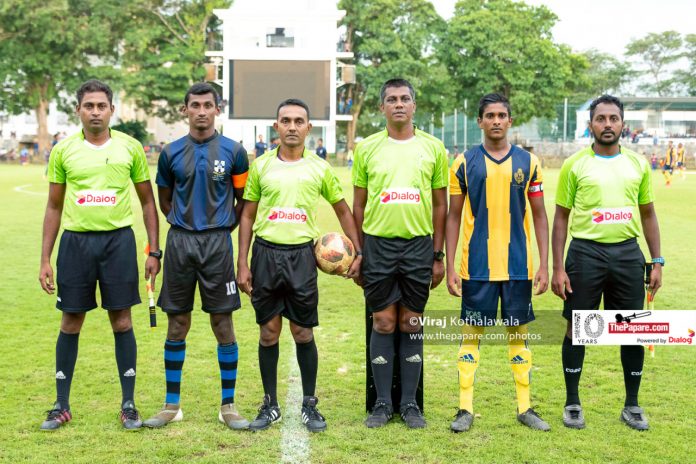 Referee Mohamed Riyasee played spoilsport in the 26th Royal-Thomian Football Encounter which was abandoned at half time with the scores reading 1-1 at the Race Course Stadium.

Attacking from the start, S. Thomas’ were rewarded with a penalty in the 2nd minute after Senal De Alwis was fouled inside the box following a sweeping counter attack from the right. Skipper Shevaan Ebenezer stepped up to bury it to give the hosts the lead.

Most of the Thomian attacks came from the right where the likes of Samuel Aharan, Senal De Alwis and Shevaan Ebenezer wreaked havoc. However, heavy touches in and around the box denied them of goal scoring opportunities.

Manidu Rabel had a golden chance to double the lead when a cross found him unmarked at the far post but his header was directed straight at Mishraf Asad. Royal had no reply to the Thomian attacks in the opening 20 minutes which forced the visitors into making an early substitution.

Royal had the majority of possession but were unable to make use of it against an organized and disciplined Thomian defense. Sri Lanka U19 cap and Royal captain Shishan Prabudda took a couple of free-kicks which barely tested the goalkeeper.

Royal were given a lifeline in the 30th minute when Ebenezer was sent off for a dubious 2nd yellow card, following a shoulder to shoulder battle with a Royal player.

Referee Riyasee then continued to play the next 10 minutes in barely visible conditions putting the wellbeing of the players in danger, adding to his bad decisions throughout the match. Royal with a one man advantage attacked in search of an equalizer and nearly had it, only to be denied by the post.

Thomian goalkeeper Dharmendra Shivadharshan on numerous occasions spoke to the referee of the poor visibility but the official continued play. Unsighted by a cross soon after, Shivadharshan gave the opening Royal needed to equalize just minutes before half time.

Half time was called with rain pelting down hard and by the time it was ready for the start of the 2nd half the ground was waterlogged and the visibility was even poorer as the officials decided to abandon the match. The two schools will decide whether they will play the match on a later date.