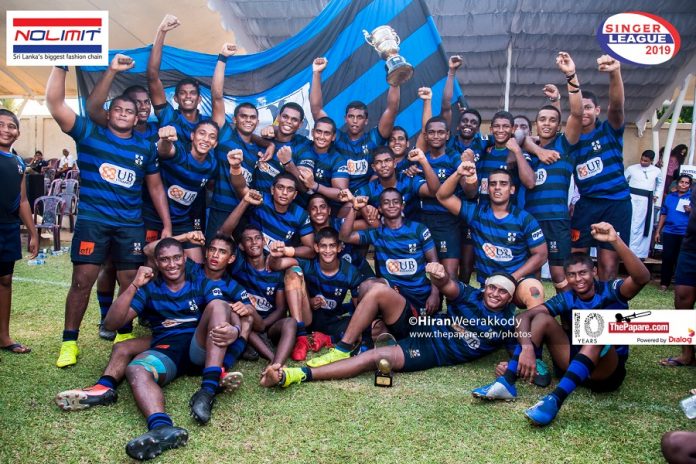 It was a nail-biting encounter between S. Thomas’ and St. Peter’s to open the Singer Schools Rugby League 2019, with the Archibald Perera Trophy up for grabs. Despite scoring 14 points in the first 6 minutes of the game, a late surge by the Thomians saw the tables turn as the final scores read 20 – 19 in favour of S. Thomas’ helping them keep the trophy in Mount Lavinia.

Kick-starting the Singer School’s Rugby League 2019, the Thomians looked promising after recollecting the ball from the kickoff – but, one loose ball was all it took for the lethal Peterite backs to make them pay, as two quick tries in the 1st and 6th minutes saw St. Peter’s flying high.

Drop balls seemed inevitable for Harith Senanayake and his troops, as Sandesh De Mel easily scored the first try under the post, followed by a cracking touchdown in the corner by Raveen Fernando, who stepped his way over to the whitewash. Thenuka Nanayakkara made no mistake with the conversions, putting his team 14 points up early in the game.

But that was it for the Bamba Brigade, in terms of possession and attack. The home team starved the visitors of the ball as they kept dropping it at the same time. However, not capitalizing on the given opportunities, Bilal Hilmy and his lads had to settle for just the 14 points at lemons.

The second half action got underway with St. Peter’s reduced to 14 men, as Julian Charles was sent off for punching a player, 2 minutes from the restart. However, something that coach Shamly Nawaz instructed his boys at half-time seemed to work like magic as the Thomians looked a whole different side in the final 35 minutes.

Drawing first blood for the home team, Jaan De Zoysa slotted in a three-pointer, while Lashandra De Silva went over the try line 10 minutes later, not letting the numerical advantage go to waste.

Maybe it was the curse of the sides, as this time, the Peterites kept dropping the ball. But, unlike their story in the 1st half, S. Thomas’ made the best from the opportunities thrown at them. In the 59th minute, Sadak Ishak scored the try that put S. Thomas’ in the lead, after he picked up a dropped ball and sprinted straight through the broken play ending up under the post. Zoysa added 5 more points, after a successful conversion and a three-pointer that followed 5 minutes later.

With a minute remaining and a deficit of 6 points, St. Peter’s had to score and convert if they wanted a win. The try came through Julian Charles who barged through the defense a little beside the posts – but, unfortunately, the conversion went astray!

As the kick drifted away, Referee Ishanka Abeykoone blew the final whistle confirming a Thomian victory.