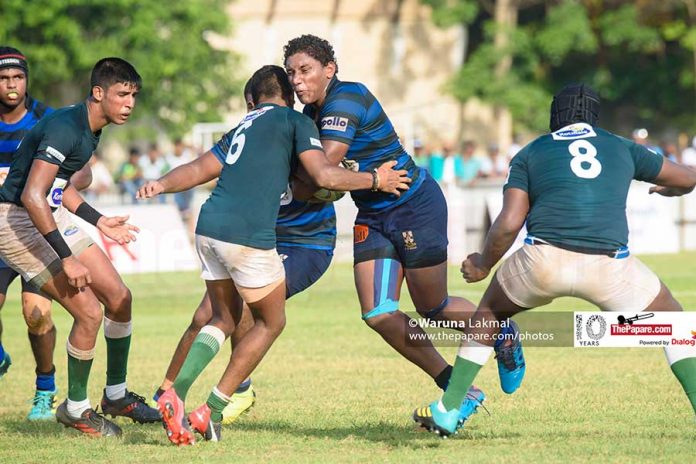 Manilka Ruberu of Isipathana College made a heroic effort to save his team from defeat in the very last minute as he bisected the uprights to draw the game against S. Thomas’ College 12 all. The final moment of Ruberu was a carbon copy performance from his effort against Trinity College last year, which also ended 12 all.

Basula Weerasinghe kicked off proceedings for the Thomians in the absence of regular fly half Jaan De Zoysa. The physically larger Thomian forwards were very dominating in the Isipathana territory and after a clean line out, they drove themselves closer to the line before the big prop forward Shenouk Perera scored closer to the left post in the 7th minute. Basula Weerasinghe used the wind to his advantage and cleared the conversion with ease.(STC 07 – IC 00)

The Thomians were able to keep the fast running Isipathana backline quiet for much of the first half. At one point the Green Machine were firing all cylinders as the ball kept drifting towards winger Ramitha De Silva, but he was brilliantly tackled by his opposite number. The Thomians were playing a very defensive game in the first half and after being caught napping, Manilka Ruberu made a long cut out pass to Ramitha De Silva but he only managed to cough it up just 10m short of the try line. However, they managed to get some points on the board with an easy penalty off the boot of Ruberu on the brink of halftime.

Both teams came after very narrow defeats from round 1 and needed to get their game up in the second half in order to go up the ranks in the points table. The Greens were mostly occupied in the Thomian half after the restart and after being awarded a penalty, Ruberu made a cardinal error by kicking over the try line and possession was turned over. However, the visitors seemed more attacking in the second half and got the better off the Thomian forwards. Three clearance kicks later, Manilka Ruberu pointed towards the goal in the 48th minute this time and cleared with ease. (STC 07 – IC 06)

A terrible restart and the Thomians were showing signs of panicking with a one-point gap. Things were not going according to plan and Isipathana were awarded another penalty which was bisected with ease by Ruberu in the 53rd minute. (STC 07 – IC 09)

Isipathana gained the lead for the very first time and their fullback made an excellent try saving tackle a few minutes later. Rehan Olugala dashed 40m and was brought down meters close to the try line. However, in the 64th minute, the Thomians displayed some incredible Fiji 7s style ball handling skills which was not seen throughout the game. After many quick offloads and fancy backhand passes especially by the forwards, Sakith Perera the little scrum half sniped his way untouched around from the left corner and scored beside the post to gain the lead for STC. Basula missed the conversion against the wind and it was a do or die situation for both teams as full time loomed. (STC 12 – IC 09)

The Thomians were playing extremely defensive until the final minutes of the game but a penalty in the breakdown gave the Green Machine a chance to even out the game. For the 4th time in the game, Manilka Ruberu who had 100% goal kicking accuracy, pointed towards the posts and made the decisive penalty kick which drew the game. Referee Rohan Fernando blew the long whistle to the relief of the Green Machine and the Thomians were unfortunate not to secure a W against Isipathana after 10 long years.


Man of the match – Sakith Perera