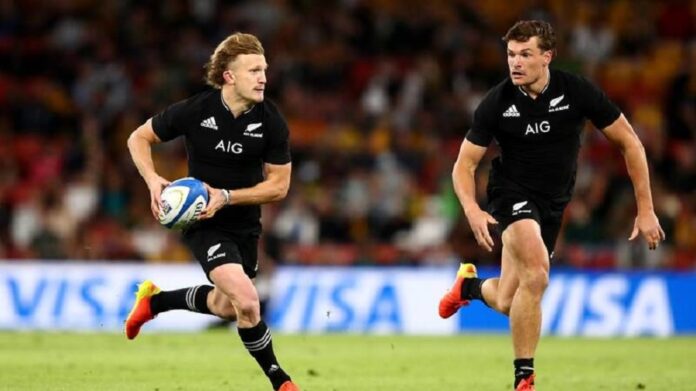 The All Blacks have taken another huge stride towards securing the 2021 Rugby Championship with a 36-13 victory over Argentina in Brisbane on Saturday.

The men in black exploded out of the gates to establish an early advantage the Pumas were never able to sniff, running in five tries to one to record their ninth consecutive win, including an all-important bonus point to go 10 points clear of South Africa.

They now need just one more bonus point from their final two matches of the competition against the Springboks to secure the title.

The win should also be enough to lift the All Blacks back to the top of World Rugby’s international test rankings.

Resurgent No. 8 Hoskins Sotutu was immense through the opening half, playing a hand in all three All Blacks tries, fellow forward Ethan Blackadder was relentless across the park, and Damian McKenzie played a measured hand at first-five.

Coach Ian Foster may not be too pleased with an ill-disciplined final quarter but he’ll surely be smiling, as his overhauled side got the job done while allowing a host of frontline players a chance to rest up before squaring off with the world champions in Townsville next week.

The All Blacks needed just five minutes to open the scoring, with Patrick Tuiplulotu on hand to bulldoze his way over the line, capitalising on a clear break from the ruck from Sotutu.

After two tries had been ruled out due to forward passes – one to Rieko Ioane and the other to Will Jordan – TJ Perenara burrowed across off the back of a sharp wide ball from the base of the scrum by Sotutu.

The Blues No.8 then latched on to a loose ball and shifted a pass to an unmarked Tupou Vaa’i, who strolled in untouched to help the All Blacks to a handy 24-3 advantage at halftime.

The Pumas came into the second half desperately needing to be the next team to dot down but curiously chose to take a shot at goal on an attacking raid rather than press for a try.

The All Blacks promptly embarked on another raid on the Argentinian try line, with Jordan’s deft tap-on pass opening a lane for Samisoni Taukei’aho to barge into the corner.

Finally the Pumas were able to break their 200-minute-plus try scoring drought against New Zealand, as wing Emiliano Boffelli reeled in a Santiago Carreras crossfield kick and finished expertly under duress to give his team a jolt of confidence.

While the All Blacks rang the changes, the Pumas rode that wave into an impressive closing quarter during which they dominated both territory and possession – cashing in on a string of penalties from their ill-disciplined opponents.

But for all their heart, Argentina were unable to add to their tally, as Scott Barrett’s silky offload in the tackle put Vaa’i in under the crossbar for his second try to rub some late salt in the Pumas’ wounds.