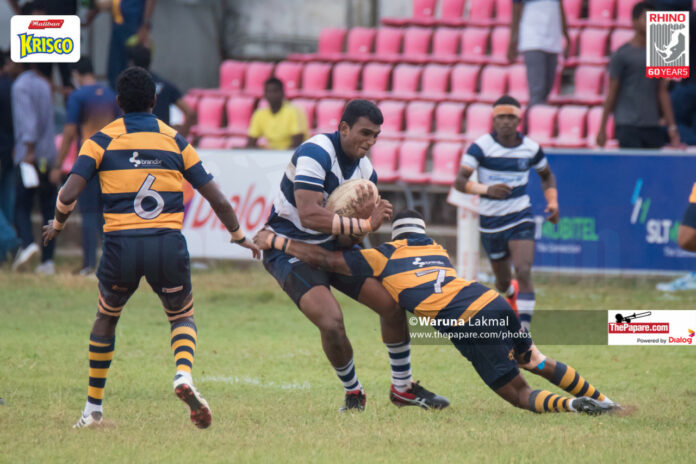 The defending League champions, Royal College broke the unbeaten run of St. Joseph’s College with a thrilling win by 17 (3T, 1C) points to 3 (1P) in their Dialog Schools Rugby League 2022 encounter played at the Havelock Grounds on Friday.

The score line does not do justice to what both teams put out on the field as it was a defensive masterclass from the Royalists while the Josephians fell short in the final quarter of the game. With this win, Royal College top Group 1A and advance to the Super Round of the competition.

The most anticipated game of Week five commenced with a good crowd presence from both schools. St. Joseph’s College opened the scores with a penalty from their place-kicker Subhash Dilhara to take the early lead. (SJC 03 – 00 RC)

After Sachinthana Waidyarathna was sent off to the naughty chair, Royal College forwards pounced on the 14-man Joes to score the first try of the game through their lock forward Rahil Wijesekara.

It all started from a line out throw and they pushed closer to the try line using their trademark rolling maul. After keeping the ball in close quarters through their forwards, Wijesekara eventually carried the ball over. Nabeel Yahiya added the extra points for the visitors. (SJC 03 – 07 RC)

The Josephians tried their best to penetrate the Royal defensive line through their skipper – center Teran Karunanayake, fly-half Subash Dilhara and full back Isuru Kanchana but the Royal defense held strong.

The Josephians earned a couple of kickable penalties over the course of the game, but they got only one through as Dilhara failed to bisect the uprights from right in front of the posts.

Just before the half-time whistle, the Josephians had the one-man advantage when Royal hooker Danuja Samanarathne was sinbinned for a high tackle. Despite the advantage, they failed to make it count.

Throughout the second half for almost the entirety of the 35 minutes of play, Joes had territory and possession but simply could not find a way past a determined Royal College defense.

In the 49th minute of the game, Joes skipper Karunanayake had a head-on-head clash with Yovinda Athulgala which proved to be vital for the hosts. Athulgala was given a yellow card by referee Ishanka Abeykoon for a reckless, late charge despite the seemingly popular opinion being that it should have been a red.

Royal also managed to negate the threat of the big Josephian Number 8 Naveen Marasinghe. They kept going for his ankles and thereby prevented him from making any marauding runs through the defensive line.

In the dying moments of game, Joes were down to 14 once again when Nithick Rodrigo was shown yellow for a high tackle. That allowed Royal to get on the offensive and they managed to take the game away with a try in the 65th minute. Joes were hesitant to engage in the rolling maul and when they did it was too late as hooker Danuja Samanarathne barged over the whitewash to put the game to bed. (SJC 03 – 12 RC)

To put icing on the cake, Royal scrum half Hansaka Higgoda found space in the middle and darted all the way to try line in the 68th minute as the bruised St. Joseph’s outfit had no answers when the Royalists went on the offensive.