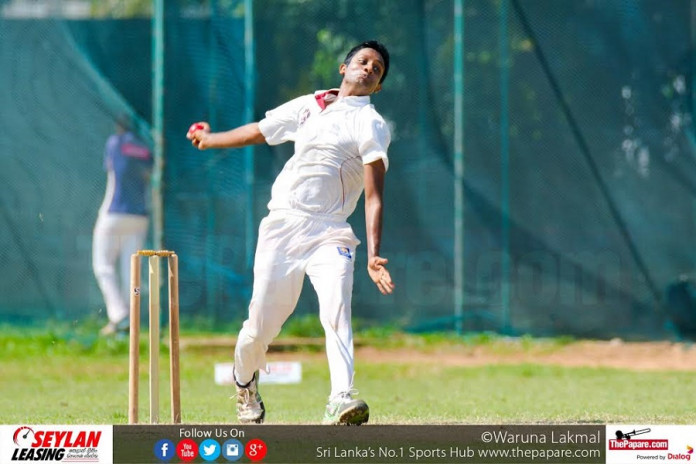 The return of Pasindu Sooriyabandara inspired Royal College to gain first innings points over Isipathana College while hosts Nalanda College claimed first innings honours in their traditional fixture against De Mazenod College. Both games were affected by the evening thundershowers on Day 2.

Winning the toss, Isipathana elected to field first. The hero from this year’s big match Pasindu Sooriyabandara returned after a shoulder injury to play his first game of the season. His solid 79 braced an innings which amassed 310/9 before declaration. Rithmika Nimesh, Niranjan Wanniyarachchi and Lahiru Dilshan bagged 2 wickets each. Isipathana, continuing from their overnight score of 48/2, resisted with a resolute 277 which was spearheaded by Sanjula Bandara’s 66. For Royal, Himesh Ramanayake continued his form, capturing 5 for 52.

Torrential rains prevented an essay as the match saw an early call off.

Suhanga Wijewardana (40) and Kasun Sandaruwan (40) fused a first innings win for Nalanda against rivals De Mazenod College, Kandana. Batting first, Nalanda made 229 before being bowled out in 65 overs. Mithila Geeth took 3 for 26 for the visitors.

In reply, De Mazenod was bowled out for 131. Umeksha Dilshan’s terrific spell yielded 4 for 19. In the second essay, Malinga Amarasinghe throttled Nalanda with his 66 while they remained on 133/4 at close.