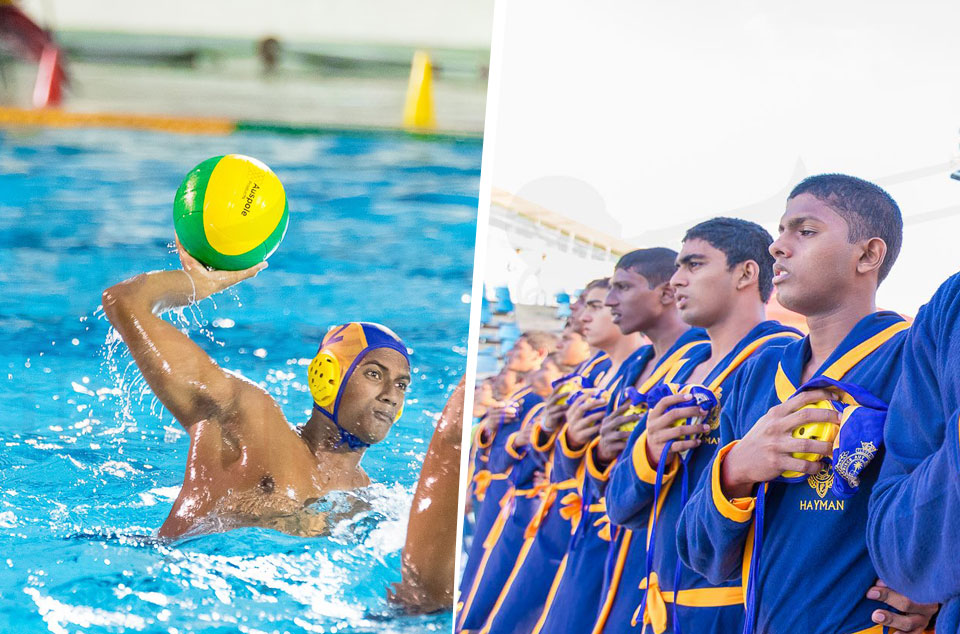 Royal College broke the 7-year curse when they defeated the spirited S. Thomas’ College outfit 9-7 to take the 1st leg honours at the Dr R. L. Hayman Annual Water polo encounter that was worked off at the Sugathadasa swimming pool complex.

This was the first time in seven years that the school on Reid Avenue were fortunate of celebrating the 1st leg honours whereas their opposition, S. Thomas’ College have been the dominant side in the last five years.

The two quick goals early into the 1st quarter from Isiwaruna De Silva was the difference between the two sides with the eager Royalists drawing first blood. The big built Akindu Handunpathirana completed the perfect start for Royal, sneaking in the third in the 4th minute.

The disjointed Thomians took their time to settle in and Randhev David drew first blood mid-way in the 1st quarter. The intensity from the start continued while both teams scored a goal each just before the end of the half off the efforts of the experienced Savinda Dissanayake of Royal and Shannon Ebenezer of S. Thomas’ respectively.

Going into the second half, Royal had with themselves a two-goal lead but the Thomians enjoyed major honours in the second quarter. Ebenezer and Manula Wickremaratne added two goals for S. Thomas’ while Savinda Dissanayake got his second and Royal’s 5th just before halftime. (5-4)

The halftime team talk saw S. Thomas’ shifting tactics and two successive goals from Manula Wickremaratne and Shevaan Ebenezer gave them the lead for the first time in the game.

However, the lead was short lived with Savinda Dissanayake scoring a double within two minutes to win back the lead. (7-6)

The Thomians controlled the majority of the possession, making Royal toil hard in defense but didn’t have the x-factor to convert to goals. Shevaan Ebenezer later equalized early in the 4th quarter bringing momentum back to the lads from Mount Lavinia, but the defensive effort saw Royal through. Later a goal from Dulvin Dahanayake won back the lead.

With seconds to go for the full-time whistle, Royal was gifted a scoring opportunity off a foul allowing Isiwaruna De Silva to have the last say as the blue and gold finished 9-7 in the 1st leg.

Royal’s win in this 27th Hayman trophy opener will be a treasured victory but in a week’s time will come the decisive second leg. The Royal College trophy cabinet saw the likes of the Hayman silverware last in 2012 and there awaits an opportunity for Dulanjana Fernando’s side to rewrite history.

The Thomians should draw inspiration from the 2012 Royal College that won the prized silverware if they need to make a turnaround in the second leg. In 2012, the Shan Lakshitha led Royal side came from behind after losing the 1st leg to win the 2nd and the Hayman.

The second leg of the Hayman trophy comes alive on the 6th of October 2018.