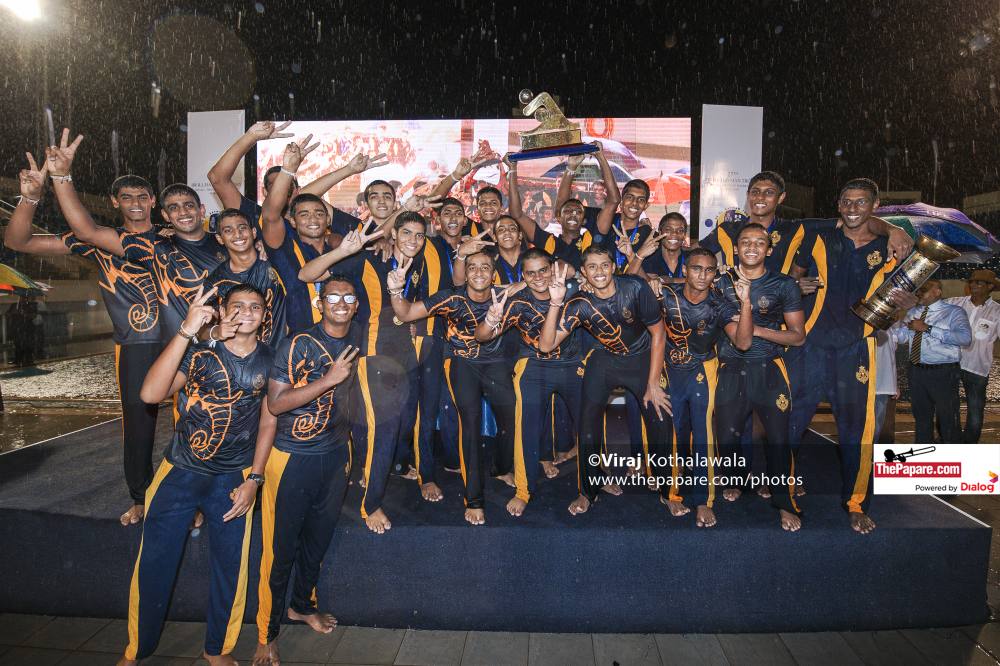 Akindu Handunpathirana’s late goal that came 25 seconds to the full-time whistle saw the stormy waters of  Sugathadasa  erupt in euphoria as the Blue and Gold, Royal College Colombo broke the 5-year hoo-doo to clinch victory in the 27th Dr R. L. Hayman encounter on a 16-15 aggregate.

The Sugathadasa swimming pool came alive despite the heavy downpour to see-off the final exchanges in the 27th edition evening.  Building up to the second leg there were some controversies which were nullified by both schools showing the great Royal-Thomian spirit.

With both institutions acknowledging the error and determined to get the better of the other, the day was set for some exciting end-to-end water polo action. Royal had a 2-goal lead cushion but the Thomians looked ferocious.

Royal started off the second leg in the similar fashion to the first. Shamod Edirisinghe’s quick reflexes saw the Royalists leading 2-0 four minutes into the second leg.

For S. Thomas’ it was Anaam Sourjah and Shevaan Ebenezer who took the scoring honours but a long range shot from Savinda Dissanayake of Royal, had the boys from Reid Avenue taking the 1st quarter 3-2.

Then came the Thomian outburst where the Blue and Blacks took control of the game. The hero from 2016, Dilith Kumrasinghe gave it his all to stop the Royalists from scoring, but it was Ebenezer who scripted the comeback.

Thomian Captain Sanaka Molligoda opened the 2nd quarter with the equalizer that his counterpart Dulanjan Fernando shot down a few minutes later.

Five minutes into the second quarter, Thomian Shannon Ebenezer slotted the important score that saw both teams go in for the half-time break with 4 goals a-piece.

The positioning from S Thomas was on point and the Royalists had to toil hard in the middle of the pool to counter the Thomian wings.

The hero from the last year, Manula Wikramaratne was the person the team opted to rely upon in the 3rd quarter. Two goals from the aggressive Wikramaratne saw the Hayman drawn at aggregate.

However, Shannon Ebenezer’s 5th-minute goal sweetened it for the Thomians as they were finally put on the driving seat (7-4STC)

The lead in the dual stood for all of 2 minutes until the experienced Royal Isiwaruna De Silva’s clever lob found the goal drifting over Dilith Kumarasinghe (7(14)-5(14)).

Ebenezer furthered the Thomian winning cause scoring early in the 4th quarter (8(15)/5(14)).

With two minutes to the final whistle, Royal finally got themselves together and Akther Jaffer sparked a goal, defying the defensive effort.

Knowing a draw would result in S. Thomas’ retaining the silverware, Royal’s match-winner went through to score in the 5th minute with his support contingent going berserk only to find out that the goal was disallowed.

The play was halted to sort out the confusion and then, with 25 seconds to go, the golden goal came for the Royalists. Akindu Handunpathirane’s touch off a good pass which saw the ball landing inside passing the hands of Dilith Kumarasinghe.

It was Handunpathirana who started the 1st leg and it was the young 17-year-old whose late goal saw Royal bringing home the Hayman after a long lapse of 5 years.

S. Thomas’ won the 2nd leg 8-7 but it was not adequate for a change of result. Royal College secured a breathtaking 16-15 win on aggregate as the prized silverware was set to head to Reid Avenue after 2012.

The Thomians who showed tremendous heart, found it insufficient to turn things around. Dilith Kumarasinghe’s goalkeeping efforts were exceptional and were the reason why the Royalists had to toil for the victory.

It will be a Hayman encounter for the ages and this game will go down in history as one of the greatest that the series has ever witnessed.