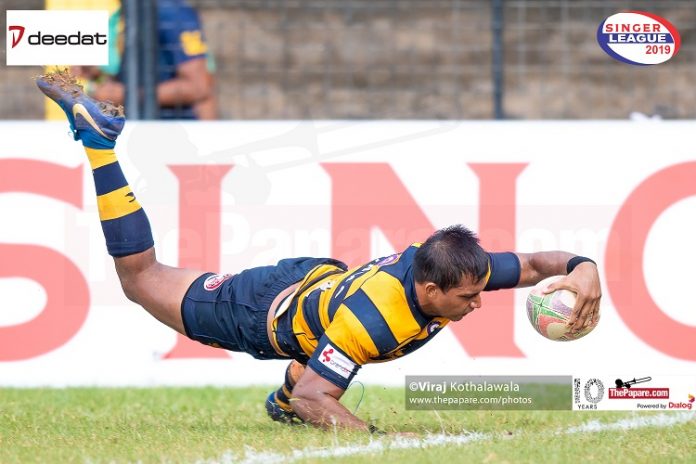 Royal College Colombo got their second straight win in the 2nd round of Singer Schools Rugby League 2019 by beating Science College Mt.Lavinia. Royal scored at the brink of half time after some resilient defending by Science to take a 19-13 lead in the 1st half. The Reid Avenue boys took full control in the second half as they managed to score 3 more tries to finish off the game 41-20.

Royal managed to open scoring in the 5th minute of the game as skipper Thulaib Hassan broke through the Science defense with ease. Dulan Gunawardena made no mistake with the conversion to make the score 0-7.

Science did not back down as Prince Ranasing managed to counterattack a clearance kick made by Royal and gave a wonderful off load to Navindu Silva who went on to score the first try under the posts. Kavindu Cooray added the extras to level the score 7-7.

Science College dominated the rest of the second half as Kavindu Cooray managed to slot through 2 penalties as Science unexpectedly extended their lead to 07-13. Towards the end of the second half Royal managed to regain possession and went on to score as Achitha Radeeshan touched down for their second try to close the gap 12-17. The Royal Tuskers scored another try right at the brink of half time to take the lead, after keeping possession with them for more than 15 phases when Kevin Samarasekara snuck through the resilient Science defense off the ruck to score under the post. Dulan yet again made no mistake with the conversion as Royal took a 19-13 lead going into the break.

After a crucial first half comeback, Royal looked calm and patient in their attack in the second half, as they managed to force Science to make back to back infringements early into the half. Dulan Gunawardena managed to slot through a penalty to take his team up to 22-13. It was all one-way traffic in the second  half as Science looked lost in defense and clueless when Royal was attacking. The Royal Forwards looked dominant as usual with the rolling maul and the big prop forward Radesh Wijerathne managed to score under the posts off a well executed forwards play to extend Royal’s lead. (29-13)

The player of the match for today’s game, Kevin Samarasekara joined his backline to score the 5th try for the Royalists as he barged through 3 defenders to score another one under the posts. Dulan Gunawardena slotted through the conversion with no problem as Royal moved up to 36-13.

Science College came back to life in the latter part of the half, as their forwards took control of the game and managed to bring the ball meters away from the try line. The replacement prop forward for Science, Binusha Fernando joined the ruck right when a gap opened in the Royal defense. He took the opportunity to pick and drive through with his powerful leg drive to score the hosts’ 2nd try.

It was a little too late for a comeback, but Science College showed how resilient they are. Kavindu Cooray with 100 percent kicking accuracy made no mistake again by adding the extras taking the score to 36-20. As the 70-minute mark hit on the clock Royalists created a mouth-watering attack where their forwards and the backline clicked together for the first time in the game. The forwards made the hard yards and took them closer to the try line. Nipun Yasojana the scrumhalf for Royal was quick to spot the space out wide as he sent quick ball out to his backs where Avin George found himself in the corner flag with no defenders ahead of him. It was an easy try for the Royal wing to finish off the game 41-20.