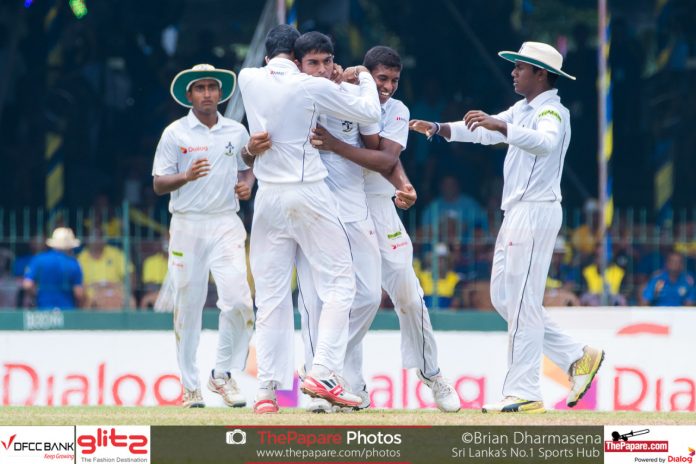 The 139th Royal-Thomian cricket encounter is heading for a draw at the end of rain-interrupted day two on Saturday at SSC grounds, Colombo.

Throughout day two, only 148 runs were scored in 66 overs as more than 30 overs were lost due to rain and bad light. The cricket was as dreary as the weather, with both teams opting to play a safe and slow the game. A result is unlikely unless a dramatic turnaround of events take place on the third and final day.

The second day’s play commenced with S. Thomas in the box seat with Royal on 33 for 3. But their best batsmen Pasindu Sooriyabandara and Kavindu Madarasinghe were at the crease and they constructed a solid 75-run partnership for the fourth wicket to resurrect the Royal innings.

Sooriyabandara was given a reprieve by wicket-keeper batsman Sithara Hapuhinna off Shanon Fernando in the 19th over of the day but a loss of concentration a couple of overs later, brought the downfall of the Royal captain as he edged behind to become Kalana Perera’s fourth victim.

Sooriyabandara stroked 7 elegant fours and a massive six during his 90-ball 46. With ‘Soori’ falling at 96, S. Thomas’ sensed an opportunity to restrict the brittle, inexperienced Royal middle and lower order.

Madarasinghe’s patient, fighting knock of 37 off 137 deliveries ended in the 48th over of the innings when the left-hander pushed a Pavith Rathnayake delivery straight to short mid-wicket.

Skipper Dellon Peiris brought himself on as the 7th bowler and trapped Thevindu Senaratne in his fourth over to further dismantle the Royal innings.

Peiris followed up with the wickets of Lahiru Madusanka and Kavindu Pathirathne who both fell inside three deliveries while attempting senseless strokes – Madusanka holed out in the deep and Pathirathne got stumped as S. Thomas’ continued to peg back the Royalists.

Kalana Perera bounced out Themal Bandara to complete his second five-wicket haul in the Royal-Thomian series as rain halted play around 2.00pm with the Royal score on 151 for 9.

After a brief shower, the match recommenced at 3.45pm. The last pair, Manula Perera and Dimal Wijesekara battled hard against the short-delivery barrage of Kalana Perera and got past the Thomian first innings score adding 27 runs in 79 balls.

The Thomians ran out of options at one time prompting Kalana to even bowl left-arm spin.  Skipper Peiris ended Wijesekara’s crucial 63-ball stay as Royal took a slight 12-run first innings lead when they were bowled out for 178 in 75 overs.

S. Thomas’ started off their innings cautiously, scoring only 3 runs in 6 overs before umpires brought a premature end to the day’s play due to bad light at around 5.00pm.

The Thomians will be hoping to bat normally for a session and then look to set a target and spice up the game while the Royalists will be hoping to take wickets at regular intervals in order to push for a result on a riveting day three tomorrow (11th March).