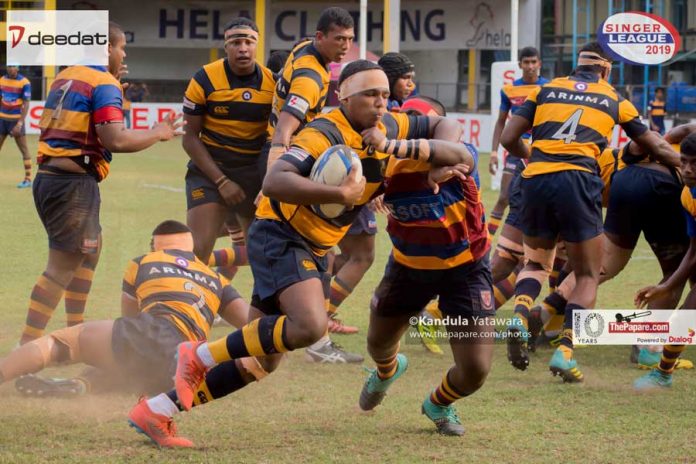 At half-time, Royal were leading 24-03 and it all started with the line-out clicking for the Royalists earlier in the game through Faadhil Adahan. It then developed with decisive defense and it cashed in on brilliance with 10 tries.

Early on, it was all about Maliyadeva, as they toiled to bust through a formidable and crafty Royal defense. The home team continuously managed to repel the visitors for a solid 10 minutes, and they were anything but predictable on attack, such was the eagerness and strength of the defending champions, that they did not give an inch and refused to buckle.

But the moment Royal got their hands on possession, which was the eventual story, they displayed their attacking prowess, a long cut out pass from Kalindu Nandila inside their own half sent captain Thulaib Hassen over for an unconverted crossing for the opening try. (RC 05-00 MC)

The next celebration followed soon after as a fragile handling error turned the ball over for Royal as the loose ball found Nandila and he sent Dulan Gunawardana into space near the touchline on his left. And the winger stepped inside, beating a couple of defenders, and sped past the covering full back and raced some 40 meters straight down to the goal posts. Dulan Gunawardana who had a brilliant season last year with his kicking added the extras. (RC 12-00 MC)

Dulan Gunawardana scored on either sides of a penalty from the Maliyadeva captain Kausalya Gunaweera after Royal had been penalized. Gunawardena who had a brilliant game received a lovely inside ball from his fly-half Lehan Gunarathne going untouched for his first try under the post as the next came on the brink of half time, joining an attacking move, running through broken play untouched, stepping past 4 defenders over the whitewash. (RC 24-03 MC)

Gunawardena made no mistakes to add the extras for the 24-03 as they headed to the dressing rooms.

Royal picked up where they left off and eventually had their first try in the 45th minute courtesy of a signature rolling maul. Faadhil Adahan who collected cleanly set it up for his forwards as hooker Rajindu Jayasuriya went over for his first try of the game. (RC 29-03 MC)

Minutes later Maliyadeva were finally rewarded with a penalty for holding on, and then followed what became Maliyadeva’s theme of the match, opting to go for posts. Kausalya Gunaweera made no mistakes to add the three points. (RC 29-06 MC)

Soon afterwards Rajindu Jayasuriya got his second with the same signature carbon copy rolling maul. After only getting two of his kicks on target from Dulan Gunawardana, Lehan Gunarathne was given the kicking duties which he put into maximum use (RC 34-06 MC).

Kausalya Gunaweera was yellow carded for a high tackle and played no part in the game again and hence the rest of the four tries came in quick succession, the Maliyadeva lads were getting themselves exhausted with all the defending and Royal made full use of this.

Another well set rolling maul gave Tuan Jayah, the hooker, a well-deserved first try of the last four with the nippy scrum-half Nipuna Yasojana robbing himself two tries from the forwards towards the close of play followed up by speedster Migara Mihisanka scoring the magnificent other.

Both Yasodana tries came from Royal running the ball from their own half, Kalindu Nandila was in the thick of things as Yasojana robbed the forwards from two well deserved tries from the back of the ruck. Mihisanka however made a telling break snapping through the Maliyadeva defense in the corner rounding off under the posts to secure Royal with a dominant victory in their opening stint.

The game ended with a commanding warning given out to the rest of the schools that Royal are here and here to defend their title. Kevin Samaranayake had an excellent game at flanker and surely the likes of Maleesha Madumewan’s absence from last year wasn’t felt, a highly efficient work rate making one on tackles and line breaks earned himself CLEAR men’s Man of the match.