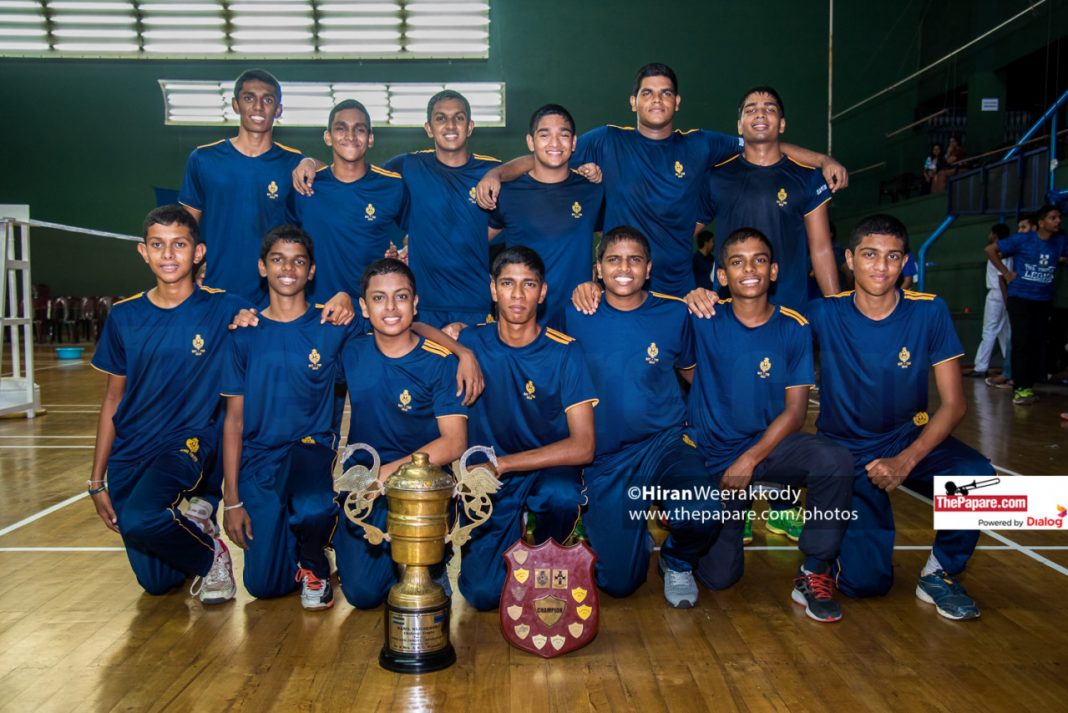 ThePapare.com | Hiran Weerakkody | 08/09/2018 Editing and re-using images without permission of ThePapare.com will be considered an intended…

Royal College were favorites to win with 6 championships under their belt already, and captain Nilesh Wijesekara and his team made sure to keep the title where it belonged for another trip around the sun.

The annual encounter is a traditional two-age group competition – Under 17 and Under 20. This year’s captains, Nilesh Wijesekara for Royal, Ravindu Peiris and Dharaka Peiris for S. Thomas’ muscled strong fronts for the battle, only to see Royal come out stronger.

Starting off proceedings in a Royal flush, the Under 17 team event was carried away by the boys from Reid Avenue with a straight 3-0 victory in the singles matches. Thomian Siaasara Dhevasirinayana was first up on the block for the first singles and was beaten in close 21/12, 21/16 sets by Royal’s Dumindu Abeywickrama.

Ashel Peter (STC) put up a valiant effort in the second singles against Sadeep Kaluarachchi (RC), only to face defeat 22/20, 21/10. It was Kalana Kannagara (RC) who drove the Royalists home with a three-set victory over Thanushika Gunawardena (STC), 17/21, 21/18, 21/14 to claim the overall Under 17 Championship.

The Under 19 event was more of a close call, with the Thomians leading the parade at the end of the first three singles by two wins to one. Co-captain Dharaka Peiris (STC) defeated Nethula Liyanage (RC) 17/21, 21/19,21/12 in a smashing opening game.

The lone standing Lions for Sri Lankan Badminton, Sachin Dias and Buwaneka Goonethilleka were knocked out in the Men’s Doubles event, ending their…

Skipper Nilesh Wijesekara led by example to level the playing field by winning the second singles against Lashan Mendis, 21/09, 20/22 and 22/20. Things looked on the up for S. Thomas’ when Adeesh Peter grabbed the final singles win over vice-captain Druvinka Perera, 18/21, 21/19, 24/22.

It was left up to the doubles pairs to determine the winners of this years’ battle; Royal captains Nilesh and Druvinka stepped up and delivered gold in the first doubles against the Thomian leaders Dharaka and Lashan. Final scores read 24/22, 21/17.

The final match and championship decider was left up to Adeeh and Akila Peter from S. Thomas’ to battler over Kavith Jayasuriya and Daminudi Adikari of Royal College. It was the latter who stood victorious at the end of two sets, 21/07, 21/15, to take home the match and championship trophy back to Reid Avenue.

The Royal-Thomian Badminton Encounter was once dominated by the Thomians winning the first 4 encounters since its inception. The spotlight shifted in 2012, and the Trophy hasn’t seen the light of day in Mount Lavinia for 7 long years since.