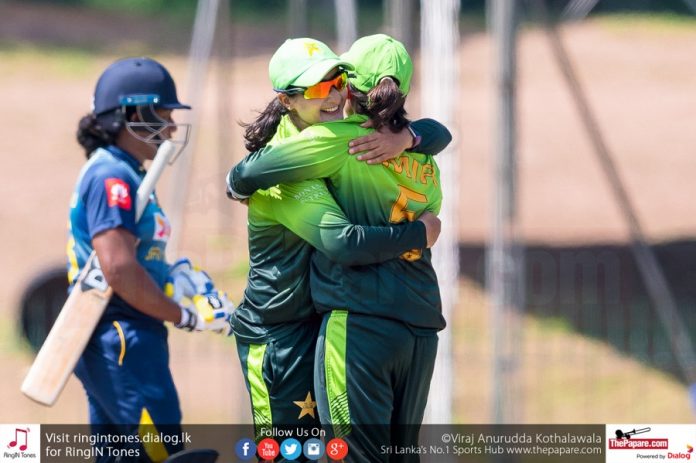 Javeria Khan‘s run-a-ball 38 and a fine all-round show with the ball helped Pakistan Women overcome Sri Lanka Women by 38 runs in the third and final T20I played in Colombo, as they clinched the series 2-1. The home side could muster only 75 for 8 in their allotted 20 overs while chasing a target of 114.

Pakistan, who were inserted in to bat, made a steady start with Sidra Ameen (23) and Nahida Khan (19) sharing a stand of 33. However, the visiting team soon lost wickets at regular intervals as they slid to 66 for 3 in the 13th over. Javeria, who aggregated a fifty in the first game, steadied the innings and found an able ally in Nida Dar (22).

The duo stitched an association of 41 for the fourth wicket before Dar fell to Oshadi Ranasinghe. The medium pacer also dismissed Javeria as Pakistan were reduced to 109 for 5 in the 19th over. The visitors could add just four more runs in the final over of the innings. Sugandika Kumari and Ranasinghe snared two scalps each for the hosts.

In pursuit of a slightly below par total, the home team struggled to keep up with the required run-rate as they suffered a major collapse. At the end of 10 overs, Sri Lanka were in deep trouble at 36 for 7. Imalka Mendis (25 not out), batting at No. 5, added some respectability to Sri Lanka’s total with an undefeated 49-ball 25, but by then, the result of the match was a foregone conclusion. Anushka Sanjeewani was the only other Sri Lanka batter who crossed the double-digit mark.

Sri Lanka’s cause wasn’t helped by the fact that they suffered four run-outs. Bismah Maroof, the Pakistan captain, bagged a couple of scalps, while Sana Mir and Diana Baig took a wicket each. Pakistan had also clinched the ODI series with a 3-0 margin.