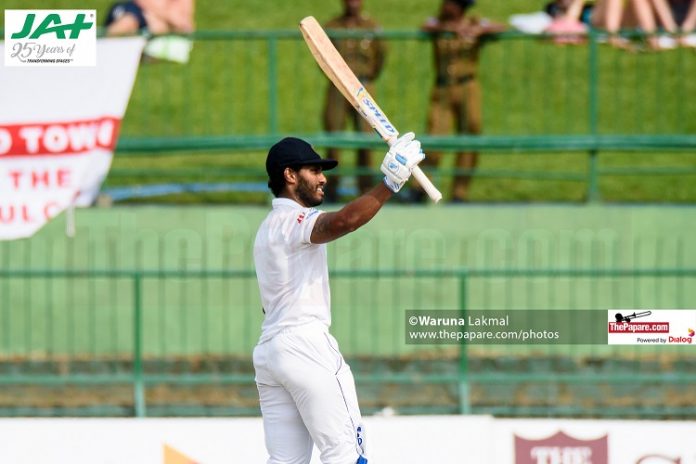 Did Sri Lanka miss a trick by not playing Roshen Silva in the Galle Test? During their 211 run routing in Galle, Sri Lanka’s batsmen lacked patience and at Pallekelle, Roshen showcased how to bat with the tail and overcome a crisis situation. His effort – a fine back to the wall 85 – enabled Sri Lanka to end with a 46 run lead in the first innings. It was his first half-century at home.

Half centuries from Dimuth Karunaratne, Dhananjaya de Silva and Roshen…

Roshen had not done anything significant to warrant a place in the side in Galle. He had gone through ten Test innings without scoring a half-century – three Tests in West Indies and two games against South Africa. To be fair by the selectors, they did give him an opportunity to come good in the two warm-up games against England in Colombo, but he failed to seize the opportunity having managed scores of 29 and 11.

Sri Lanka were in a hopeless position at 165 for six when Angelo Mathews was dismissed in the first innings, still trailing England by 120 runs. Roshen was six not out at that point and he stitched some valuable stands with the tail to help Sri Lanka to a total of 336.

For those who criticize the poor standard of First Class cricket, players like Roshen are example that the system is good enough to produce top notched players. We don’t try to hype the current system where we have got two dozen teams, but the 14 team competition before it was diluted had some impact.

The tables have turned in Pallekelle. Sri Lanka is in the driver’s…

A ten game tournament with a relegation and a promotion system augurs well moving forward. The current Test side has four players who had featured in more than 100 First Class games before making their Test debuts. Roshen is one of them and the others are Kaushal Silva, Dilruwan Perera and Malinda Pushpakumara.

Roshen’s finest hour in Test cricket came in Delhi last year when he saved the Test match against many odds. On a wicket that was turning square against the deadly spin duo of Ravichandran Ashwin and Ravindra Jadeja, he came up with a majestic unbeaten 74. More than the Indian spinners the polluted Delhi air looked tough to overcome as Roshen batted for more than three hours.

It was his Test debut and he had been dismissed for a duck in the first innings. He came into bat when skipper Dinesh Chandimal was dismissed and India only had five wickets to take and had a session and one hour to bowl out Sri Lanka.

An injury to Dhananjaya de Silva further compounded Sri Lanka’s woes, but Roshen’s calm approach to the crisis helped Sri Lanka safe face as not many teams go to Delhi and save a Test match. India were surprised at the fight back but not the team management as Roshen had done it time and again in domestic cricket and for Sri Lanka ‘A’.

In Pallekelle, batting on the first two days looked extremely tough. But for Roshen it was like child’s play tackling England’s three pronged spin attack with assurance and playing the waiting game letting the bowlers err before chasing in.

One mistake Sri Lanka have failed to do in this series is to keep England on the park for one full day and let their spinners to go on till the fourth or fifth spell. In this heat, they will struggle to survive and Roshen’s knock is a classic example as even the tail-enders didn’t find much threat against the spinners towards the end.

Roshen had waited far too long to make his debut. He was set to make  his Test debut a year before he actually did. He almost made it against Australia at home in 2016, but reservations the team management had about him being susceptible to the short ball resulted in Dhananjaya de Silva making the debut ahead  of Roshen.

He nearly gave it up wanting to play league cricket in Australia, but persevered with hope and wasn’t let down in the end.

A superb series in Bangladesh followed where he posted scores of 109, 56 and 70 not out. At the completion of the Bangladesh series, he had a Bradmansque average of 154 in Test cricket.

For the next Test at SSC, if skipper Dinesh Chandimal returns to the side, Sri Lanka will be in a quandary whom to leave out. One option would be to leave out Niroshan Dickwella and allow Chandimal to keep wickets in order to fit in Roshen.

Another option would be to leave out opener Kaushal Silva if he doesn’t get a big knock in the second essay and let Dhananjaya de Silva open the innings.