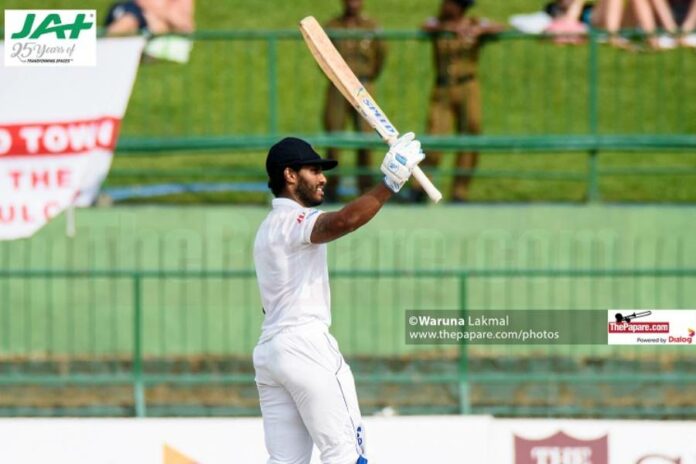 Feroz Shah Kotla in New Delhi has been a fortress for India in Test match cricket over the last three decades.

In 30 years, India had played 12 Tests there and won ten and drawn the other two. One of those draws involved Sri Lanka where the tourists played out of their skins to hold onto a hard fought draw. They owed it very much to debutant Roshen Silva, who came up with a back to the wall knock under pressure against Ravichandran Ashwin and Ravindra Jadeja on a crumbling wicket.

When Sri Lanka made the return trip to India last month, Roshen had been out of the system since the Gabba Test in 2019 and was overlooked. Roshen’s numbers in Test match cricket are quite impressive but in cricket, the numbers don’t tell you the entire story.

You may have sensed in recent times that playing spin has not been Sri Lanka’s forte. Roshen plays spin expertly with clever use of his feet. His temperament is ideal when the spinners are on top and chips are down for the batting side. Not only does he bring his batting expertise to the mix but time and again he’s shown the ability to give the side decent totals building vital partnerships with the tail. This we have not seen a lot in recent times and the collapses in India are proof of that.

One of the strategies Roshen uses batting with the tail is to farm the strike. However, there are times when the tail is exposed to more than a single delivery in an over and while Roshen is in the middle you see the batters showing more application than trying to just slog it away.

Often you tend to label Niroshan Dickwella as incorrigible given his approach to batting. But when out there with Roshen, he tends to place a high premium on his wicket. A case in point is the 94-run unbroken stand they shared in Delhi for the sixth wicket in that drawn game.

Roshen should have played a lot more than the 12 Tests he has under his belt at the moment. Often we get carried away with talent and fail to see the larger picture. Talent is of little use if they aren’t being converted into match saving or match winning efforts. Roshen has suffered in silence because he doesn’t have any godfathers in cricket to argue his case. His debut was delayed by more than a year on flimsy grounds and so has been his comeback. Now that he has been shortlisted, Sri Lanka will do well to draft him into the squad and play him at number six.

There are couple of slots opening up as well in the batting line-up with Lahiru Thirimanne and Charith Asalanka being overlooked. Both were part of the line-up during the India Tests. You need the experience and expertise of Roshen in the middle order as soon after Bangladesh, Sri Lanka will be involved in back to back Test series against Australia and Pakistan.

It’s safe to say that Oshada Fernando will return at number three with Roshen at number six. The batting looks pretty strong with Dimuth Karunaratne leading the way.

It is Sri Lanka’s bowling that worries you. The team’s recent success has been by banking on the trio of Ramesh Mendis, Praveen Jayawickrama and Lasith Embuldeniya. But there are serious problems with the pace bowling department. Now that Suranga Lakmal has gone, the team is left with huge boots to fill and it remains to be seen who will rise to the occasion. Vishwa Fernando has been Lakmal’s understudy for a while and when conditions are helpful he can be quite handy.

Kasun Rajitha has been one of the finest prospect who was expected to excel in the longer format of the game, but he’s been prone to injuries. It was a huge disappointment when he broke down after sending just 13 deliveries in the Boxing Day Test match in 2020 and the selectors have been cautious to pick him for the longer format of the game since then. But for so long he has been considered as a red ball player and now that he has put in the hard yards having played four First Class games in four weeks, it’s a time that the selectors backed him.

There’s been bit of disappointment that Kamindu Mendis has not featured in the squad. The former Under-19 captain had an excellent campaign in the National Super League where he topped the batting charts with four hundreds and four half-centuries and earned the admiration of many with his imaginative leadership. However, rather than warming the bench in Dhaka, Mendis is better off engaging in some competitive cricket in England, where he will be travelling with the Emerging team.