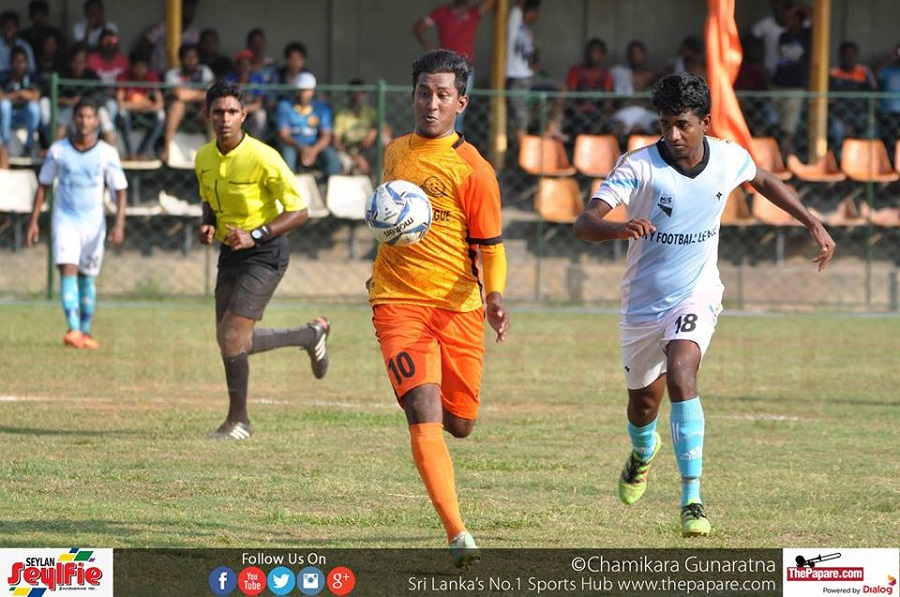 Java lane SC defeated Morgasmulla 2-0 to secure a spot in the City FL President’s Trophy Final 2017. Mohamed Rizkan scored twice for the slave-island lads in the first half, to take them in for a long awaited final.

The much hyped game was played at the City League Complex with almost a full house. Both teams came into the game with the clear intention of sealing a spot for next week’s final. Being the only unbeaten side in the tournament, Java Lane SC was the clear favourites for this game.

A solid performance from the Java Lane’s back line throughout the game assured Morgasmulla’s attack were kept under their pocket.  Mohamed Rizkhan and the co played a widely spread game gaining more territory and possession. Early shots at goal from Mohamed Abdullah & Mohamed Aleem were indeed a perfect test to Morgasmulla’s defense which looked very sloppy.

Java Lane SC managed to score their first on the 14th minute when Mohamed Abdullah danced-in from the right and chipped in for a brilliant opportunity created for Mohamed Rizkhan to score a beauty from the penalty box.

Java Lane SC piggy-backed on a sensational individual performance to take them through and it was Mohamed Rizkhan, who played a pivotal role in the midfield for them. His key passes and excellent box to box running were remarkable. Having created several chances, it was unfortunate for him that many went astray.

With the momentum building up, Mohamed Aleem’s quick thinking led him to send a through pass which Rizkhan collected it and managed to run past the Morgasmulla defence which he clinically finished scoring his second at the 21st minute putting Java Lane into a commanding position 2-0.

In the 31st minute V P Sakulada of Morgasmulla went down with the referee awarding a free kick from a dangerous spot. M.C.Gunesekara stepped in and almost scored their first goal to make it 2-1, but was denied by the woodwork.

With the 2 goal advantage Java Lane re-commenced their same form from the first half when Rizkhan again had a great chance to complete his hat-trick created from a brilliant run by Malaka Perera, but the shot went wide.

Fitness levels of the Morgasmulla’s players were questionable with most of the players looked tiring and unfit with the frustrations and pressure building up on them.

Meanwhile Janaka Chaminda was subbed in for Mohamed Abdullah for the Slave-island lads which was a tactical substitution.

Malaka Perera of Java Lane SC was moved into the right flank who then played well in his role. By far the best performance in the 2nd half. He was handy and quick, supported the attack well.

Morgasmulla needing to pull a rabbit of a hat had a fantastic opportunity to score a consolation goal from a free kick at the stoppage time but was denied by the brilliant effort taken by Dammika Senerath who blindly saved the game with the gloves for Java Lane SC.

Man of the Match – Mohamed Rizkhan

Sharing the thoughts about the game

“Very happy about the results, oppositions did give us a good fight, but we capitalized the chances we got, scored 2 goals but should have been 4 or 5. Winning was the only goal in our mind and we did it at the end of the game”

Asking further about which opponent he would like to the play the final against – ” Colombo FC or Renown, It doesn’t matter. We will meet one of these two and we will definitely give them a good fight at the finals”

“We are young team, lacked experience and lost few regular players for this fixture, we were totally outplayed in all our departments. With this tournament experience looking forward for the league, this year”