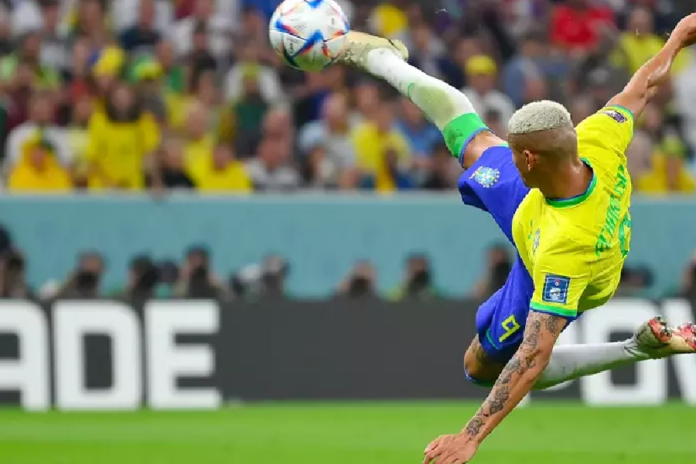 A dramatic 11-minute second-half brace from Richarlison has propelled Brazil to the top of Group G and provided the pre-tournament favourites with the perfect start to Qatar 2022.

The Tottenham Hotspur forward scored an opportunistic first before adding a spectacular, acrobatic second as the record five-time champions claimed a deserved win.

Serbia proved a tough nut to crack during a tight first half but Brazil moved up through the gears after the interval and came within millimetres of an opener on the hour-mark when Alex Sandro rattled the post from fully 30 yards.

A goal was clearly coming, though, and it was no surprise that the lively Vincius Junior helped provide it with a goal-bound shot that Vanja Milinkovic-Savic could only parry out to the waiting Richarlison.

While that goal was knocked in with the Spurs star’s shin, his second was as pure and flawlessly executed as any at this World Cup. Vinicius Junior again provided the assist and, although Richarlison’s first touch was loose, the one that followed more than made up for it as he swivelled and directed an inch-perfect overhead kick into the bottom-left corner.

His first goal was perhaps more significant in determining the outcome. Yet in assessing the moment for which this game will forever be remembered, it’s impossible to overlook Richarlison’s second.

It was the kind of goal that has made fans the world over fall in love with Brazil, and one of which any Seleção icon – of any era – would have been rightly proud.

As he led his team on to the field this evening, Thiago Silva became – at 38 years and 63 days – the oldest Brazilian ever to take part in the the World Cup. He surpassed the record set by Seleção legend Djalma Santos, who was 138 days past his 37th birthday when he played at England 1966.