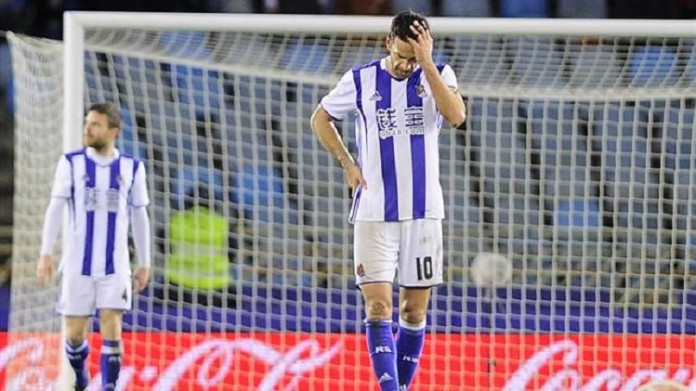 Real Sociedad missed the chance to climb above Atletico Madrid into fourth place in La Liga on Tuesday as an injury-time equaliser from Pedro Leon gave neighbours Eibar a 2-2 draw in a Basque derby in which both sides had a player sent off in the second half.

Juanmi Jimenez headed Real Sociedad into the lead in the 14th minute and was booked for lifting up his shirt to pay tribute to Pablo Raez, a 20-year-old leukaemia sufferer from the same province as the striker who died last weekend.

Gonzalo Escalante nodded Eibar level from a corner in the 26th minute but the visitors were reduced to 10 men at the start of the second half when Florian Lejeune picked up a second booking.

Juanmi earned his second yellow card for a shirt tug just before the hour mark to restore numerical parity but Carlos Vela restored the hosts’ lead in the 67th minute from the penalty spot after Inigo Martinez was felled by goalkeeper Yoel Rodriguez.

Eibar coach Jose Luis Mendilibar was sent from the dugout for protesting about the penalty decision but had something to celebrate at the end when Leon’s low shot slipped under the grasp of Real Sociedad goalkeeper Geronimo Rulli.

Real Sociedad are fifth in the standings on 45 points, level with Atletico in fourth, with Diego Simeone’s side visiting struggling Deportivo La Coruna on Thursday. Eibar are provisionally seventh on 39 points.