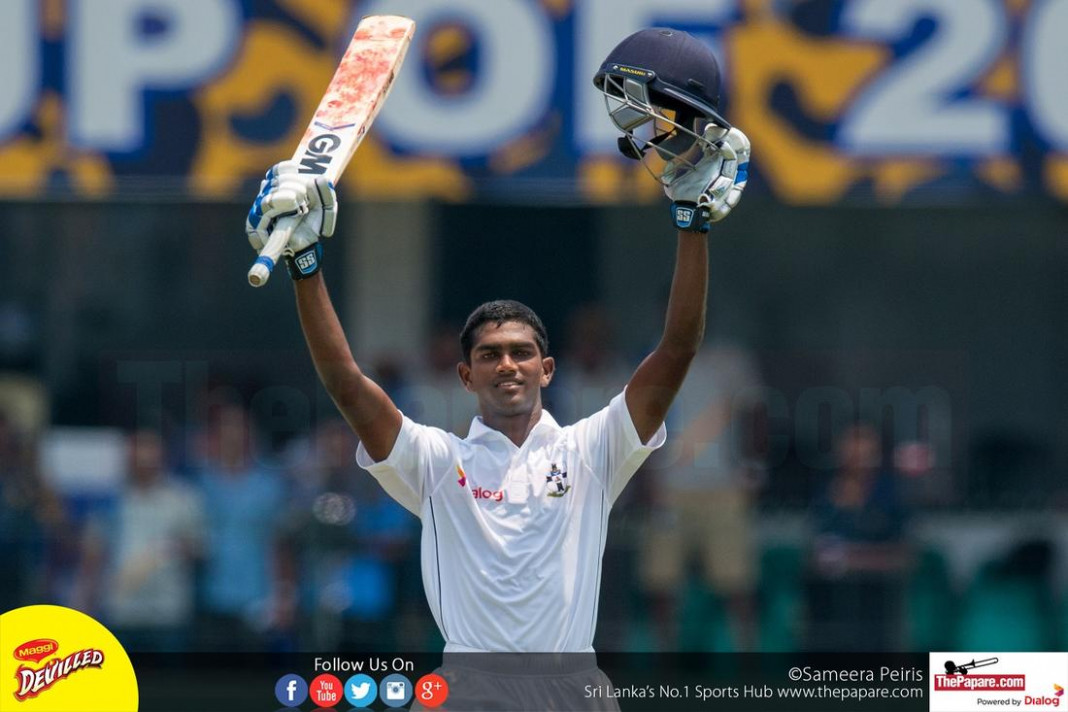 Rashmika Opatha slammed a belligerent 124 while Yohan Mendis and Sachitha Jayathilake hit contrasting half-centuries as S. Thomas’ College completely dominated proceedings on day one at the 137th Battle of the Blues against Royal College at SSC grounds on Thursday.

The opening stand of 197 between Opatha and Mendis laid the foundation to the final onslaught by skipper Sachitha Jayathilake as the Thomians posted a commanding 350.  Royal College faced only one over as rain brought a premature end to the first day’s play.  Almost 22 overs were lost today and the play on second day will start early by 9.45am.

Earlier in the first session, Royal College won the toss and sent S. Thomas’ into bat, the left-right combination of Mendis and Opatha genuinely took apart the Royal bowling attack despatching them to all parts of the ground after they opened bowling with a part-time seamer, Ronuka Jayawardene as a  surprise ploy  which obviously backfired.

Confident batting, excellent running-between the wickets and ill-disciplined bowling were the highlights of the mammoth 197-run stand. The Thomians cruised to 146 at lunch without disturbing the wickets’ column.

After the lunch break, Opatha completed his 3rd ton of the season as S. Thomas’ continued to tire down the Royal bowling. The right-hander’s 131-ball 124 including 16 fours and 4 sixes ended in the 43rd over when Himesh Ramanayake deceived the centurion with a slower ball.

Vice-captain Yohan Mendis played the second fiddle to Opatha throughout their opening stand but as soon as his partner was dismissed, Mendis too perished when he was neatly stumped by Thiran Dhanapala off Lasith Embuldeniya. The left-hander made a patient 133-ball 64 with 7 fours.

One-drop batsman Dilendra Gunathilake was all at sea as he was castled by fast-bowler Duvindu Hettiarachchi as S.Thomas’ lost three wickets in quick succession for 22 runs.

Middle-order batsmen, Ravindu Kodituwakku and Yohan Perera constructed a solid 50-run stand before the former was brilliantly caught and bowled by off-spinner Ganith Sandeepa for 35. The 16-year old Perera’s enterprising knock of 38 was ended in the 70th over by some crisp fielding and poor running between the wickets.

After being dropped on nought by Malith Kariyawasam, Thomian skipper Sachitha Jayathilake smacked his way to a stunning jaw-dropping 31-ball 50 with 5 towering sixes to entertain the crowd and put the school by sea into the drivers’ seat.

None of the Royalists threatened the Thomian batting consistently, on a surface which helped good stroke-making.  The Reid Avenue boys dropped five catches to make it a forgettable day for them.

The centurion, Opatha shared his views exclusively with ThePapare.com after the game, “I played my normal game and it was like a dream come true for me. Absolutely delighted with my performance.”