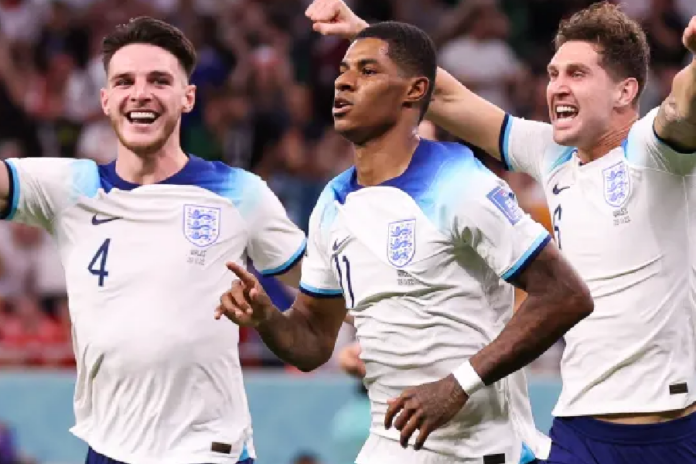 The first ever match between two British nations at a FIFA World Cup™ ended in victory for England as they progressed as group winners, eliminating Wales from the tournament.

Other than forcing a smart save from Danny Ward at the feet of Marcus Rashford, England strolled through the first half of this encounter, threatening to show signs of the stagnancy demonstrated in their goalless draw against USA, as Wales sat back in perfect shape and structure.

The second half, however, was an entirely different prospect.

Marcus Rashford lit this game’s touch paper with a sweet free-kick that rocketed into the back of Danny Ward’s net, and the Manchester United striker was involved again as Phil Foden doubled the lead – Rashford’s run provided Harry Kane with the chance to fire a low cross into Foden’s path.

The goals forced Wales into action, with efforts from Dan James and Kieffer Moore threatening Jordan Pickford’s goal and providing some long-awaited jeopardy to England’s night.

The result was put beyond all doubt when Rashford doubled his tally with just over 20 minutes to play, thrashing a shot in off Ward’s legs after a mazy run.

A smattering of substitutions allowed Gareth Southgate to rest his key players as he and England turn their attention to Senegal in the Round of 16.

So long has Gareth Bale been the star, the saviour and the symbol of Welsh football, it is almost hard to believe that there will soon be a generation of Wales fans who will not cheer Bale’s name.

The forward has undoubtedly written his name into Wales’ history books, but this World Cup has done more than finally give Bale a show on the world stage – it has introduced his predicted successor.

The 21-year-old attacker Brennan Johnson replaced Bale at half-time in this match; the youngster’s second appearance of the finals in a direct swap that could be symbolic.

England surpassed their previous record of eight goals in a World Cup group stage, set in 2018, by raising their total to nine.