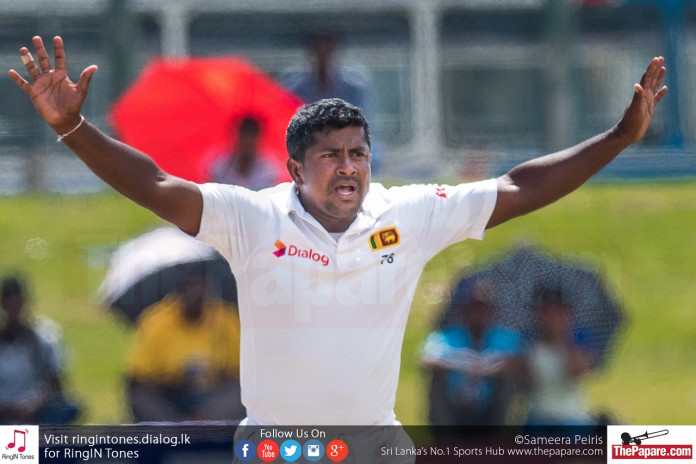 
The Windies crumbled on day four against Herath and co as they were bowled out for 227 after being 67 for 2 overnight. The visitors lost 4 important wickets in the first session which dented their hopes of a comeback.

Jermains Blackwood’s resistance of 92 was the only highlight for the team from Caribbean Islands while following up on the Lankan score. Rangana Herath ended on a stunning 10 for 147. Incidentally, this is his 3rd 10-wicket haul at Galle, his favourite hunting ground.

Sri Lanka takes a 1-0 lead in the two-match series with the 2nd game scheduled to start on 22nd of October at P. Sara Oval grounds in Colombo.

Night watchman, Devendra Bishoo succumbed to a great reflex catch by Angelo Mathews at first slip to the bowling of Rangana Herath in the 5th over of the morning. In the very next ball, experienced Marlon Samuels offered no shot to a straight delivery and was caught plumb in front of the stumps.

Few overs later, Nuwan Pradeep bowled his best delivery of the Test when he took the outside edge of Darren Bravo who pushed at a good length ball, Kusal Perera took an easy catch.

Debutant, Milinda Siriwardana proved an asset with the ball when he ousted Denesh Ramdin. The Windies wicket-keeper was tempted to drive outside his body and was caught sharply by Kaushal Silva at 2nd slip.

The visitors were looking down the barrel at lunch on 156 for 6. Jermaine Blackwood was the only batsman to take on the Lankan bowling and cut down the deficit.

Jason Holder’s stay was limited to only 26 minutes as his counterpart, Mathews made a clever run-out from first slip to send back the tall Windies all-rounder.

Right-handed Blackwood counter-attacked Herath with some lusty blows to avoid the innings defeat but his brilliant knock of 92 was ended by Dhammika Prasad in the 69th over.

Earlier in the match, Dimuth Karunarathne’s highest Test score of 186 and Dinesh Chandimal’s 2nd consecutive 150+ at Galle ensured Sri Lanka post a commendable 484 on the score board.

Herath mesmerized the Windies batsmen in their first innings as the present king of spin in the world took his 23rd five-wicket haul as the visitors were bowled out for 251.

“I started my career from Galle, There is always something for me and all spinners here.”

Man of the Match, Rangana Herath said after the match.