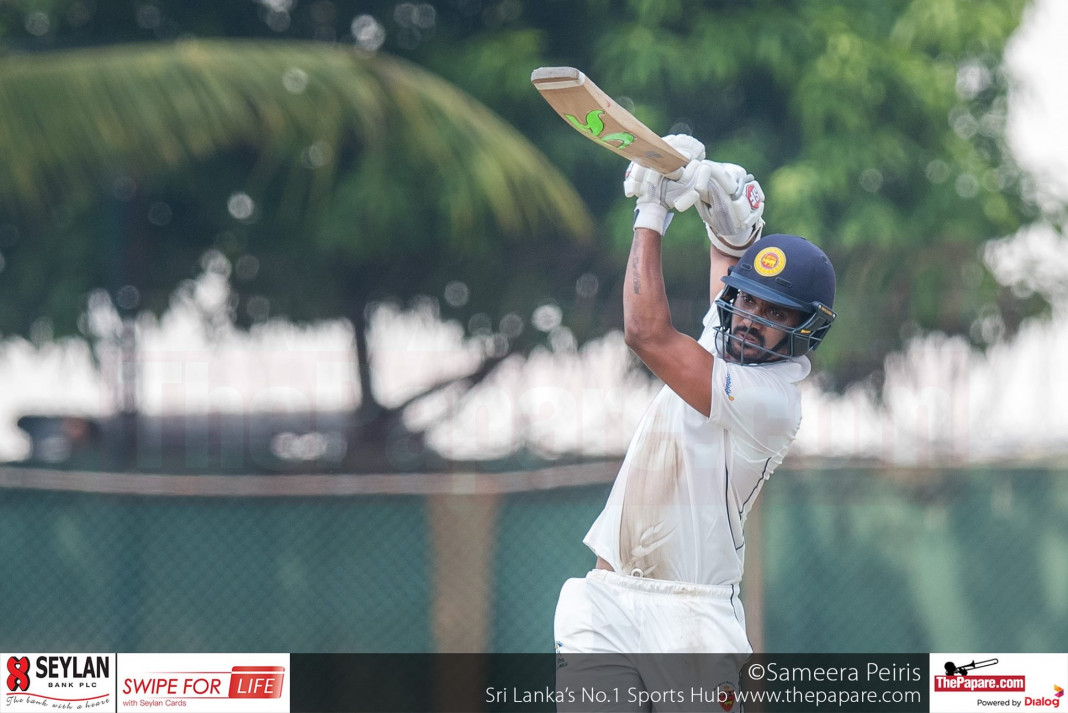 Ragama CC came from a losing position to salvage a draw against Saracens SC, while Dhanushka Gunathilaka scored a fighting century (112*) to save SSC from a difficult position against NCC. Wanidu De Silva, number nine batsman for Colombo CC stroked a surprising 116 to put the visitors in control against Colts CC.

Ragama resumed from 263 for 5 and went on to take a surprising first innings win against Saracens at Thurstan grounds.

Saracens seemed to be in control at the end of day two, only for Sameera de Zoysa (91) to put his hand up along with all-rounder Chathura Peiris (71) to propel Ragama to a commanding 448 in their first innings and with it win first innings points.

Suraj Randiv ended with 4 wickets for Saracens while Mohomed Dilshad and Kasun Rajitha took 3 wickets each.

The game ended on day three with Saracens on 5 for no loss in 2 overs.

Tamil union went on to score a massive 450 in their 1st innings. Wicket keeper Manoj Sarathchandra scored 87 from 99 balls to add to Jeewan Mendis’ and Tharanga Paranavithana’s centuries as the visitors took control from the onset.

Mendis then went on to rattle hosts Chilaw Marians with his leg spin, bagging 4 for 79. Dinuk Wickramanayaka was the second best with the ball picking up 3 for 18 in 11 overs. The spin duo worked in tandem, dismissing the home team for 219 in their first innings.

Thikshila De Silva and opener Shehan Jayasuriya was the only batsmen to shine for Chilaw with 59 each in the first innings.

The hosts were asked to follow-on and ended day 2 on 137 for the loss of a single wicket.

The game will continue tomorrow for the final day at FTZ grounds.

Wanidu De Silva came in low down in the batting order to rescue and put Colombo CC in control at Colts grounds.

Colts ended day two on 40 for none.

The game will continue tomorrow for the final day at Colts Cricket ground.

Nilanka Sandakan did not let Army off the hook as he went on to take 5 for 69 and dismiss Army for just 242.

Manjula de Zoysa was the only batsman to go past a fifty plus score getting to 90 and falling in disappointing fashion.

Moors will begin day three with a lead of 134 under their belt.

The game will continue tomorrow for the final day at Burgher Recreation grounds.

Visitors NCC added 54 runs on day 2 as they ended their first innings on 393.

SSC, playing at home, found themselves at 82 for 5 only for Dhanushka Gunathilaka to step up and score an unbeaten 112 and take the hosts to a respectable 219 in their first innings.

Chathuranga De Silva was the chief destroyer for NCC, picking up 6 for 72.

NCC began their first innings and ended day two on 27 for no loss.

The game will continue tomorrow for the final day at SSC grounds.