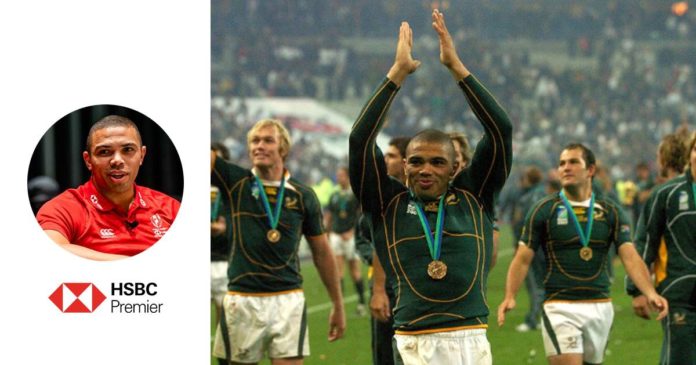 In the first episode of the HSBC Premier Webinar Series, BBC International Sportscaster, Andrew Cotter and Springbok legend Bryan Habana touched on one of the biggest yet unspoken topics in the world of sports; Politics and Racism – especially in South Africa.

Before we dive into this controversial topic, let’s go back to 1995 when Francois Pienaar hoisted the Webb Ellis Cup at Ellis Park with Nelson Mandela alongside him, as big a smile on his face as a kid who scored his first try. Then 12 years later John Smit held the old gold pot in one arm with South African President Thabo Mbeki’s on the other at the Stade de France in Paris after winning the 2007 Rugby World Cup. However, although those victories were supposed to unite the nation and bring people together, the effect seems to have been fleeting.

When the Springboks were crowned World Champions 24 years ago in Johannesburg, there was just one black player, Chester Williams, in the starting XV. By the time their second World Cup win came along, 12 years later, there were still only two black players, although the ethnicity makes up approximately 75% of the Rainbow Nation’s population.

Rugby was often seen as a white man’s game in the country and as a result many people of colour weren’t fans of the South African team, which they did not see as a reflection of their nation – In fact, Habana says the Springboks were sometimes called the “White South African team”

A big part of building unity happened in ’95 when Nelson Mandela made a very symbolic gesture at the 1995 Rugby World Cup final. Despite being criticized by his community for doing so, he wore the Springbok Jersey that was worshipped by the architects of black oppression because he believed it would unite the two worlds in his country and force black and white to look in one direction.

“Nelson Mandela saw the opportunity in the Springbok logo, he decided not to get rid of it, instead he saw a way to bring a nation together – and yes sometimes fairytales do happen – And for a 12 year old in the stands, everything about that day was so inspiring”

When Cotter asked Habana about the importance of the expansion of the game in the rural areas of South Africa, quite emotionally, Habana brought up the story of Mazakole Mapipi, the first player in the history of South African rugby to score a try in a Rugby World Cup final (The previous Springboks World Cup wins did not feature tries).  “To imagine that he walked 5kms to school and 5kms back for 5 days a week for 5 years, just to make something of himself – I mean if that doesn’t make the hair at the back of your neck rise up, you will never understand the power of sports like how Nelson Mandela said”. The World Cup winner then went onto explain how the chances of producing national players from the good schoolboys in those rural areas are minimal. The inability for those schoolboys to earn scholarships or the simple fact that coaches miss them while scouting for players cost these young kids an opportunity of a life time. Hence, he stressed on the importance of bridging the gap between the privileged and underprivileged when it comes to sports.

Habana was all praise for the 2019 World Cup winning captain, Siya Kolisi, “the Siya Kolisi story is the real one” , saying that he “cannot emphasize enough about the good Siya Kolisi has done for South Africa”. According to Habana, South Africa’s 2019 victory brought so much unification to the country even “more than the 1995 and 2007 world cup wins combined!” and he truly understood the impact rugby can make after the 2019 Rugby World Cup.

South African Sport governing bodies have taken the racial quotas very seriously since 2016 and were seen implementing and pushing towards a more 50-50 squad at all times. Hence, it’s quite clear that the great sporting nation is heading in the right direction.

Cotter and Habana highlighted the great service HSBC has rendered towards expanding the oval ball game around the world. “I always wanted to be associated with HSBC after my career” Habana said as he reminisced back to when HSBC reached out to young underprivileged African kids and donated rugby accessories as a part of introducing rugby to rural areas in South Africa. Habana believes that although ‘Power and Politics” is a part of world sports, with organizations like HSBC, unity, diversity and togetherness, could be achieved.