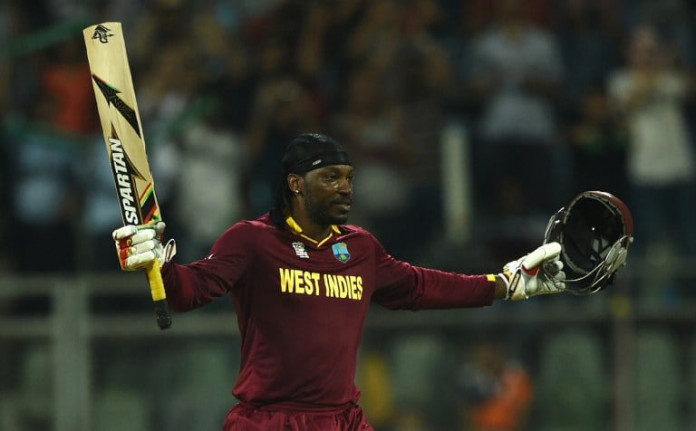 Chris Gayle said he had been on a mission to entertain after his scorching century propelled the West Indies to a six-wicket win against England in their World Twenty20 opener Wednesday.

The powerful left-hander smashed 11 sixes and five fours as the Windies successfully chased down England’s score of 182 for six at Mumbai’s Wankhede Stadium and then revealed that he had been inspired by an appeal from one of his team-mates.

“I was pumped today. Before I went out, Sulieman Benn said ‘entertain me’,” Gayle explained after hitting the third fastest international T20 century off 47 balls.

“I wanted to entertain my team-mate — he’s my drinking partner as well.

“The guys who play the IPL know it’s a good wicket so we knew we always had a chance to chase it down,” he added.

Destructive opener Gayle was largely off-strike in the opening stages of the Super 10 Group One clash but lit up the tournament when the opportunity came his way.

He hit two consecutive sixes off spinner Adil Rashid in the ninth over as the West Indies sat at 85 for two at the half-way stage of their innings.

Gayle, 36, then repeated the feat against Ben Stokes in the 11th as he single-handedly took control of the Windies’ assault on England’s total.

Opener Johnson Charles had gone for nought in the first over while Marlon Samuels had made a speedy 37 before being caught deep by David Willey off Rashid.

Denesh Ramdin went for 12 while Dwayne Bravo could manage only two, but Gayle, who was later named player of the match, remained destructive as partners fell around him.

The Jamaican, who was accused of sexism after he asked an Australian TV presenter for a date live on air in January during the Big Bash League, hit one monstrous six after another.

He clinched his century in the 18th over with a quick single as he finished on 100 not out from 48 balls.

Andre Russell hit the winning run as the West Indies beat the target set them in 18.1 overs.

“With Chris’ experience it was easy really in the end,” said West Indies captain Darren Sammy.

England skipper Eoin Morgan described Gayle’s performance as “outstanding”, conceding that he was the only difference between the two sides.

“Tonight was his moment,” Morgan told reporters at his post-match press conference. “If we’d taken Gayle’s wicket early we have got right into them.”

England’s stand came after Sammy won the toss and elected to field.

Joe Root top-scored for England with a tidy 48, including two exquisite sixes, off 36 balls.

England skipper Eoin Morgan had promised his charges would bat aggressively but they looked nervy in the opening stages and took their time getting runs on the board.

They posted just five runs in the opening two overs before openers Jason Roy and Alex Hales began to get into their groove as England reached 36-0 after four overs.

But right-handed batsman Roy was expertly caught at midwicket in the fifth over for 15 by a diving Samuel Badree off Russell, sporting an orange mohawk hairstyle.

Hales and number three Root then struck up a healthy partnership as England quickened their run-rate, reaching 81 for one after 10 overs.

The partnership was at 55 runs when six foot seven inches left-arm spinner Sulieman Benn bowled Hales in the 12th over with England’s opener having made 28.

Root then went when he miss-hit a Russell delivery straight to Jerome Taylor, who pouched the ball with ease at mid-off.

Jos Buttler made 30, including three sixes, before being caught by Carlos Brathwaite in the deep, while Morgan scored 27 not out.

“180 was competitive but we would have liked 200. At no stage did we really get going,” said Morgan.