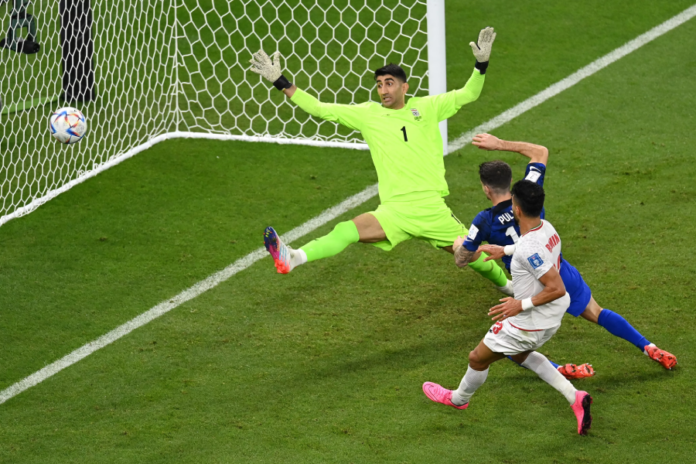 Christian Pulisic supplied the decisive strike of an absorbing contest for USA to break IR Iran hearts and set up an intriguing FIFA World Cup Qatar 2022™ last-16 encounter with the Netherlands on Saturday.

The US started at express pace, swarming all over Carlos Queiroz’s team and working Alireza Beyranvand with a header from Pulisic and Sergino Dest’s fizzing low cross. Beyramvand should have been further extended after 28 minutes but Tim Weah wasn’t aware he lacked company in the penalty box and lobbed a tame headed attempt into the goalkeeper’s gloves.

IR Iran didn’t muster a corner, let alone a shot, in the opening 45 minutes. And USA capitalised on their dominance seven minutes before the break. Weston McKennie spread a ball to Dest, speeding behind the Iranian defence, and the outstanding right-back’s first-time header across goal was met by the onrushing Pulisic to turn home from six yards. The forward was hurt colliding with Beyramvand, as he scored, and Pulisic ultimately succumbed to his injury at half-time.

Coach Gregg Berhalter’s team were ruing the offside flag that spoiled a big moment for Weah, who applied a lovely finish when clean through, by that stage. And IR Iran, knowing a point was enough to advance, returned from the break a different beast. Saman Ghoddos, sent on for the second 45 minutes, headed over from a good position, then whistled a strike past the upright, albeit IR Iran were penalised for a foul as the ball travelled to Ghoddos. That wouldn’t have counted. But a diving header from Morteza Pouraliganji in the third minute of stoppage time would have, had the ball flown inside goalkeeper Matt Turner’s post and not half-a-yard wide. That’s how close this match was, this group in fact. Three games and nine days It lasted – and the USA, just, snared second spot behind England.

We could try to be clever and identify an obscure moment that defined the destiny of this pivotal, deeply competitive match. There was plenty to observe and analyse, from the USA’s turbo-charged beginning, founded on the gallivanting full-backs in Dest and the rapid Antonee Robinson, through to coach Gregg Berhalter stringing five men across the back to preserve his team’s lead in the closing quarter hour, to desperate IR Iran penalty claims in the final seconds.

But nothing surpassed the goal from Pulisic for its significance. How could it? Without the 24-year-old’s strike, the Netherlands would have been preparing to face IR Iran on Saturday. The US would have joined a very select group of teams to go home after navigating a World Cup group stage undefeated. IR Iran would have progressed to the Round of 16 for the first time in six tournament appearances.

But Pulisic did score and the goal was worthy of settling a high-stakes match. There was courage from Pulisic, vision and technical proficiency in the pass delivered by Weston McKennie and, in Dest’s penalty-box dash and headed cross, we saw adventure and composure.

The US will need all those qualities to overcome Louis van Gaal’s Netherlands on Saturday and extend their Qatar stay.

USA coach Gregg Berhalter on match-winner Christian Pulisic, who was injured in the act of scoring: “No update [on Pulisic’s fitness], but it is a wonderful thing when one of your best players is one of the hardest working. And he is certainly that, I can’t say enough positive things about Christian.”