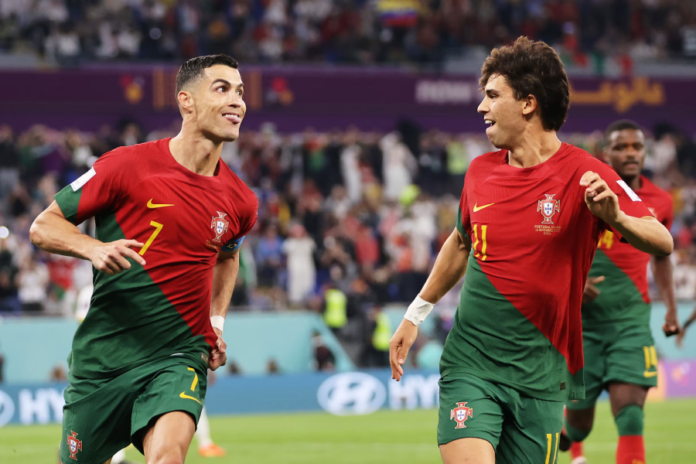 Cristiano Ronaldo etched his name into FIFA World Cup™ history by scoring a penalty but it took late goals from team-mates Joao Felix and Rafael Leao to eventually see off Ghana and ensure Portugal made a winning start to their campaign in Qatar.

Ronaldo, who had twice come close to scoring in the first half as well as having an effort ruled out for a foul, earned a penalty in the second half and rifled the spot-kick into the top corner of the net to break the deadlock and become the first male player to score in five World Cups.

Ghana nearly spoiled the moment by fighting their way back into the game when captain Andre Ayew knocked in a cut-back from Mohammed Kudus, who had come close to opening the scoring himself earlier on after a stunning solo run.

Portugal quickly took control of the game again, however, re-taking the lead when Felix produced an ice-cool finish after being played in by Bruno Fernandes. Barely two minutes later substitute Leao appeared to make sure of the victory by tucking the ball into the far corner after another through ball from Fernandes.

Ghana did not give up though and Osman Bukari scored the fifth goal of the game to ensure a tense finish. Inaki Williams then almost found an equaliser in the 100th minute of the game, slipping and failing to get a shot away after dispossessing Portugal goalkeeper Diogo Costa.

Portugal were immensely frustrated to have conceded an equaliser but Felix put them back in command with a moment of brilliance, calmly slotting the ball past Ghana goalkeeper Lawrence Ati-Zigi after a dream pass from Fernandes.