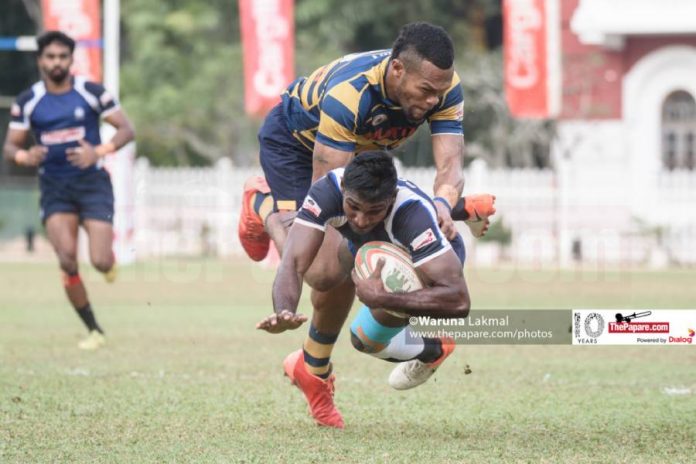 A try fiesta down at Police Park this evening saw hosts Police SC record a thumping victory over Army SC by 47 points to 31, after the two teams locked horns in their second round encounter of the Dialog Rugby League 2019/20.

Army managed to draw first blood in the encounter with a try by Dhanuka Wijethilaka though Sachin Gamage’s conversion went astray. (Police 00 – 05 Army)

Police replied in the 8th minute with a converted try, as Yohan Pieris bisected the posts, after a long pass by Emosi Vunivosa saw Kasun Rajakaruna touchdown near the left-side corner flag. (Police 07 – 05 Army)

Seven minutes later, Police SC managed to add their points tally as Rasith Silva placed the ball on top of the whitewash after forcing his way through the Army defense. Yohan Pieris was spot on with the conversion.  (Police 14 – 05 Army)

Army faced an early set back after winger Lahiru Rathnayake was issued a yellow card for an intentional knock on in the 17th minute.

The hosts pounced on the one-man advantage when a sneaky pass from Tomasi Caqusau near the Police twenty-two was snatched by Emosi Vunivosa and passed to Suranga Kasun, who managed to secure five more points for the hosts, as Yohan failed to add the extras. (Police 19 – 05 Army)

In reply, Tomasi Caqusau managed to push himself through the fringes and touchdown under the post. Chamath Fernando slotted in the straight forward conversion. (Police 19 – 12 Army)

Police responded in the restart after some terrific offloads by the Silva brothers and Emosi Vunivosa saw Primesh Danushka score the bonus point try for the hosts in the 29th minute. Yohan Pieris cashed in with the extras. (Police 26 – 12 Army)

Army replied with a seven pointer in the 33rd minute as Tharindu Bandara forced his way off the ruck and placed the ball right next to the left side post. (Police 26 – 19 Army)

Yohan Silva ensured that Police SC went into half-time with a 14 point lead as he converted Rasith Silva’s second try of the day.

Three minutes into the second half, Tomasi Caqusau came up with the reply for Rasith Silva’s try prior to the break, though Chamath Fernando’s conversion fell well short of its mark. (Police 33 – 24 Army)

Rasith Silva managed to score his third try of the day in the 52nd minute, as Yohan Pieris did justice to the conversion. The yellow card for Dhanuka Wijethilaka for not rolling away in the lead up, added to the woes of the Soldiers, as the hosts extended their lead by 16 points. (Police 40 – 24 Army)

It was Ashan Bandara who came up with the reply in the 56th minute, as Chamath Fernando cashed in with the extras. (Police 40 – 31 Army)

Tries continued to flow down at Police Park as Vageesha Weerasinghe managed to go under the post in the 60th minute off a few good passes from his team mates. Yohan Pieris completed the seven pointer. (Police 47 – 31 Army)

The game suddenly went silent as no tries were scored afterwards, even though the Policemen were reduced to 14 men after Primesh Danushka was issued a yellow carded in 68th minute.

It was an entertaining yet see-saw affair down at Police Park as both teams kept responding with points in quick succession throughout the first 60 minutes of play. Both teams managed to secure bonus points, and despite their loss, the Soldiers should take a lot of heart from this performance, as they kept challenging the Policemen continuously till referee Ishanka Abeykoon blew the long whistle.