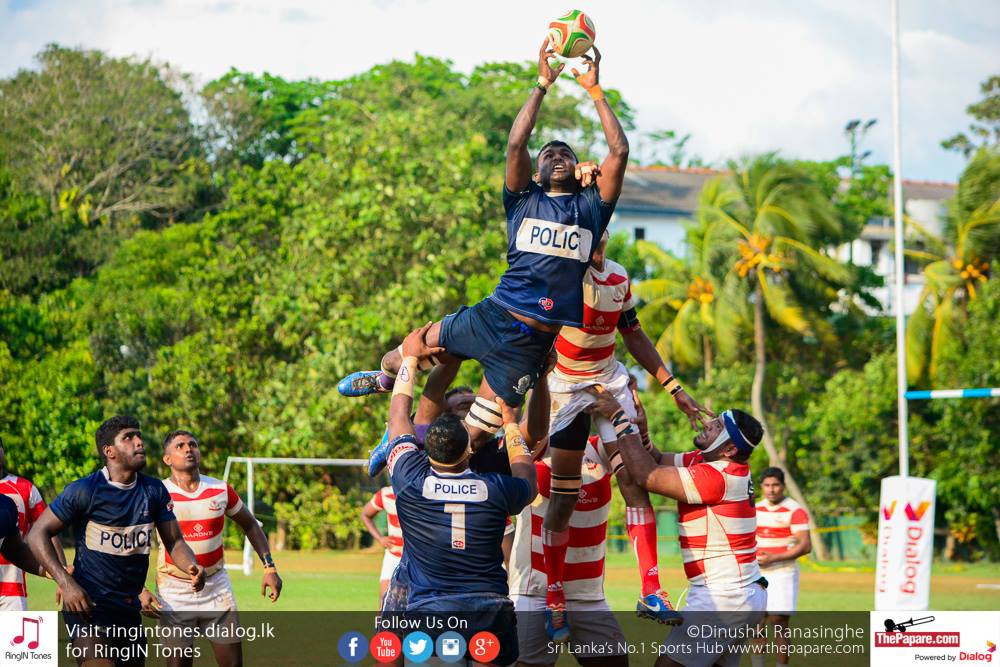 Police Sports Club registered their second victory of the season this evening at Police Park where they defeated CH & FC 26 – 21. CH & FC had superb second half where they didn’t concede a single point to Police SC and their late surge for a victory was not enough to beat the cops.


Rajitha Sansony kicked game off for the home side in hot and humid conditions at police park.CH tried to attack from the initial stages of the game. When they tried spread the ball wide from their red zone but CH knocked on the ball.Sujan Kodithuwakku the police winger kicked the ball towards the try line.Kodithuwakku managed to chased it by himself to draw first blood for the cops. Sansony was spot on with his kick. (Police 07 – 00 CH)

After scoring early in the game Police had most of the position during the first half and they continuously carried on attacking moves to score more tries but CH defended very well and they didn’t allow the cops to cross their try line for more than 10 minutes but finally Police managed to score their second try through their other winger Reeza Rafaideen. Police played more than 5 phases with their forwards and got more CH defenders committed towards tackling their forwards and finally spread the ball wide towards Rafaideen who scored for the cops to increase their lead. Sansony was unable to add the extra points. (Police 12 – 00 CH)

CH was desperate to score and they did though an penalty try which was awarded when CH winger Amith Madusanka initiated a kick and chase and when Madushanka tried to collect the ball to score from his kick an Police player blocked Madushanka and didn’t allow him to score the try and this infringement was spotted by the assistant referee and referee Dinka Pieris awarded a penalty try after consulting with the assistant referee. Rohitha Rajapaksa converted the penalty try. (Police 12 – 07 CH)

Police responded immediately to increase their lead from the line out they received near their try line. Police initiated a rolling maul and they were successful in it and they overpowered the CH defenders to score their third try of the game. Rasith Silva scored this try from the back of the maul and Sansony added the two points. (Police 19 – 07 CH)

The try of the game was scored by the cops just before half time when Mohomad Abzal ran through the CH defence to gain more than 50 meters for the cops and Romesh Achrige picked the ball from Abzal and powered through the remaining CH defenders to score their 4th try.Sansony was successful with his kick. (Police 26 – 07 CH)

In the second half the game was played at a slow pace. Lots of handling errors meant a stop start game was played .A slow pace game was ideal for CH and took the most of it when they scored through Lakshan Jayapala near the post from an pick and go to reduce the gap.Rohitha Rajapaksha added the extra two points. (Police 26 – 14 CH)

Police was trying to score more tries but handling errors didn’t allow them to increase their lead. The game was played for more than 30 minutes in the second half without any scoring. finally CH forwards were able to get through the Police defence when their prop Kalindu Kariyawasam scored their final try of the game.Rohitha Rajapaksha added the easy extra points (Police 26 – 21 CH)