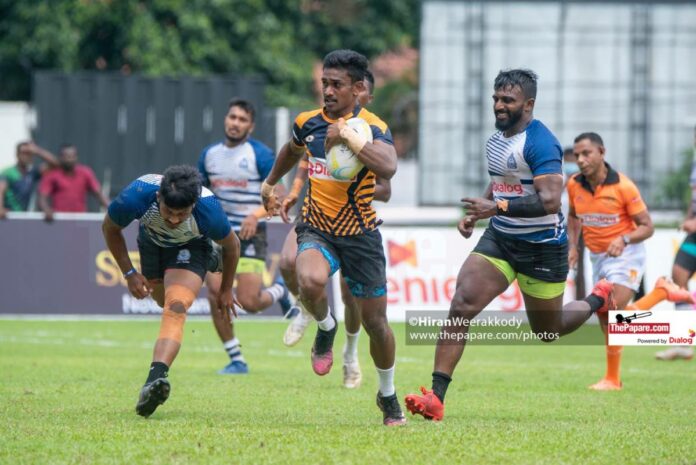 The much-anticipated Warrior’s 7s Club championship got underway today at Police Park as 10 teams battled it out for the Warrior trophy. Police ‘A’ and Air Force ‘A’ upset Havelock and Navy ‘A’ respectively to end day one.

The pattern of weak teams getting thumped continued, this time as Army ‘A’, CH & FC, Havelocks and Navy ‘A’ recorded easy wins in the second session of play.

The third and final session of the day saw Navy ‘B’ hold on after a slight scare from Air Force ‘B’. The Navy ended the first half trailing by 2-points after a valiant comeback from Air Force. The second half took on a similar fashion, as Navy stormed ahead quickly out of the box. Air Force came back, however, fell short by 3-points, handing Navy ‘B’ their first win of the day.

CH & FC had it all their way in their final outing of the day, handing Army ‘A’ their first defeat of the day. CH got off to the dream start with a try within 2-minutes of the game. Army failed to get back into the game after the early trouble.

Police ‘A’ brought back high-flying Havelocks back down to earth, defeating the Pinks in their third and final game of the day. Havelocks were held scoreless in the process as Police topped one of two groups of 3 teams.

Air Force ‘A’ stunned Navy ‘A’ in the final game of the day as a revitalized Air Force outfit got the better of a seemingly over-confident Navy ‘A’ team. Air Force ‘A’ held their opponents to nil as they scored 30+ to round off day 1 of the Warrior Seven’s.

Day 2 will kick off tomorrow (31st Oct) at 9.40 am as the all anticipated quarter-finals begin the days proceedings.