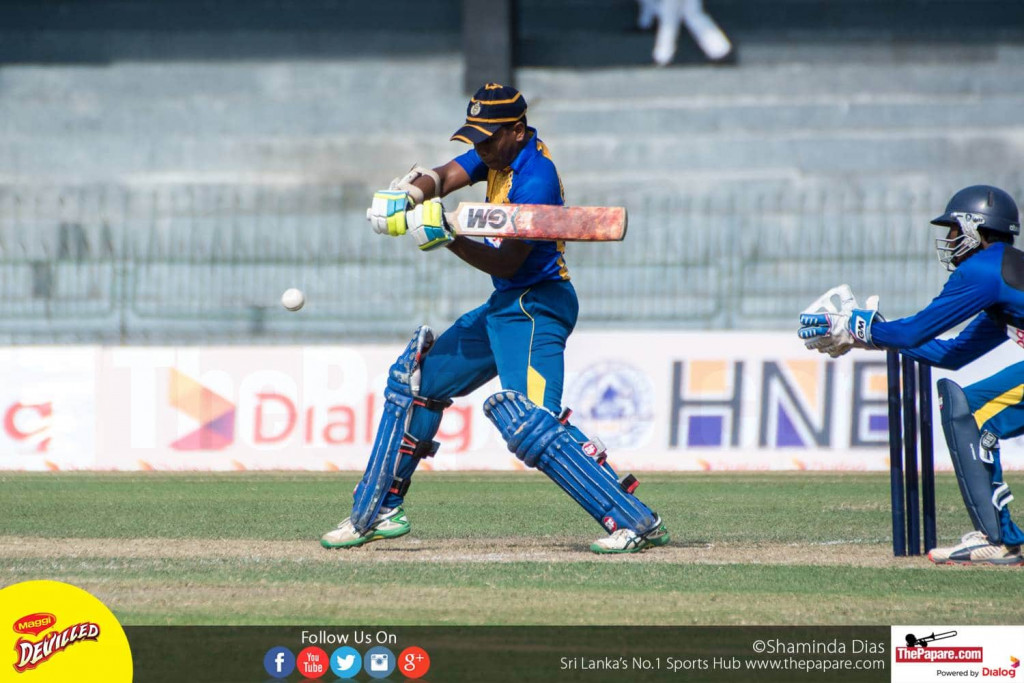 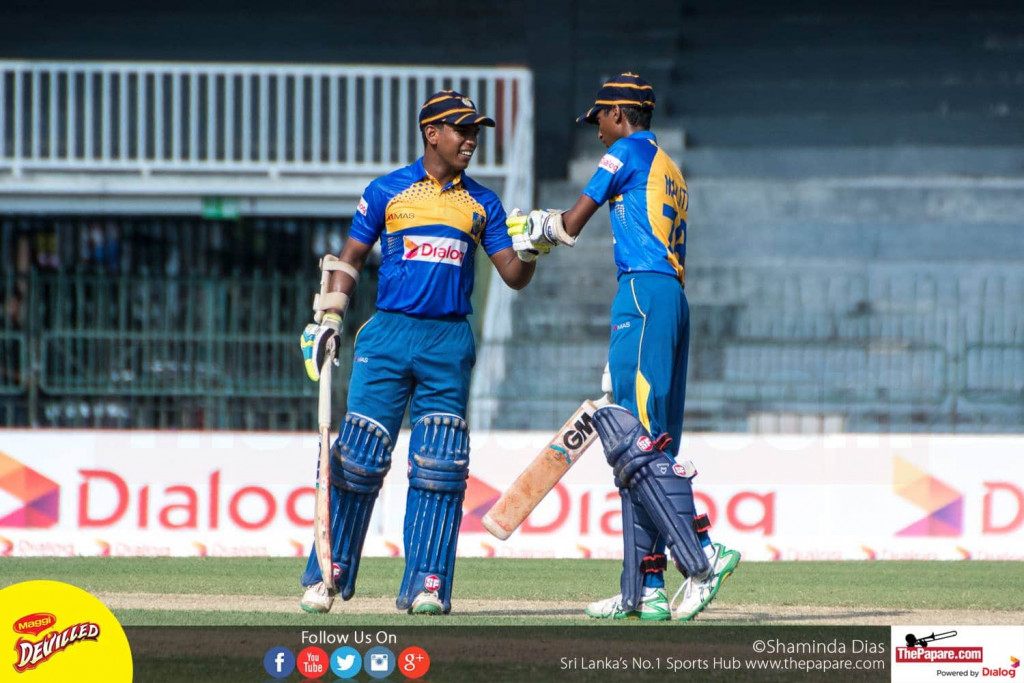 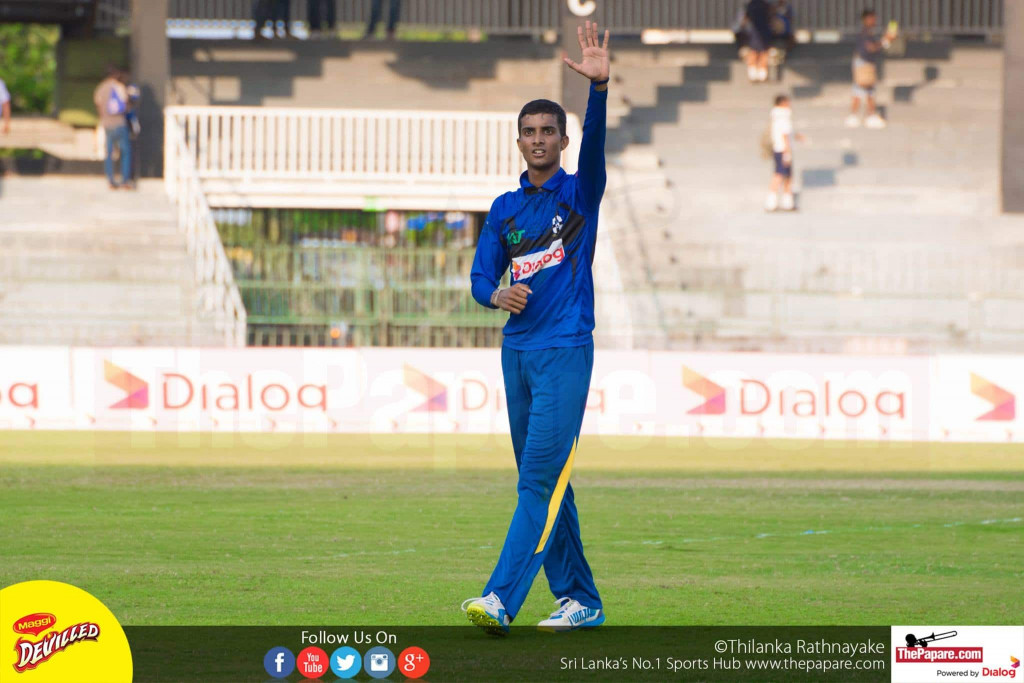 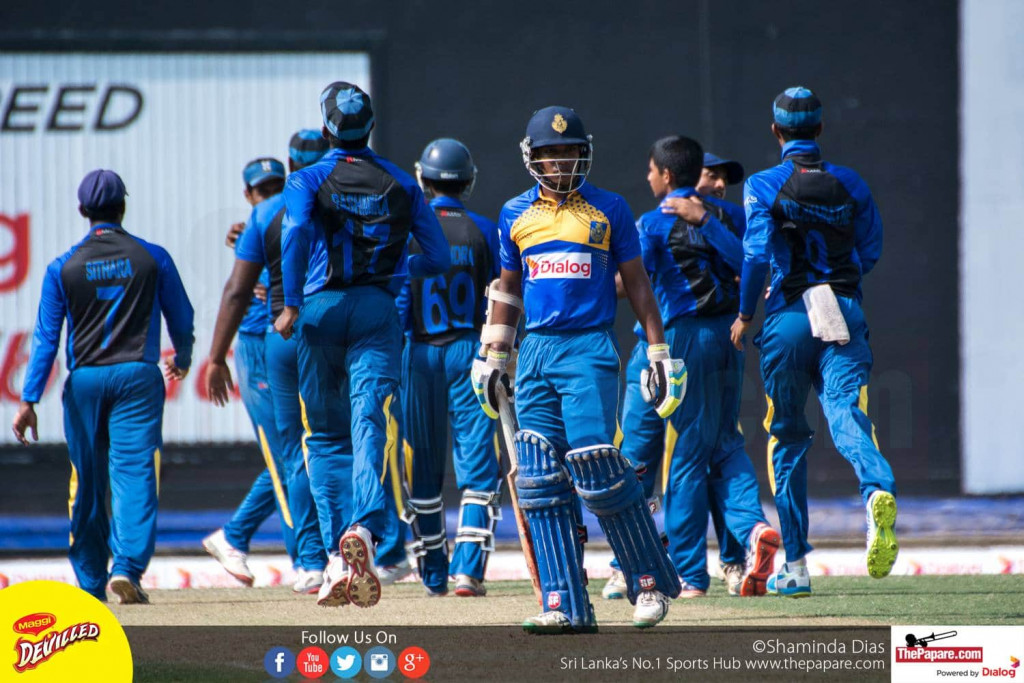 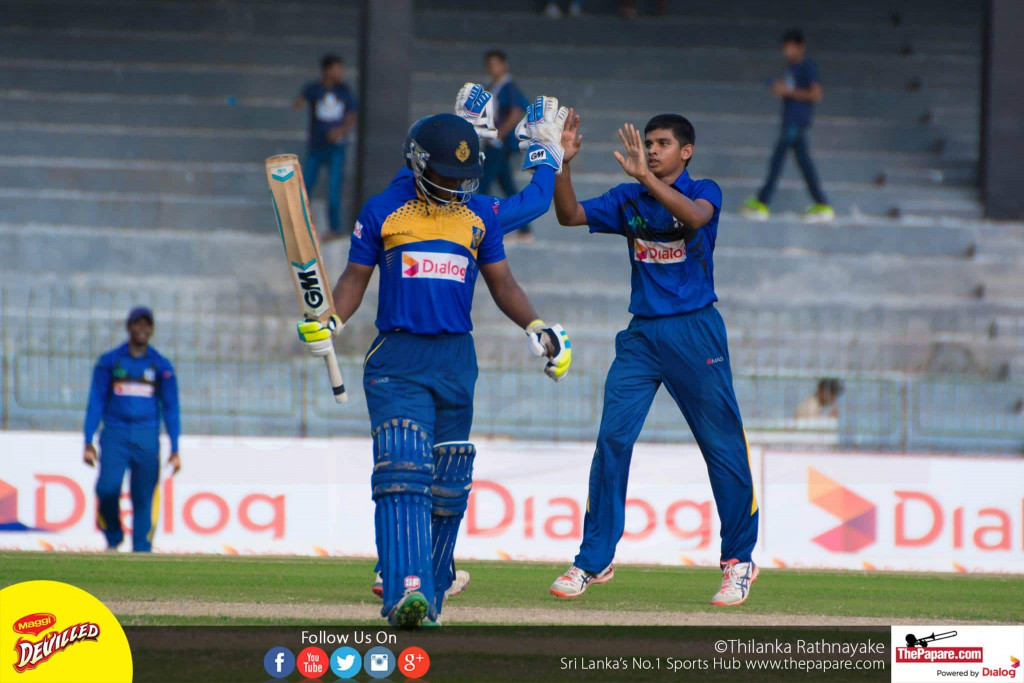 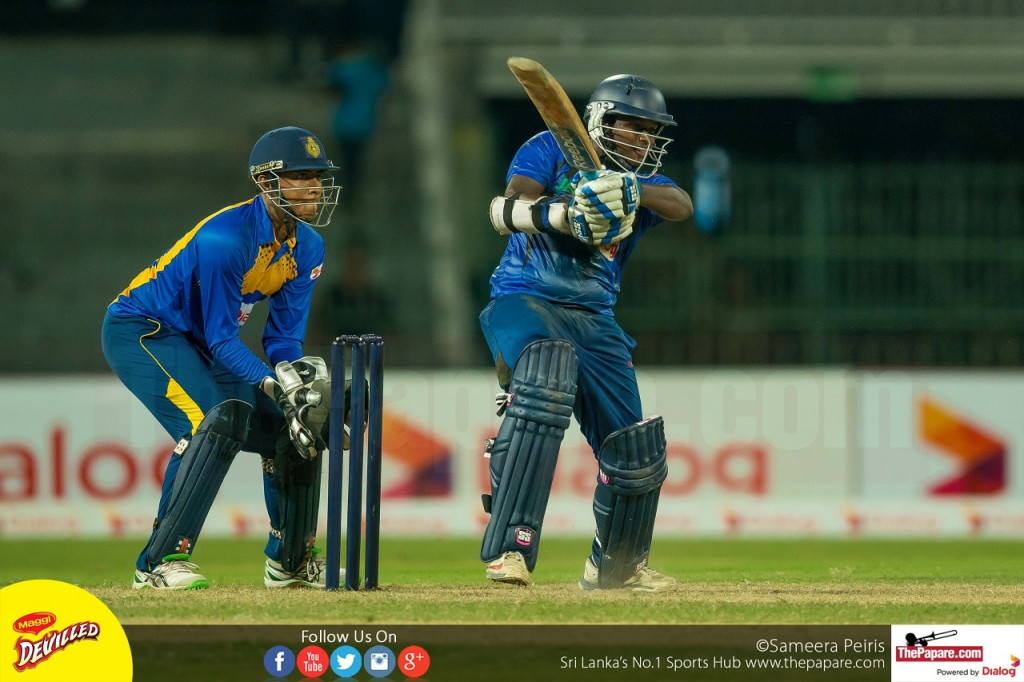 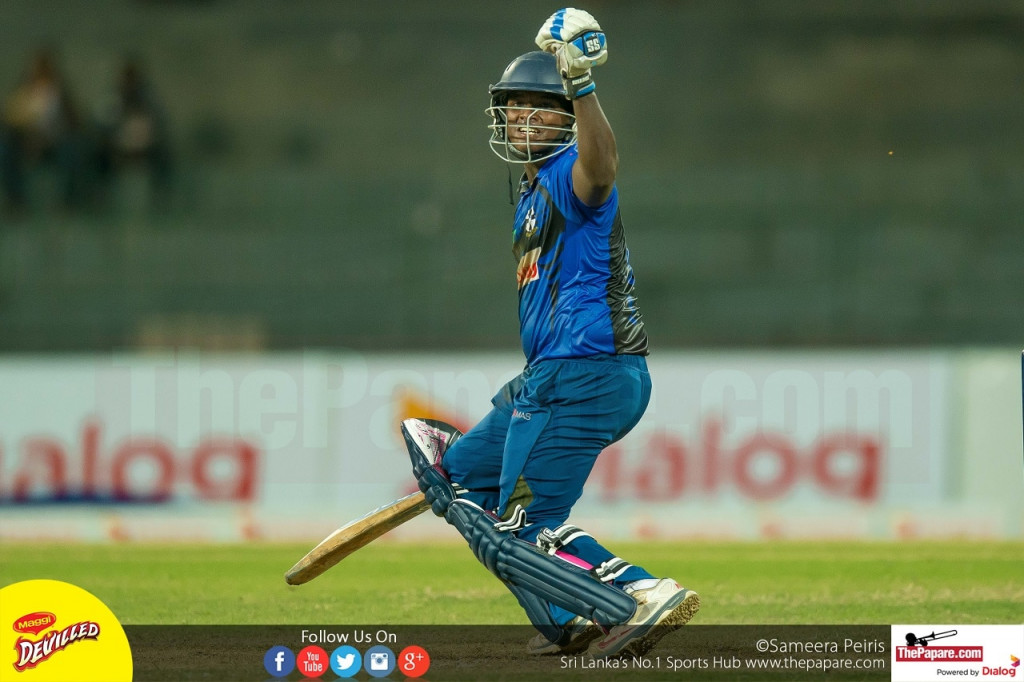 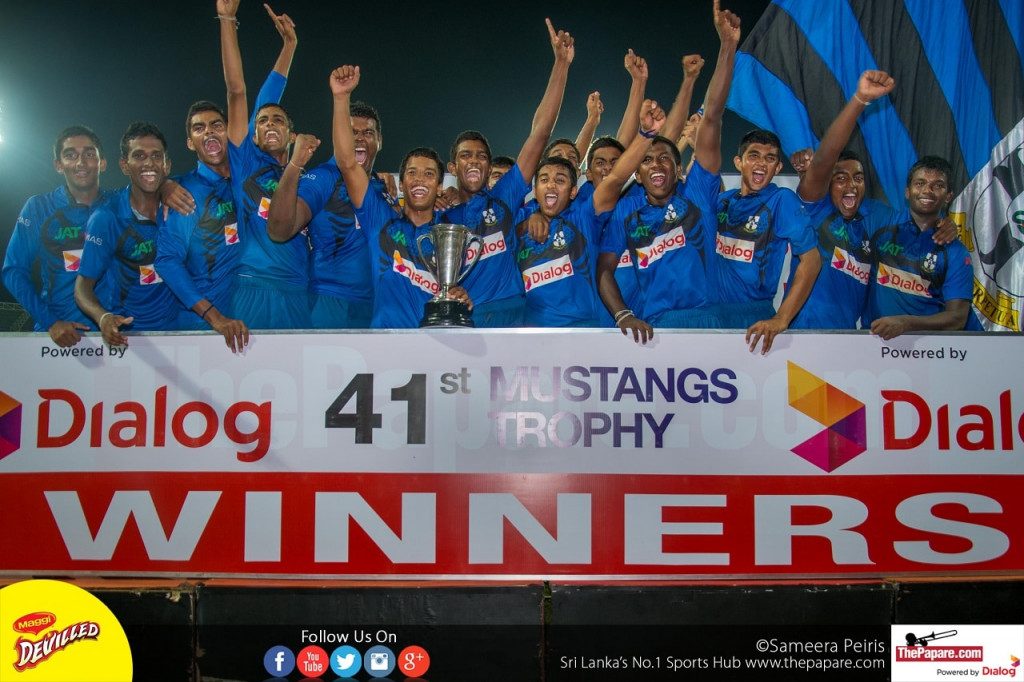 Fifteen year old Sithara Hapuhinna scored a blistering half century under pressure as he rescued S.Thomas’ College from an ominous position to win the 41st Mustangs Trophy.

For the Thomians it was once again two 15 year old freshers, Dineth Kannangara and Hapuhinna, alongside the wily chinaman Ravindu Tilakaratne who shone against their arch-rivals Royal College.

Hapuhinna came on when the scores were 99 for 4, still needing 112 runs in 20 overs, with Royal College spinners having a tight leash on the Thomian scoring. He put on a vital 53 run partnership in 58 balls with skipper Sachitha Jayathilake, before a mix-up triggered the run out of Jayathilake. At the time of dismissal Jayathilake had romped to a typical ’Jayathilake’ innings of 34 in 31 balls, with two fours and two monster sixes off Ganith Sandeepa.

Hapuhinna looked visibly distraught after running out his captain and almost ran himself out the next ball. However the youngster regrouped, to switch into ‘Jayathilaka mode’ as he went on a mission to lay waste on the Royal bowlers.

He got two fours, a Jayasuriya-esque cut shot over point and a lofted drive over mid-on, off one of Royal’s most impressive bowlers, Himesh Ramanayake as five wides in the same over turned the game in the Thomians favour.

Sandeepa managed to get the wicket of Tilakaratne but Royal were at Hapuhinna’s mercy as he pulled a six off Lasith Embuldeniya and a single later brought up the half century in 48 balls.

There after Hapuhinna paddle-swept Sandeepa off the first ball of the 46th and decided to end the match four balls later with a boundary and another massive six.

Until the Jayathilaka-Hapuhinna onslaught Sandeepa had just given 4 runs in 4 overs with one maiden. Sandeepa finished with figures of 1 for 49 in 8.5 overs.

Earlier on in the day it was Ravindu Tilakaratne, who bagged a five wicket haul, and 15 year old Dineth Kannangara, who picked four, the stars for S.Thomas’ as they restricted Royal to 210.

Kannangara was one of the three inclusions for S.Thomas’ with Hapuhinna and Ishane Perera coming in for Dellon Peiris, Yohan Perera and Hansaka Liyanarachchi from the 137thBattle of the Blues while Royal were unchanged.

Naveen Withanapathirana was the first to go caught behind off the bowling of Senal De Silva for 4. Thomian opening bowlers were moving the ball initially, especially Rashmika Opatha where he induced the edge from Pasindu Sooriyabandara. Sooriyabandara trying to drive took the edge but the ball travelling at pace was dropped by Ravindu Kodituwakku.

Ronuka Jayawardena was the aggressor scoring delightful boundaries as the Royalists added 37 runs for the 2nd wicket. However the introduction of Kannangara brought about the edge from Sooriyabandara (11), this time taken brilliantly, one handed by Kodituwakku just millimeters off the ground.

Then Ronuka (39) was caught trying to work the ball onto the leg-side while the dangerous Thiran Danapala was caught at slip by Kodituwakku giving Kannangara his third.

Royal were 77 for 4 when Malith Kariyawasam joined skipper Geeshath Panditharatne. The pair added a valuable 64 runs off 78 balls before Tilakaratne bowled Kariyawasam around the legs for 30.

Panditharatne scored a responsible 59 inclusive of 4 fours and a six but was unable to see the innings through for the Reid Avenue boys as Kannangara came onto dismiss him from a return catch. The fresher Kannangara demolished the Royal top order with the wickets of Pasindu Sooriyabandara, Ronuka Jayawardena, Thiran Danapala and Panditharatne.

Tilakaratne then wasted no-time in finishing things off with Royal only scoring 70 runs from their final five wickets. Tilakaratne finished with an impressive 5 for 36 becoming only the third bowler to take a 5-wicket haul in the Mustang’s Trophy.

S.Thomas’ in reply were restricted by tight bowling initially from Ramanayake and Helitha Vithanage who dismissed the dangerous Rashmika Opatha for 12.

Yohan Mendis, Kodituwakku and Dilendra Gunathilake all struggled against the spin of Sandeepa, Kariyawasama and Embuldeniya scoring way below a strike rate of 50 as all three succumbed to pressure.

The encounter was played as a day-night match at the R.Premadasa International Stadium for the first time since 2004.

Man of the Match – Sithara Hapuhinna