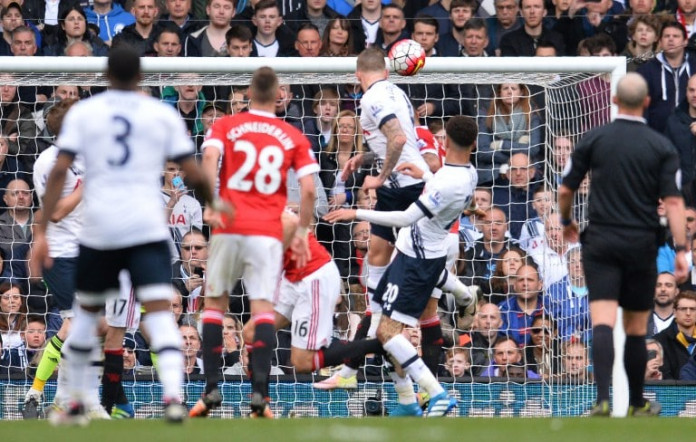 Tottenham Hotspur manager Mauricio Pochettino said that his side had produced the “perfect” second-half performance after a late rally saw them crush Manchester United 3-0 on Sunday.

It was Spurs’ first home victory over United in the league since a 3-1 success in May 2001 and Pochettino could not hide his admiration for his players’ display.

“The performance was perfect in the second half,” he told Sky Sports. “We are very pleased. Full credit to the players. It was a fantastic job. Beating Manchester United 3-0, you have to be happy.

“In the first half both teams were fighting a lot and it was not clear who had the power to manage the game, but in the second half we dominated better and started to find space to create chances.”

With five games of the season remaining, Leicester remain overwhelming title favourites, but Pochettino vowed that his team would not abandon hope of a first league crown since 1961.

“We believe and still fight, the motivation is big and massive,” said the Argentine, who revealed that he missed Lamela’s 76th-minute goal because he was in the toilet.

“We need to try to get points and try to arrive at the end of the season with the possibility to win the title.”

Kick-off was delayed by 30 minutes after the United team bus got stuck in traffic and the visitors’ attempt to break into the Champions League places is also behind schedule as they now trail fourth-place Manchester City by four points.

But beaten manager Louis van Gaal said: “Every team can lose to everybody so we are still in the race. Of course when you lose a game you have to close the gap again and that is more difficult.”

United mustered just one shot on target, via Anthony Martial, but Van Gaal said that the final outcome flattered Spurs.

“Until the first goal we were at least the equal team,” said the Dutchman, whose side tackle West Ham United in an FA Cup quarter-final replay on Wednesday.

“The better chance was for us with Anthony Martial, a big chance. We give the first goal away, a miscommunication, and then in five minutes we were out of the game.

“The second goal is a set play and our best header loses the duel. It was a fantastic header from Alderweireld. It cannot happen. But it happened.”