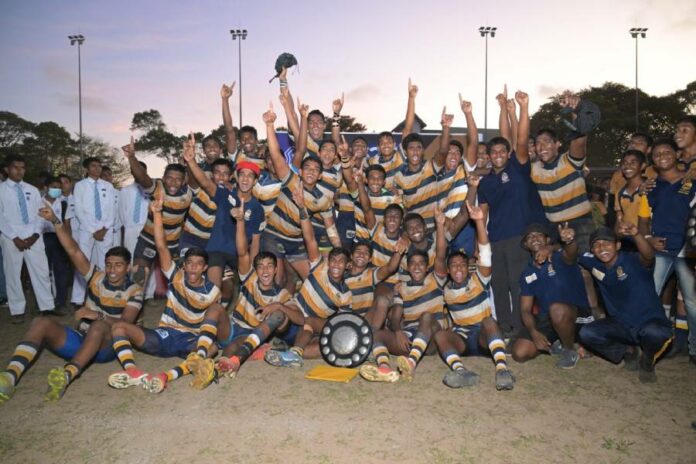 Joes were expected to run riot against the Peterite who had one of their worst season ever in the recent past. However, rising to the occasion it was the underdogs who slayed the giants putting their finest performance of the season.

In the first half, Joes dominated proceedings while Peterites struggled to maintain possession for longer periods. Half back Vihanga Randeepa opened the scores for the Josephians with the opening try. After conceding several penalties, Joes secured a five-meter lineout and Randeepa managed to creep through traffic to find the whitewash. Ruchitha Rodrigo added the extras. (SPC 0 – 7 SJC)

Joes followed it up with the second try few moments later after their big No 8 Naveen Marasinghe broke through couple of tackles, took the ball near the try line for Vishika Fernando to carry the ball under the post. Rodrigo made no mistake with the conversion. (SPC 0 – 14 SJC)

Peterites managed to open their scores few moments later through a successful penalty from flyhalf Emith Jayaweera. However, it was the boys from Darley Road who had the last laugh before lemons when Sachinthana Vidyanatha found the whitewash for their their try.

Second half was expected to be cake walk for the Josephians and it started horribly for the Peterites. Chanupa Cooray who came in an sub had to sit out for 10 minutes after receiving yellow for a high tackle. Joes failed to capitalize on the advantage and soon they too were down to 14 when Sachintha Lanka was given the marching orders.

Few moments later, matters went from bad to worse when Peterite second rower Venuk Rathnayake was show straight red for a seatbelt tackle on Naveen Marasinghe. However, the playing field was evened yet again when Randika Dhananjaya was shown yellow for Joes.

Cooray returned as Peterites enjoyed couple of minutes with one-man advantage and they punished their opponents with it. Peterite opening try came from Pasindu Thakshila who was left unmarked in the wings and simply had to carry the ball over after the hard yards earned by the forwards. Vindya De Mel added the extras from an acute angle. (SPC 10 – 21 SJC)

It was followed up by brilliant try by skipper Sudesh Jayawickrama. Credit should be given the replacement flyhalf Vindya De Mel who identified the empty space behind the Joes defense, opted for the grubber as Jayawickrama chased it down to score near the posts. De Mel added the extras. (SPC 17 – 21 SJC)

Josephians were caught napping yet again as Peterites scored their third try moments later. It was Jayawickrama this time with the initial break and he opted for the chip over which was chased down by Yumeth Sihara, who touched down inches away from dead line. (SPC 22 – 21 SJC)

Joes managed to retake the lead with a penalty in the 62nd minute but Peterites were buzzing and fittingly it was De Mel who landed the killer blow with a stunning drop goal to seal the win for the Peterites.