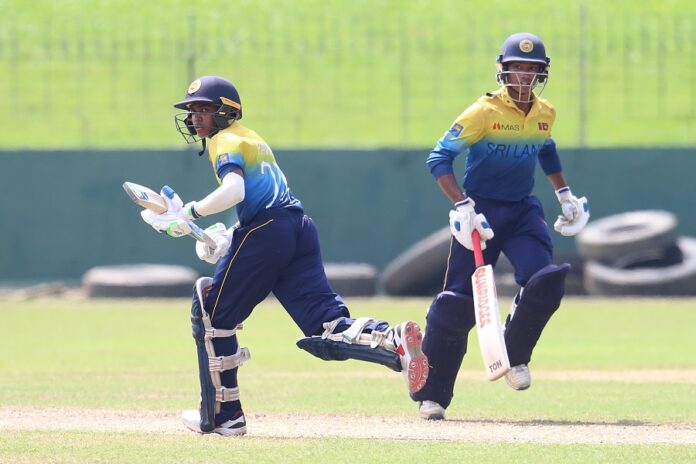 Having won the toss on a bright and shiny SSC morning, the home team undoubtedly opted to put runs on the board first.

It wasn’t the ideal start the Lankan camp would have wanted as they lost 4 wickets for 85 runs in 18.1 overs.

That’s when the man in flying form, Pawan Pathiraja and the vice-captain of the team, Raveen de Silva, met at the center to casually caress a 100-run stand for the 5th wicket.

Pawan played yet another painstakingly patient knock of 60 runs which only saw 2 boundaries in it while the rest were crossed between the stumps.

A usually busy Raveen de Silva too adapted to the situations and played a sensible innings scoring 59 runs off 87 deliveries.

That reliable stand meant that the young Lions had enough on board to go for the kill right away. They ended up posting a formidable 243 runs on board for the loss of 7 wickets.

The right-arm English seamer Benjamin Cliff was the pick of the bowling for the visitors. Cliff bagged 3 wickets for 43 runs in his 8 overs.

Playing spin has been a continuous struggle for this English outfit right from the start of the series. And it seems like it has not gotten any better yet. Even the irregulars, Shevon Daniel and Sadisha Rajapaksa managed to walk back with wickets to their name.

Raveen de Silva sprung back into action with the ball too. The right-arm leggie accounted for 3 wickets in just 3.3 overs as he was brought into the attack very late.

The slingy seamer Matheesha Pathirana also earned himself a couple of scalps in just the 3 overs he bowled as Sri Lanka used 9 bowlers in this match.

George Thomas’ 40 was the most by an English batter in the game as they were bundled out for just 117 runs.

This will be Sri Lanka’s second consecutive series win for this Sri Lanka youth team who look to be a dangerous outfit for the U19s World Cup in about a month’s time in the West Indies.