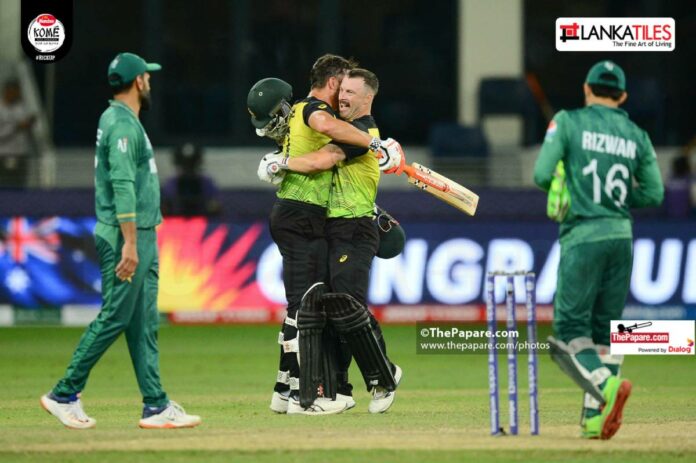 Australia produced a stellar run chase to secure their place in the Final of the ICC Men’s T20 World Cup 2021 when they defeated Pakistan by 5 wickets in the second semi-final played at Dubai International Stadium on Thursday.

Matthew Wade (41 off 17 balls) and Marcus Stoinis (40 off 31 balls) scored unbroken 81 runs off 41 balls for the sixth wicket as Australia registered the highest successful run-chase in the competition – 177 with an over to spare. After being sent into bat, Pakistan recorded a competitive score of 176 for the loss of 4 wickets as Mohammad Rizwan and Fakhar Zaman struck half-centuries.

Wade smashed three sixes in the penultimate over, bowled by Shaheen Shah Afridi to finish off the game. Both Stoinis and Wade got together when Australia were in deep trouble at 96 for 5 in the 13th over. They took some time to settle in as Pakistan bossed the game until the final five overs. Australia needed 62 runs from the last five overs, but some ill-disciplined bowling, sloppy fielding together with some exceptional hitting took the game away from Pakistan.

Earlier, the in-form Pakistani openers got off to a steady start accumulating runs without taking much risks. The highest run-getters in the competition, Babar Azam and Mohammad Rizwan added 71 runs for the first wicket before the skipper, Azam holed out at deep long-on off Adam Zampa’s bowling at the end of the 10th over. Azam made 39 off 34 deliveries with five fours to his name.

Rizwan registered his 3rd half-century in the competition, the 10th half-ton in 2021. He also became the first batter in T20I history to pass the milestone of 1000 runs in a calendar year. He top scored with a fluent 52-ball 67 which had 3 fours and 4 sixes. He was involved in two healthy partnerships, 71 for the 1st wicket and 72 for the 2nd wicket.

Asif Ali and Shoaib Malik could not provide the late flourish, required by Pakistan. However, Pakistan at the back of Zaman’s clean striking, managed to get 105 runs in the last 10 overs. Zaman struck 4 sixes and 3 fours during his excellent 55 off 32 balls.

Pakistan’s defense of 176 started off brilliantly with left-arm seamer Shaheen Shah Afridi producing probably the best first over of the entire competition. He trapped Australian skipper Aaron Finch with a peach of a delivery and almost got the better of Mitchell Marsh, who survived a close LBW call in the very next ball.

Despite the early loss, Australia stepped up their scoring-rate as David Warner and Marsh scored some elegant, crisp fours to add 51 runs for the 2nd wicket in just 36 deliveries.

Shadab Khan removed Marsh for 28, followed up with Steve Smith’s wicket as both right-handers attempted to slog-sweep the leg-spinner. Despite wickets falling around him, Warner laid the perfect platform with a fine 30-ball 49 to take Australia to 89 at the half-way mark. Soon after the break, the first ball in the 11th over, Warner was deemed caught behind off Khan. However, the replays suggested no nick albeit Warner walking off.

Shadab produced the best-ever bowling figures in a T20 World Cup semi-final – 4 for 26 when he claimed the final scalp of Glenn Maxwell, who reverse-swept to deep extra covers. After that, it was all about the Wade and Stoinis show.

The all Trans-Tasman Final will be played on 14th November, Sunday at the same venue between New Zealand and Australia. Both teams have never won the T20 World Cup before.