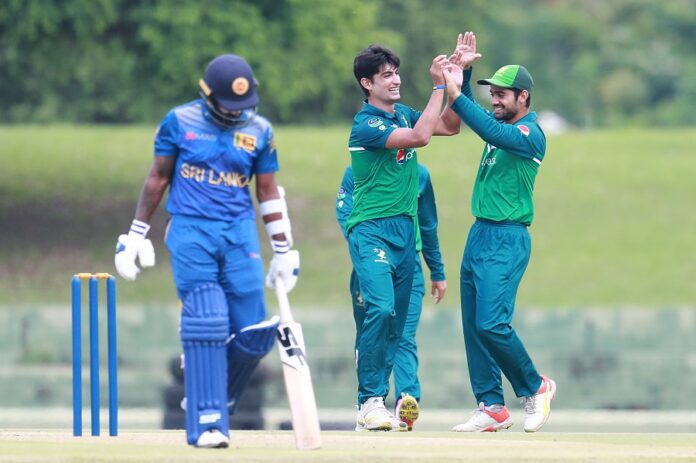 Sri Lanka ‘A’ suffered a 6-wicket loss in the first unofficial ODI of Pakistan ‘A’ team’s tour to Sri Lanka in Dambulla today, 11th November 2021.

Being led by the 23-year-old Kamindu Mendis, the Lankans were asked to bat first by the Pakistan A skipper Saud Shakeel who won the toss.

It was yet again a tough surface in Dambulla following the low-scoring youth ODI series that ended a couple of weeks ago.

Both Sri Lankan openers were sent back into the hut for duck, without having the scorers troubled.

Two more wickets tumbled within the next four overs putting the host in danger at 19 for 4 in just the 8th over. The game was pretty much done for them right there.

The young skipper Kamindu Mendis tried hard to get his team back into the game but he too was struck by Pakistan’s incredible pace attack.

The Pakistanis only had to use four bowlers to shoot out the Lankans. Three among them were genuine pace bowlers and they shared 9 wickets between them.

Up and coming Pakistani speedster Abbas Afridi was the major wicket-taker of the game. The 20-year-old right-arm seamer picked up 4 wickets for just 30 runs in his full quota of overs.

Sri Lanka was wrapped away for just 102 runs within 33 overs.

In reply, Sri Lankan seamers could not shine as their Pakistani counterparts. The two fast bowlers used in this game, Kalana Perera and Shiran Fernando, went wicketless in the game. It was the leg spinner Pulina Tharanga who brought in the first wicket for Sri Lanka during the 11th over of the innings.

The visitors did lose 3 more wickets during their chase but it was far from trouble for the visitors.

The Pakistani batters chased down the total in a flash as they sealed the game in just 21.2 overs.

Opener Omair Yousuf was the highest scorer for the Pakistanis as the right-hander scored a workman-like 38 runs.

Pakistan ‘A’ is 1-0 ahead in the unofficial ODI series.